You didn’t even want it. You said it was much too nervous,
inappropriate for us who had never owned a dog,
and wrong for our cold climate. It would have to wear a sweater,
we would become the sort of people who put a sweater on their dog.
You said a greyhound was appropriate for racing or for show,
not for friendship, not to love. It would try to hunt, I told you,
would track small cats and squirrels but obey when we said heel.
If we let it run outdoors enough, gave it enough affection,
it could live, even thrive, in the smallest of houses.
I had reason to believe it would be gentle with children.
Its limbs were bred for flat ground, would stumble on the stairs,
was your last objection. I reminded you we had no stairs. 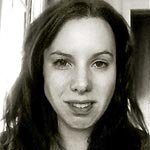 Rachel Willems grew up in Tacoma, Washington and studied poetry at the University of Washington and Boston University. Her work has appeared in The London Magazine, Tahoma Literary Review, and the Emma Press Anthology of Love. She lives with her husband and young son in Boston.