‘I’ll have a shot of anxiety with mint, vanilla syrup, and crushed ice, and a pint of despair. With a lemon wedge.’
‘That’s a very specific order—you’re obviously a man who knows his drinks,’ the bartender said. ‘Most people order straight off the menu. Are you sure I can’t interest you in a disappointment and bitters on the rocks? It’s the house special.’

‘Fair enough, one anxiety and despair coming right up.’

‘Of course.’ The bartender retrieved two glasses from beneath the counter: one short and square and the other resembling a small pitcher. He shoveled ice into the first, then took a nozzle from the counter’s side and half-filled the glass with orange liquid. As his customer looked on, he sprinkled a pinch of mint on top and then selected a thin-necked silver bottle and drizzled in the vanilla before turning to the second glass, which he filled with a thicker, midnight blue drink, and capped off by squeezing a lemon wedge onto its rim.

The man nodded in thanks and downed the anxiety. The bartender was very good…this was the stuff. He immediately felt his heart kick up in protest and blood thump in his ears. Dread gave him a sharper awareness of his surroundings; he was attuned to the woman sitting on a stool further down the bar, twirling a stem in her mouth, her glass of Cherryrose Romance half-drained; the dim lighting of the place became richer and darker simultaneously, dulling the walls and throwing shadows on wood panels as some colours brightened and others muted, and, when he looked again, everything was saturated in orange.

And all of his worries and irritations hit, the things he’d postponed doing or even thinking about. His car needed a wash, it would rust over, his brother was a stranger, his mother thought he didn’t love her, he needed to call more, he’d been overlooked again and would never get promoted, he wasn’t good enough for the job he had, anyway, he no longer cared for music—it was all noise, like traffic, but none of it spoke to him—his car would rust, he hadn’t spoken to Camilla in almost a year, he would never get ahead, or back to how things were, how they could have been, or return to what almost was, why was he a coward, a passive character, going nowhere, forever changing his mind until no thoughts were his, his didn’t deserve success, five reports due and none of them finished, no one would care if they were late, they didn’t expect anything from him, his car would rust.

‘Hey there.’ The bartender’s voice was a steady bass. ‘Looks like that one hit you hard. How about an upper? I can recommend a tonic and bliss, or something from our pleasure cocktail range.’

The man shook his head, reached mechanically for his second drink, and the bartender sighed.

‘You know, I don’t understand people. I know guys in my profession are supposed to, but I don’t. Unless you’ve walked in from a funeral or something truly awful, why go for the anxiety and despair selection?’

The man raised the tall glass as though toasting the bartender. ‘To feel.’

‘They’re my biggest sellers, you know,’ the bartender said. ‘The generic versions of what you ordered. Misery Martini with olives. Dark and Stormy. I just don’t get it. You want to feel, sure, but why not feel happy?’

The man didn’t answer; he took a swig and he remembered. He thought of the copper of Camilla’s laugh, the way her hair fell in tangles to frame her face, and knowing, even as he held her, that their fragile moment of forever wouldn’t last. He thought of how happy he had felt and how the only emotion capable of matching that measure of happiness was grief.

And, as the drinks interacted in his system, the second heightened the influence of the first, or perhaps they both increased the other’s effect, and, in any case, the man felt his worries soaked in sadness as his thoughts bled into each other, and tasted tears in his throat.

‘People don’t make any sense,’ the bartender said. ‘They choose to hurt.’

No, the man thought, they choose to feel. 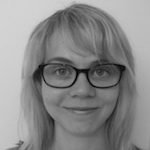 Emily Larkin is an Australian author who has published fiction in international literary journals including Meniscus, Number Eleven Magazine, The Zodiac Review, Literary Orphans, and Seizure. She is undertaking a doctorate in creative writing at the University of the Sunshine Coast, and her picture book The Whirlpool was published in 2017 by Wombat Books, and illustrated by Helene Magisson. To read Emily’s fiction, visit www.ehlarkin.com or follow her at https://www.facebook.com/ehlarkinauthor/.