It’s dark when he reaches home and opens the garden gate, shoulders vulnerable to the pulse of crickets that rattles the garden. Above, the streetlight buzzes, as it always did when they returned home from a play or dinner, sometimes talking, sometimes silent, but always in a state of satiated ease, knowing that all that’s left of the day is the comfort of their bed, the familiarity of each other’s body. He feels her hand in his like a phantom limb. After thirty years, it’s hard not to. Today his hand started the fire that burned her remains. The crickets drone their requiem—a song of late summer, when the bay exhales its hottest breath knowing it will be the last.

From the flowerbeds, dahlias droop on their thin stems in balmy darkness. Who will care for them now? He feels one blossom between two fingers, wondering if it too senses the impending lack of love and the neglect that are to follow. And he dreads the door at the end of the path, the green door with a quadrangle of glass through which a light glowed when she was home. No light now, though a welcome sign still hangs: an oblong ghostly thing.

He turns the light on and it’s all the same. He bends down, removes his shoes, as if it still matters. The wooden floor feels cooler than the air. Carefully he navigates the silent space towards the couch, afraid to puncture through the past that lingers here, a life no longer his. He sits down, like a little boy lost among the lumbering cushions, trying to remember how many days it’s been. Four, five? At the hospital, days don’t exist. It’s just a stretch of time illuminated by an artificial light that never changes.

Later, they put her in a cardboard box, like a huge present that was taken away from him and given to the crematorium fire. On the table her book is still open, Foucault’s Pendulum, in its native tongue. Two cups: one empty, and one half full of tea with a haze of milk pooling over the darkness. They sat here drinking tea and then she had to leave, just for a little while. She didn’t finish hers. He picks it up. On one side there’s a smear where her mouth touched the rim, a brown stain from tea, a tiny arc of fading lipstick. He can’t throw out this trace of her, this tiny part that’s left. He puts his lips over that spot and closes his eyes. Bits of curdled milk tumble into his mouth, contorting his aging face into that of a small child who bit into a turnip or a pepper, while expecting something sweet. Finally he’s able to cry. 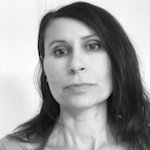 Julie Gesin was born in the former Soviet Union, where her love of reading and writing began. She immigrated to the United States in 1978. Her short stories, poetry and translations appeared in a number of literary magazines. She has also authored a screenplay, which led to an opportunity to participate in an internship program sponsored by the Writers Guild of America with the writing staff of STAR TREK: Deep Space 9. She holds an MFA in Creative Writing from Saint Mary’s College of California and lives in the San Francisco Bay Area with her husband and daughter.