Did she touch you like that, with a little more than love, a little more hurt than you want? Did you see the pain in the dulled eyes; hear the shame in her slurred words? Did you know the room was not safe?

I knew when I turned in the dark that I should not switch the light on—not because my clothes were thrown on the chair, or the book on my desk was opened to unfinished homework. No, I knew that the door was open a crack letting in eyes that were too familiar. My family was not right about sex—about the fact that I was growing up. A sixteen-year-old boy who was still uninitiated. Someone who was innocent about the ways of the world, even if I saw hints of it in movies and glanced at books left unread on my bedside table.

No, my grandmother pranced about in panty hose, showing off her slim legs and bragging about how she smuggled Nehru’s ruby back in her private parts. And Aunt Kate, somehow related to my mother, would tell of her humiliation of what sounded like rape in the backseat of a car somewhere in the Midwest with some son of someone important. Pete, the only boy in my mother’s family, would joke about all the women he had before and after he was married. My cousins, his three girls, told of much worse.

The stories piled up around the dining room tables: Stevenson’s small penis, his affair with aunt Jinx, and Ike; what did my grandmother say about General Eisenhower? The world I heard spun with unhappy love affairs, children born out of wedlock—bastards they called them—and butlers who molested everyone as he took laudanum up to my great-grandmother, who hardly ever came downstairs to Sunday dinner.

Heads rolled back with laughter, as Oscar Wilde jabbed a bit harder and someone—aunt, cousin, or uncle—said you look too good, or muttered they’re a homo you know. This gossip was sprinkled in between elevated dinner discussions about the Cold War, Lend Lease programs, farm subsidies, and the Marshall Plan—Acheson, the Dulles brothers, de Gaulle and other notables.

But I sensed, not in words, that my grandmother’s black bathroom—tub, sink, toilet, and bidet—was more than a stylish statement. My grandfather, my father’s father, slipped down the elevator with weak heart in a silk bathrobe to his lover across the way. For how many years did he sneak through the garage to her apartment looking over the East River? Some said Madame so-and-so came to my grandfather’s funeral on Madison Avenue in 1959—she sat way back in the last pew at Saint James—while Great Uncle Edward stewed at my grandparents’ apartment, shocked to learn of the many years of his brother’s infidelity. My grandfather’s mistress said good-bye with my grandmother and family singing in the church, and Uncle Edward did not. After all, my grandfather was very witty and so successful that the duplicity of living with black bathrooms, lady friends, and weak heart was forgiven by some.

At Sunday lunch, I was lucky to sit at the children’s table—an octagonal escape in the alcove looking east over the river to Queens—away from the hurts, disappointment, slights, and hands reaching for reassurance. The conversation was civilized, full of don’t you knows, and unexplained asides that did not add up. We children looked at each other, not knowing in words what was right or not—that would come many years later after we decoded in private conversations what they, our elders, were really saying at Sunday lunch.

My mother did not say anything too direct, or even point to the part of her life that was not happy; not as my father turned away and found a mistress, like his father, brother, and many others, to warm his bed. But I knew that her touch, her hug was more than a mother’s love—she wanted comfort from the coming storm of tears that would tear her apart. I closed the door instead. I learned how to hug in that cold way we adolescent boys do—to protect us from unknown passions. Nobody taught me this; how to close down, but her pain, their pain was not mine.

Maybe I understood the dinner conversation—the table at which I didn’t sit—the words touched my ear, as I looked at my cousins and wondered what was going on. Each of us knew that our parents would soon divorce, sleep in separate beds with others, or take to drink. Maybe I learned then why we run away, how to escape all that is not right, and how to look as though all is okay. It is hard to say. I turned in circles during those teenage years and walked slowly away from that family—many of us do.

Of course, fifty-five years later, after many were dead I heard the true meaning of the words “Don’t touch, don’t open the door”—I heard a totally different story at the dining room table. I really didn’t know what I just let in, but I could listen as I sat there with my wife and my mother.

That’s right, a non sequitur, an apology almost, and the story of my mother’s rape on the SS Cunard as it sped to England in 1938. She was barely thirteen, or maybe twelve, and she was handled late in the afternoon in her room in a way that nobody should. I didn’t hear the details, nor did my mother tell all over our late afternoon lunch. Her story slipped out in response to talk of sexual abuse. Fifty-five years later her trauma was on the table for the first time, as we passed the peas and murmured horrified words at what we still could not bear to hear.

That spring afternoon, I finally touched the chimera, the ghost, of the woman torn by secrets, turned by drink, and Papagayo husbands—worse than most cuckolds. Sex was not a pleasure for her when it started with rape. It did not lead to love. I could then hug the woman, my mother, who was devoured by demons; a woman I turned a cold adolescent shoulder to, so many years ago.

And what did they say, my grandparents, at the dinner table to my mother as the boat rolled in the middle of the Atlantic Ocean in 1938? “It’s just a crush, sweet Lucia, just a crush. Your father’s friend finds you so pretty, so very cute in your pigtails and white dress with frills.”

I see why we tell those white lies at the dining room table and move on. A crush, a look, something not said, not pretty. My grandparents did not say hold the hurt, let the soul bleed…But the manners of the day instructed you not cry at the table, not to tell the true story; they said no screaming anywhere, at any time. We will not hear you, we will not see you.

I didn’t until my mother was long dead. 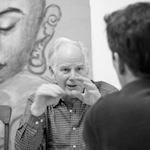 A professor at Brandeis International Business School, John Ballantine took his Bachelor’s degree in English at Harvard, with an M.A. from the University of Chicago and a Ph.D. in Economics from NYU Stern. He has published economic commentary in Salon and the Boston Globe. His literary work has appeared in Crack the Spine, Existere, Evening Street Press, Forge, Lime Hawk, Oracle, Penmen Review, Ragazine, Rubbertop Review, Saint Ann’s Review, Santa Fe Literary Review, Slippery Elm, and SNReview. He writes to understand the world we walk in and touch our complicated lives.