As a retired college English professor, I much enjoy editing manuscripts part-time. Clients find me via a University of Virginia website called Professors as Writers, a service intended for UVA faculty and grad students seeking help with their writing.

The service is also available to anyone else accessing the site. About five years ago, I received a call from a Nigerian man who lives in Virginia, teaches full time at a university, and had just finished drafting a book manuscript that was a defense of God and Christianity.

I accept only editing jobs that intrigue me, and I need to feel compelled by the writer’s way of being. When I do accept a job, I do so not for the money, which I appreciate, but for the likely satisfaction of helping a dedicated writer achieve her or his literary goals.

Because, on the phone, the Nigerian professor spoke such eloquent English with such an enchanting dialect, because he comported himself with such heartfelt gentility, kindness, and generosity of spirit, and because the emailed introduction to his book embodied such theological and linguistic magic, I felt compelled, excited, and honored to take the job.

To do justice as his editor, I soon realized my need to channel him. Ignoring my own knowledge of Christian theology became essential, invaluable, and, after a short period of struggle, quite easy.

What triggered my decision to “become him” theologically and emotionally was, early on, my frequent compulsions to challenge his ways of understanding and explaining essential Christian matters as the conflicting emotions of Jesus on the cross.

At times, I found myself wanting to call the writer up and debate his explanation of, say, “Father, why hast thou forsaken me?” In order for me, as his editor, to help him craft his best possible case for his readers, I soon realized I needed, as fully as possible, to become him and not me theologically and emotionally.

At the same time, I needed, of course, to be me as editor, bringing myself to understand precisely what he was trying to say and working to improve the clarity and style of writing so it always expressed his theology in his own unique voice and style, never mine. “Becoming him” theologically and emotionally helped enable me to do so.

Channeling brings to mind mimicry—what I do when learning a new song or tune. I’m a passionate player and singer of traditional old-time Southern Appalachian tunes and songs preceding bluegrass. (In the 1940s and 50s, primarily for the purpose of professional stage performance, what we call bluegrasss prang from the age-old, down-home traditional mountain music that I play and sing.)

Although not raised in the South, since the mid 70s I’ve been a devoted traditional southern-mountain-style fiddler, guitar player, and singer, enjoying especially 1920s and 30s recordings of talented, accomplished 19th-century hillbilly musicians and singers and mimicking them as honestly as I can.

When mimicking, my intention is to replicate the traditional Southern styling as closely as I can and yet end up sounding like me, Dick Harrington, in my own personal version of Southern styling, which I’ve spent decades developing and refining, driven by my passion for that good old mountain music done with credible authenticity.

Mimicry is, of course, learning to do, as well as possible, what someone else does. Editing, in this case, required just that in two dimensions. The first was making myself, as it were, truly accept and believe only the writer’s version of Christian theology.

So many theologians have attempted, for example, to explain what was happening in the mind of Jesus when, according to the New Testament, from the cross, he said, “Father, why hast thou forsaken me?”

Some may argue that Jesus’s question is rhetorical, intended not for God’s ears but for the ears of all the people in hearing distance from the cross, the implied answer being that God has never in any way “forsaken” Jesus or anyone else and will never forsake those who truly believe, even though in times of great distress they may feel as though they’ve been forsaken.

To do my job as editor, I couldn’t allow myself even to ponder, no matter how compelling, other reasonable interpretations than those presented by the writer, my employer, my boss. So I deliberately shed my tendency to weigh my own interpretations and remade myself into his theological student, excitedly awaiting his next insight and doing my best to edit his text in accord with his views and his alone.

The second involved the other thing most editors strive to do. In transforming the text to make it clearer, more succinct, grammatically appropriate, we do so in the writer’s own voice and style—the best result being that, when the author reads the edited text, s/he recognizes as her or his own, phrases that s/he didn’t actually compose in that way.

Although I was raised a Christian, I’m not a Christian. But I do often experience life spiritually, meaning that a bull elk in a high Colorado meadow becomes more than a large brown four-legged animal with a huge rack of antlers. Likewise, blossoms of Indian paintbrush and columbine and the soft rustle of aspen leaves quaking at dawn.

When we are spiritually present, the world becomes more mysterious and wondrous than it may have seemed as in the ethereal fiddling of West Virginia’s legendary Edden Hammonds playing Queen of the Earth and Child of the Skies.

Making myself a vessel for the writer’s Christian beliefs/interpretations, I apparently opened other channels in myself as well. For, while doing that editing job, I witnessed in my cottage my very first ghost ever and then, over a period of several weeks, twenty-one more apparitions/spirits/specters, each distinctly identifiable, some in black and white, others in Technicolor.

The first was a large, muscular man dressed in 19th-century work clothes, standing in the doorway of my bedroom. When I awoke and saw him, a seeming intruder in the flesh, I leapt from my bed and charged him full on, intending to drive my right shoulder into his gut, wrap him up, and take him down, my muscle memory having kicked in from years of ice hockey, football, lacrosse, wrestling.

Turned out, when I hit him, there was no there there. He was just air there—because either I was delusional or he was, in actuality, a ghost, which I’m convinced he was! My advice? Unless you’re a go-for-broke adventurer, avoid channeling with every fiber of your being. 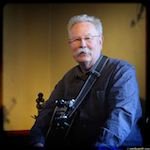 In his cottage in Ivy, VA, besides editing clients’ manuscripts, binge watching Netflix series, reading, fiddling, singing, and playing his guitar, Dick Harrington writes poetry, novels, and essays as well as an ongoing memoir entitled Not Peeing into the Wind. He was recruited by the University of Virginia to serve as co-director of the Central Virginia Writing Project and was founding faculty of Piedmont Virginia Community College when it opened in 1972 and taught there for nearly forty years.