California Girls was the lyric that bumped the bass held together by a woman’s sweet, altered, voice that tasted like vanilla but left a burn like bottom shelf vodka; and Elsie Malabago loved to hear this sort of tune on 93.5 POP! Radio, cruising with the windows down in her Mother’s old ’99 Corolla—before her Mother’s heart gave out and she died in that car cursing Papa in Tagalog and staring Elsie in the eye to say “putang ina,” whore, with her dying breath—but Elsie forgot that morning because it wasn’t Mother’s car anymore, it was Elsie’s (and fuck it, her dead Mother’s Corolla meant freedom, All-American labor day sale kind of freedom), and it meant traveling with her girlfriends to Asbury Park or Philadelphia or Brooklyn where they’d meet decent looking boys with ugly intentions; however, this wasn’t what she was thinking about now. Her present was a dreary party that played dated music and served cheap liquor mixed with dollar store fruit juice from a cracked glass bowl and the girls here laughed too hard, and the boys were ugly with rotted minds of ill-intent, and her Mother’s ghost was there too, hovering near the speakers angry at the kind of woman her daughter had become. Elsie lifted her cup and smiled at her Mother’s apparition, so ghoulish and grey in a stark white Confirmation dress that it made Elsie chuckle although Mother used to terrify her. Her death was a giggle and others couldn’t see it. Mother may have died angry enough to haunt her brown ass—but it didn’t matter for Mother could not control her life—and Elsie Malabago vowed her narrative would be post-immigrant and post-trauma and post-fuckoffwithyourbaggage from what her Mother shoved down her esophagus. Malabago would be as American as California style vanilla soft-serve fair-trade organic fake-ass ice cream. And she loved every drop. 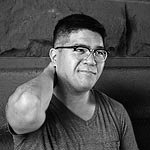 Mark Galarrita is a Filipino American writer and a graduate of the 2017 Clarion West Writers Workshop. His writing can be found in McSweeney’s Internet Tendency, Electric Literature, Split Lip, and elsewhere. Follow him on Twitter or his website markgalarrita.wordpress.com.