It’s a cold February day. My parents and I are visiting Saint James School to decide if I will go there in the fall. I am in the ninth grade at Sligo Junior High School; I am lost there between the “hoods” and the “nerds,” not fitting into either group. I want to be a “hood,” of course, because they’re the tough, cool guys.

I’m a bit scared of the idea of going off to boarding school, living with 120 strangers. I’m also anxious because tonight The Beatles are to make their first appearance on the Ed Sullivan Show, and I’ve made my parents promise to get us home in time.

The Assistant Headmaster shows us the new classrooms, the library, a typical dorm room. The boys are getting ready for Sunday supper, the only meal of the week when they don’t have to wear coats and ties. A cacophony of music, mostly unfamiliar soul music, echoes down the corridors. It’s an alien world to me.

As we go down the stairs, preparing to leave (we’ve been invited to stay for supper, but my mother, remembering her promise, has declined), I hear a familiar song amidst the noise. I stop; listen.

When I say that somethin’, I want to hold your hand…

Tonight, I’ll barely hear those words, as everything will be eclipsed by the screams of the girls in Ed Sullivan’s audience—girls I want to be with, though I’m not sure why. But now, on these stairs 80 miles from home, they’re clear, and they’re enough. I think I’ll try this prep-school thing.

It’s cold. Winter is coming. I am with Kitty, my girl friend. By that I mean we are friends, not yet dating, so there’s that gap between “girl” and “friend.” We’re at her friend Betsy’s apartment on Water Street in Chestertown and about to go explore the Colonial waterfront house across the street that’s being renovated. Just before we leave, Betsy puts on a record, Donovan’s The Mandolin Man and His Secret, and leaves it on as we walk out the door and down the stairs:

He said, “I wanna hear all that’s pretty,”

He said, “I wanna hear all that’s nice”

The song follows us down the stairs and out the front door. As we cross the street, I hold Kitty’s hand and imagine all that might come to be. It’s a perfect moment.

Tomorrow we’ll drive out by the river and walk on the beach. I’ll photograph Kitty in her Navy pea coat, holding a weed, smiling at me. I’ll write a poem about that moment. The rest will never come to be. 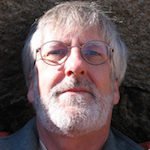 David Roach is an amateur writer and retired computer systems analyst who lives in Faber, Virginia.