Charybdis and the River

Do you hear the gurgling river?
All the molecules of oxygen and hydrogen
in their special dance, choreographed,
washing memories clean,
liquid fingers wearing grooves
into the banks.

White water foams, restless.
I, on the other hand, am the undertow,
placid above,
roiling dark beneath,
unpredictable.

Soothing sounds hide
the maw that swallows
without trace.

Remember me, I murmur:
I am the scar.

She used to think she could open
any man like a book, run her finger
along the lines, hover over a word
let it sink in
slowly

Feel how it tasted.
How it permeated.

It was her own book
she wanted to open,
spread the pages wide,
feel an index finger
run down her spine.

She shaped words into songs,
tapped into bloodstreams.

The words shimmered and danced
and blurred,
to be erased
in time. 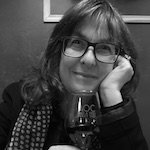 Anca Segall was born and raised in Romania during a communist dictatorship, and arrived in the US just in time to witness Watergate. She is a professor in Microbiology at San Diego State University. She loves fountain pens and not-too-peaty single malts. Her poems appeared in The Coachella Review and Sediments Literary-Arts Journal, and won LCk Press’s Summer 2017 Poetry Contest.