I had long been convinced that destiny had intended me to be born and bred in Italy. Instead, I grew up in suburban Chicago. In September 2008 I set out to rectify fate’s error. Together with my husband Bill and our ten-year-old son Asher we would rent an apartment in Bologna, Italy for three months. It was a city whose streets were practically paved in tortellini and prosciutto and then, for good measure, covered over with miles of graceful porticoes. My husband and I were artists who had spent our youth among the angst-ridden expressionists of 1980s New York. Now in middle age, we had come to appreciate the harmonies that Italy had to offer. 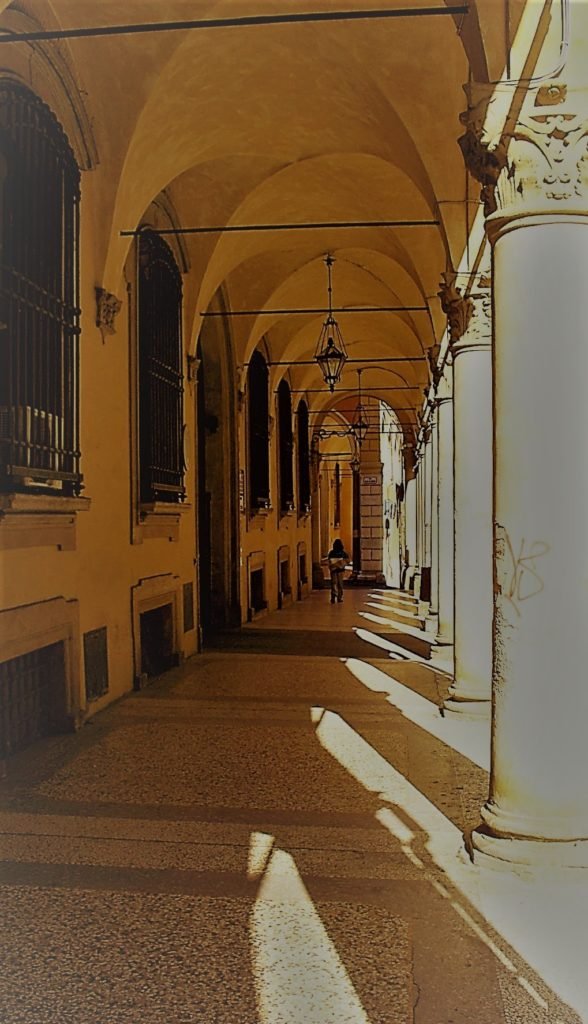 Shortly after deplaning I was already basking in the Italian sounds and smells as much as the visuals. Even the pigeons seemed to be saying ciao.

Even the task of organizing our new-to-us kitchen seemed thrilling, as we were playing house. As I peered into the cabinets the thought occurred When was the last time I lived in a house that didn’t have any salt? To me, a major perk of middle age was an endless supply of baking necessities and cleaning agents. But now we were starting over. Writing a shopping list seemed pointless since it would have contained just one word: everything.

Although there was a large grocery store near our apartment, it seemed a sterile, not especially Italian place to begin laying in supplies. We opted for the Mercato Chiesa Nuova, the New Church Market. When our landlord’s son described it to us I pictured outdoor stalls with cheerily striped umbrellas. It was actually a shed of corrugated metals of varying hues cobbled together to make an all-weather shelter, the sort of place you’d go if you had an airplane in need of maintenance.

The dimly lit space was bursting with aromas of vegetation and raw meat. At the north end of the shed the tang of fresh fish asserted itself. At the southern end, the parmesan provided a topnote. Between two rows of vendors were the customers, mostly pensionati. These retirees had plenty of time and very high standards, making them a force to be reckoned with.

The woman ahead of us in line for the greengrocer spoke in a voice that combined argument and cajolery.

“I need six good tomatoes. The ones you gave me last week had no flavor.”

The greengrocer shrugged his skepticism and counted out six faultless (to my eye) specimens.

“Questi sono buoni, Signora. These are good,” he said.

The woman looked at them fixedly as if they were letters on a Ouija board. Having divined their quality she paid and loaded them into a mesh sack already bulging.

I enjoyed watching the drama play out as if it were an instructional Italian video designed exclusively for my amusement. Asher was less enthralled. Quite possibly he had a very real allergy to waiting in line and so he sought to entertain himself by meowing his best cat impression.

“Why don’t you go to the stall that sells the cookies and get some for us?” I said desperately trying to save face among the other shoppers. I was just about to give Asher some key words and phrases for the transactions but he interrupted me.

“Sure. There’s no better way to learn a language than to use it in real situations.” 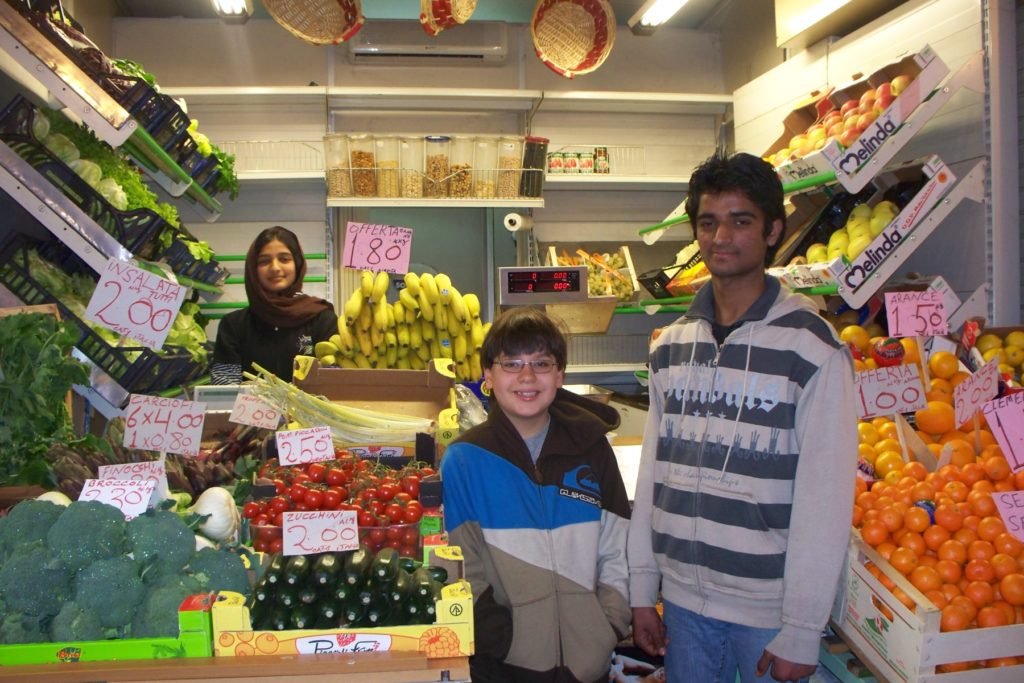 But not too shy to carry on a monologue in cat.

I sent him to find Bill instead. My husband had been drawn to a stall laden with plump thighs of hams of prosciutto.

Alone I wandered around listening to negotiations for perfection. The metal walls echoed with “Non quella, questa ! Not that one, this one,” as old men in tweedy cardigans and old women in boxy skirts angled for the best cut of beef and the freshest fish. Was there more at stake than their next meal? Perhaps the quest for perfect ingredients was more far-reaching than the corrugated metal confines of Mercato Chiesa Nuova. Were the pensionati perhaps in search for a distant moment when all the fruit had been sweet, all the greens tender?

It took us perhaps an hour, but we completed our shopping. Nestled among the chicken and produce was a shrink-wrapped package of toilet paper peeking cheekily out of the top of a plastic bag. What better way to advertise our stature as apartment dwellers than a product that fairly screamed, “No hotel room for us. We are apartment dwellers and we take care of our own bathroom supplies, thank you very much.”

Already looking forward to the next day’s museum, I planned to do a chicken cacciatore, something savory and festive for our first dinner. Only I forgot the salt. 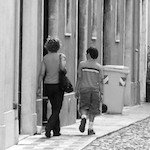 Stefanie Newman grew up fifteen minutes from the Leaning Tower of Niles, Illinois and now lives in central Virginia, where she worked as a painter and art restorer. In recent years she has traded in her brushes for a Microsoft Word program as a means to describe the world as she sees it. It turns out that writing is more difficult than painting but the dry-cleaning bills are considerably less.