Private Wilson hesitated at the precipice. It felt like a long time since his Sargent had barked, “Wilson, GO! GO!” Technically, Wilson hadn’t heard it, the air rushing by the plane was moving by so quickly that it hijacked all speech and left angry roaring wind in its place. Still, he knew what the Sargent had said, there was no mistaking his squinting eyes and tensing body trying to squeeze out sound and even though Sarge’s skin seemed to be blown back, trying to take his facial features with it, Wilson could still make out the remnants of a circle of lips, struggling to make the final ‘O’ sound in ‘go.’

Still, Wilson stood there. It had only been two weeks since he had been rousted from his bed in the middle of the night and conscripted. His younger siblings had watched in silent horror as Wilson, the oldest, had been read the Rights of Conscription by the recruiting officer and then tossed in the back of the large, armored military van right outside the house. The Rights of Conscription sat in his stomach like a fungus, colonizing his body and brain. They weren’t his rights, as he had always assumed they would be. They were the rights of The Management to his body and brain, or at least his body, because his brain was still not convinced to jump out of that plane.

He turned slightly and saw his similarly pale and trembling comrades. They looked young and frightened too. Many, like him, still had their original legal tags sticking out at odd angles from under their billowing cases. There was no going back. He was but one the middle of a line of soldiers, that like the war, seemed to have no beginning and would have no end. He closed his eyes, squeezed himself for comfort, and jumped.

The ground moved toward him with surprising speed. His siblings used to tease him because he had never had much loft and had somehow believed this might slow his descent. He probably should have taken that physics class when he had the chance. Still, the slight swaying back and forth ought to help some, he knew enough to know he was not in a vacuum. Shaking the thoughts away, he undressed and deployed his parachute. After a quick upward jolt, he started gliding down, back and forth in what felt like a sing-song motion. It was surprisingly peaceful and except for the extreme cold due to his nakedness, he was more relaxed then he had been since this nightmare started.

He landed gracefully, softly, even. He quickly slid on his case and tried to get his bearings. There was an unsettling, soft haze in the air, and he began to recognize the crumpled shapes of some of his comrades, even those who had jumped behind him, strewn about the tarmac. He saw bodies and fabric, and worst of all, piles of feathery viscera. He crouched down and vomited until his stomach was empty save the fungus of conscription that even the horror of war could not dislodge.

They were a small group, those who had survived. Some had made errors during the jump. Some died for modesty. Most had been ambushed by the invisible enemy as they landed. It is hard to fight a disorder, Wilson thought. They are cruel and unpredictable. They have no rules, not even the flawed Rights of Conscription. This disorder showed no mercy when it showed itself at all. The last half-hour had changed Wilson. He was foam-hard and hated insomnia now. He was ready to fight. He straightened his case, roughly ripped off his tag with his teeth and walked to the beds with the other survivors. 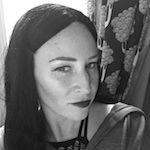 With an undergraduate degree in sculpture and a J.D., Carla Myers followed the most logical path to becoming a writer. This year she retained a significant number of body parts, but not as many as she had hoped. She is the winner of the flash-fiction writing contest at The Gateway Review, Columbia Journal Evolve Special Issue and a finalist for the 2018 Nancy D. Hargrove Editors’ Prize for Fiction and Poetry. Her work has been published in The Jabberwock Review, Patheos, Muse/A Journal, Streetlight, Convivium, Ethel, Sonic Boom, Panoplyzine, The Finger and most recently selected for The Sonder Review’s The Best Small Fictions Anthology 2019.