I began making photos, suddenly and unexpectedly, in 2005, when a dear friend was diagnosed with cancer. Making photos help me to fill temporal-spatial, psycho-social holes and, on rare good days, to enjoy the flow.

Other than that, as Wittgenstein wrote in his Tractatus, “Some things can not be put into words. They make themselves manifest. They are what is mystical.”

Now, my cRaZy quilt background is unrelated to my photography. I earned graduate degrees in both business administration and philosophy and consulted/taught higher education for 30 years at two community colleges and five universities, after 10 years of planning, developing and marketing educational products for New York-based publishers like Esquire and Harcourt.

So my former life, to my mind, had minimal impact on my explorations of photography except that patience, persistence, trial, error, fearlessness and dealing with rejection are mind-sustaining for all artists including photographers.

My graduate degree in philosophy taught me that philosophy is a process of identification, analysis, explication, exploration and evaluation. Beyond that, I have no formal philosophy of photography.

If asked, I would say I’m a confessed outsider and recovering academic in the process of refreshing myself as an EXperiMENTAL photographer and writer.

Living in downtown Chicago about five blocks Southwest of the Water Tower, I walk around my neighborhood every day with a SAMSUNG-SM-G930V cell phone in my back pocket, but not to capture images.

Sometimes, suddenly and unexpectedly, I see-hear something that yells, “Hey, you! Wanna p-lay?” And, I reply to myself, “With plea-sure.” So, I take out my cell, find the camera icon, point and pRRRess. Gently. Later, I find the image and open it in Adobe Photoshop Elements 9. At APE9, I tweak countless color and black and white variations—until one shouts, “Please save ME!” Then, I convert to black and white some images to show the stark contrast, both optically and psycho-socially, between their subjects’ aspirations and reality.

Occasionally, I’ll intuitively merge two or more images on my cell to construct a montage as I did with Dream Lover, an amalgam of a woman getting her hair styled at TRIO on Wabash and a mannequin in the window at Barney’s on Rush Street.

Photographers I admire include Alfred Steiglitz, Henri Cartier-Bresson and Garry Winogrand, among others. And, their influence, in some cases, is to capture the crowd rather than the parade and, in others, to familiarize the unfamiliar and vice versa.

My thoughts on my individual photos are diverse like assorted flavors of jellybeans. They range from images that are pre-fab to those that are custom-constructed. None here are pre-fab, that is, just point-click-captured as they were, pure and simple.

All of my work is dedicated to my true love, sweet muse and bodyguard, Suzi Skoski Wosker Doski. 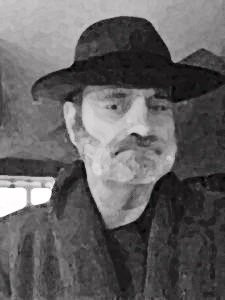 James Ray Paradiso is a resident of Chicago. His photos have appeared in dozens of publications both online and in print including Chicago Quarterly Review, Into the Void and Typehouse.