I know I’m falling asleep when I slip under the cowcatcher onto a bed of hay. Strands of hay poke through the bars of iron used to clear the track of obstacles impeding the train’s journey. I curl up and feel protected and safe behind these bars. I trust that the train will guard me with its power. My holy place is a train station.

I remember standing on the platform careful to stay behind the white line. Four, five years old. If you cross the white line, the train will suck you down when it comes speeding past. I would bend at the waist and peer over the edge and down the tracks, then check the position of my sneaker. Is it over the line? I remember movie posters lining the wall of the enclosed ramp leading from the parking lot to the platform stairs. As I peer down the tracks, Pop holds me from behind so I won’t tip over the edge and down three feet to the tracks below.

We see a pinpoint of white light in the distance down the track. Anticipation shivers through my small body. No sound yet, only the tiny star of light. I look up and smile at Pop’s kind face. He likes being with me, his first grandchild, I can tell. We hold hands, look back, and the light is so much bigger now. It’s crept up on us. I am alarmed and giddy. It feels daring to stand there on the edge with the train hovering nearer and nearer, the single headlight imperceptibly growing larger, and now we hear the clang, clang, clang of the bell, the grinding, low whine of the engine, all of it writing a pattern and rhythm into my brain, and the horn blares. Trains are home and safety, love, and exhilaration.

My grandparents lived in a ranch-style house built in 1959 in New Jersey. The neighbors next door had a small grape arbor, and Pop used to take me through a gate in the farthest back corner of the yard to pick and eat the tiny, purple grapes, lifting me high so I could pull one off the bunch myself. Other days, he would push me in my swing hanging from a branch of the big mimosa with its flamingo pink puffs and ferny leaves. A few feet behind the mimosa, the yard ended with a row of prickly rose bushes guarding a brambled slope up to the train tracks. The two tracks were separated by a station platform. In 1960, when my mother and her parents moved into their brand-new house, there was no station and only one set of tracks, slightly below ground. At that time, only freight trains used the track, and my grandmother planted the rose bushes as a line of defense between the yard and the tracks—a deterrent for hobos.

A gray stone birdbath stood to the right of the mimosa tree. Standing on a pedestal in the middle of the basin was a white statue of St. Francis of Assisi—birds perched on his shoulder, his bare feet gripping the cold stone. I kept a scrub brush between the split trunks of the mimosa and, dipping the brush in the birdbath water, I scrubbed the statue and basin.

Sometimes Pop and I walked downtown. We would go to the five-and-ten and to Carvel for an ice cream cone. We played hide and seek in front of the columns of the Athenian Arms apartment building and then visited his friends at the hair salon and the little grocery market. He knew everyone and loved to joke with people. Other days I’d hang clothes out on the line in the backyard with Mimi.

Most of the time I’d be down in the yard when a train’s horn would blow from afar, echoing in and around the closely packed suburban houses, gas stations, schools and apartment buildings. As the horn sounded again, louder and longer this time as it approached the station, I’d hear the whine of the engine holding steady beneath the clack clack of the metal wheels, gripping the rails. My eyes riveted to the empty track, the train engine would burst into view from behind the trees, and I’d feel its powerful rhythm pounding in my chest as I stood, small in the grass, while the heavy machine rolled past just up the little hill.

We lived in the next town over. No trains. Just school, bikes, neighborhood kids, the Italian ice truck that came rolling up the street, the theme from The Godfather playing over its loudspeaker. At night we watched shows like Knight Rider and Dukes of Hazzard. I had a black plastic Pontiac Firebird with a big, red sticker of the flaming bird on the hood. But I wanted my car to be KITT, so I tried to rip away the sticker. I picked at it with my fingernail. Some of it came off but most stayed on, leaving a patch of white, nubbly paper. I tried to fix it. I took a black marker and colored all over the white, using up all the ink. It looked ok—I could live with it, but I knew the coating of ink was hiding something damaged.

Some nights, when my father was home, he’d take a bunch of beer cans out of the recycle bin and line them up in two rows down the driveway, slightly staggered. Then he’d stomp on them one by one like a giant stomping on skyscrapers, leaving squashed discs the size of tuna cans in his wake. That way, you could fit more beer cans in the bin. Some nights, I couldn’t sleep. I’d lie in bed, arms crossed over my chest like I’d seen dead people do in movies. I was convinced I would die if I went to sleep. I had nightmares and my mother told me I needed an angel. I imagined a perimeter of angels—granite, identical, all around my bed—Michael the Archangel standing tall with a long spear held like a staff. Or sometimes, in that moment when your brain lets go, just before trusting that sleep will catch it, I would imagine being under the cowcatcher of an old train engine.

Pop died when I was 13, five years after Mimi, and the house on the tracks was sold. Trains weren’t the same after that until I moved to Richmond. Short of a trip to Ashland, for a few years the best I could do to be near trains was to go to the Dunkin’ Donuts near the Staples Mill train station. Or gape out the window while driving on 195 to see the slow-moving freight cars heaped with coal, or boxcars with Tropicana oranges painted on the sides. But then we moved into a house near Staples Mill and Mountain Road, and the train whistle once again became a part of everyday life. A bridge between childhood and adulthood. A reminder that I was essentially the same person I was when I was eight and still shared memories and predilections with that young self.

Years later, I return. The old station in New Jersey is mostly untouched by time. I walk up the stairs to the platform and emerge into the still night. I am alone. Looking down into my grandparents’ old backyard I can see the dim outline of St. Francis, still standing despite my absence of years. Where my mother grew up. Where I stood under the mimosa and once saw a circus train.

I walk out from under the thin roof of the platform and pass the old movie poster frames now advertising websites. My destination is the chain link fence that marks the end of the platform. Beyond the fence is the bridge over Locust Street and then the tracks minimizing out of sight. I reach the fence and sit with my back against it. I am at a point directly between the two tracks. I sit still, cross-legged. Just being here makes me feel like two people at once, the little child and the adult. Places inside me have changed, healed, but some have just been patched up, colored over with marker.

Two trains approach now at once, one from each direction, and soon one will be on either side of me. As the whistles grow closer and louder, I stay where I am, fight the urge to move in closer to the building. The engines are louder, and the whistles blow their warnings again. I take it as a sign not to move. I feel the same anticipation I felt when Pop held my hand. I brace myself and here they come. Blasting by, engines roaring, wheels slicing. I want to stretch my arms out wide and feel the whipping wind, but I hold back. I look ok, normal. But I am a colored-in sticker. And that will have to suffice for now. 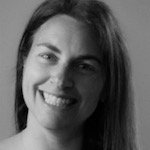 Erin Levens writes and lives in Henrico County, Virginia, with her husband, two kids and brown dog where she continues to indulge in her fascination of large transportation vehicles such as trains, planes, and ships. Her work has appeared on literarymama.com and in Nine Lives: A Life in 10 Minutes Anthology. She has a story forthcoming in Cricket Magazine.