You have purchased the crème de la crème of packages; don’t squander the experience with a panic attack. So bridges make you sweat. So you chew three Xanax every time you board a plane. So you refuse to open your eyes at the top of the Empire State Building, so so so…Think of the hospital beds and the tubes and the shots you will not have. Think of the chemo and the surgeries and the lopped off body parts you’re not trading for a few extra months. You’ve made your decision, so take deep, deliberate breaths of that beautiful oxygen-cocktail pumping through your space-suit and enjoy that drug-induced euphoria for the first (and last) time in your life.

You will orbit Earth twice in roughly four-hours before reentry. To make the most of your final hours, it is recommended that the first orbit be spent enjoying the view. Take it all in. Live those moments you forgot to take in life when you were too busy taking food-selfies, making loan payments, and getting yourself all worked up in that grass-is-always-greener/beat-the-Joneses lather of yours. And for once, let him go—he didn’t destroy your life. Not all of it anyway, so for the love-a-Pete don’t think about that bastard. Instead, relish the sunrise and sunset—the ones you should have enjoyed from your front porch or the top of a mountain—the ones you will soon see from a rare and heavenly vantage. Don’t lose your fucking focus now.

In addition, thanks to the in-suit navigation system, both natural and manmade phenomena such as the Grand Canyon, the Great Wall, the Great Pyramids—all the grands and greats—will be pointed out to you on the first orbit. The second orbit, slightly faster than the first, will be silent. It is at this time the silence will make you wonder if you died already. You’ll try not to list your regrets, but you will. You’ll try not to think of your missed opportunities, your weakest most cowardly moments, but you will. Luckily, at that point, it’s almost over.

After the second sunset, you will hear three beeps. It is advised that at this time you press the SLEEP button as in ninety-seconds you will enter the earth’s atmosphere and experience free-fall and subsequent combustion. Your coursework and orientation have informed you about reentry disintegration. Not that you need reminding, but burn up is inevitable and there are no take-backs. The speed of reentry, approximately seven kilometers per second, will turn you into a human fireball—a shooting star. You can use the SLEEP option at this time in order to miss the fiery pain of your own spectacle.

Oh the curiosity of the living to see the end of others. Oh the instinct of humans to look to others for guidance and reassurance and example. How we hope our journey to the other side isn’t difficult. This is what you’re here for: it’s this very curiosity and wonder that will make for more eyes on you, to be sure, than were on you at your fifth grade piano recital, or your college graduation, or any of your weddings. Be brave for them even if you’re terrified. Hell, go out with a wave. Or a middle finger.

You’ll be placed in an airlock and released at the optimum orbital moment (OOM). You will want to reach for a safety rail and hold on and shout that you’ve changed your mind. But in the end the vacuum of space will win and take your dignity with it. Don’t let that happen. Resist the urge to grasp for more time. Hold your own hand if you must—it’s always been just you, anyway, even when you thought it might not be. Every one of us must go. Not one of us—for all our achievements, for all our fighting and raging and loving and growing—has ever been able to stay. If you can remember that, then the letting go will feel like a beginning. 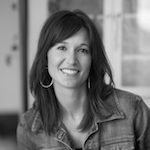 Ashley Hermsmeier holds an MFA in Fiction from Pacific University. Her stories and essays have appeared in Michigan Quarterly Review, phoebe, Flash Fiction Magazine, Gemini, Front Porch, Weber—The Contemporary West, and Cease Cows, among others. She has won three fiction contests and is a Pushcart Prize nominee. Her chapbook Something Like the End is due for release in 2019. She currently teaches English and writing in San Diego.