At some point—I’m not sure when—I came to accept that there are quite a few things that I can’t control. It was not a conscious decision, no epiphany, no wrestling with big ideas. It’s not really ceding control—it’s accepting what has become increasingly obvious, in truth probably somewhere between realizing and accepting. The stock market, terrorism, famine, middle of the night trips to the bathroom, gray hair, the clutter that my wife and kids leave on the kitchen counter where I’m trying to cook, the hair that our dogs shed on the furniture, the weather. Things you can’t control have a magic all their own, the more so when you accept the fact. Things you can control lack magic. Things you think you can control, but can’t, also have a magic all their own but of a very different and not infrequently unpleasant sort.

I’ve just returned from a 10-day trip to Quetico Provincial Park in northwestern Ontario, a place with an absolute magic of its own, a place of lakes and rivers and forests, of 2-billion year old rocks washed by meltwater from the last glaciers that receded just 10 or 12,000 years ago, a place of wolves and bears, moose and deer, beavers and otters, geese and ducks and grouse and loons and eagles, of cedar and birch and poplar and white pine and spruce and pickerel rush and lichens of every description. No signs, no cell phone towers, no toilets, no motors, no instructions. Quetico is a protected, vestigial remnant of a vast wilderness and exists as a named place because of human intervention but within its borders carries on much as it has for the dozen or so millennia since humans first ventured into that wild, endless space where the rivers drain north through the thin soil and over the rocks to James Bay and the sun sets very late or very early depending on the season. It is a truly wondrous place of stunning sunsets and misty sunrises, roaring winds, lapping waves, infinite stars and cold, brittle nights. There, we are visitors, interlopers, able to adapt and accept but not control and Quetico—which, to me, has a sentient presence—is agnostic as to whether we are there or not, whether we come, whether we go.

We were in Quetico in early September, a time when the weather can be unpredictable and when the experience of emerging from the tent in the morning, days in the canoe and on the portages and each evening in a new camp is largely determined by weather. We accepted. We adapted. We were cold. We were wet. We were exhausted. We were amazed. Days of wind kept us pinned to islands in the larger lakes with waves taller than the sides of our canoe rolling onto the rocks. When we dared to venture out, we hugged the shoreline and paddled into the wind and waves. We fished the shallow, protected bays and grew tired of the constant noise from the wind. But in the evening the wind often relented and the sun set brilliantly over the water, the moon rose bright and distant, the geese flew into the marshes late into the night and, in the pre-dawn morning, the lakes were calm and the sun rose quietly through the mist until the wind returned and the clouds raced in.

I have been in Quetico and other wilderness areas in what is called the Canadian Shield many times since my first trip 35 years ago but now, somewhere in late middle age, having accepted—perhaps embraced—those many things that I can’t control, I find that I am more open to and more swallowed up by its magic. It begins to enter my pores as soon as we leave the car behind and by the first night in camp has possessed me. My back and legs ache less, my vision is clearer, I hear and smell things I wouldn’t elsewhere, I taste the faint, slightly sweet hint of iron infused from the rocks into the water then into the flesh of the fish that make up our simple dinners. Just after dusk on our first night, the howls of wolves calling the pack together for the night’s hunt welcomed us back to one of the places in which I feel completely, absolutely at home, at peace. Even as a transient, a visitor, it’s somewhere I belong, somewhere the magic envelops me and, for just a while, makes me part of something bigger than I am and that is unable, unwilling and with no reason to be controlled. 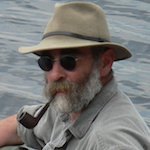 Larry Glass is a scientist by training and a writer, farmer, hunter, fisher and canoeist by choice. He works and writes from a farm in the Potomac Highlands of western Maryland.