“Simply to look on anything, such as a mountain, with the love that penetrates to its essence, is to widen the domain of being in the vastness of non-being. Man has no other reason for his existence.”

I walked warily through Waverly—aware that I felt at ease there. It was in the wake of destruction and the town was slumping under the weight. But I am comfortable with narratives of decay and hauntings.

The other day a friend pointed out a fir outside my window. “It’s dying,” she said. And had I paid attention to the brown and sickly limbs stretching from the lower ranks of branches I might have noticed the same. But I didn’t.

“You’ll have to replace it.” I won’t. I cling to old things long—offer many (too many) second, third chances. I want to believe that life is not exhausted. That beauty can endure.

So, in Waverly, when we came out of the light into the dark, I accepted the must of the antique shop as my mother’s milk. The frayed rope of the freight elevator pulley was a distant kin to the one in Rickett’s Drug Store where I worked as a youth. When we arrived on the second floor, even the rubber werewolf posing by the window didn’t strike me as out of place. I have imagined far more fantastical creatures in my past inhabiting such places.

So we scraped a metal roof in the hot Tidewater sun. We brought water to scour what the metal tools and wire brushes left behind. And from time to time I would look to the bright, bright sky with its high, cotton clouds. My eyes would lower to the water tower, the vacant school with its high, blank windows, the fading brick on every disused chimney, the folk art alligator a half-floor below, the plastic vulture on the roof next door, the small stone gargoyle, P Fleetwood 1904 on the store across the street, ruined homes a block down—victims of the tornado that brought us to town.

The tornado was only marginally more destructive than all the forces conspiring against the place. It just worked faster.

And I just want to watch that I don’t come to love the paths of destruction too much. 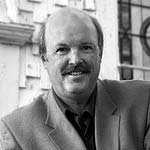 Alex Joyner lives and works on the Eastern Shore of Virginia. With 29 years of experience as a pastor, teacher, and writer living in locales as diverse as Dallas, Texas and York, England, he brings a varied perspective to his work. Formerly a radio disc jockey and news director, Joyner has also spent time coaching basketball in the inner city, leading work teams in Mexico, helping college students discover their vocation, teaching theology and history at Southern Methodist University, and serving congregations in the United Methodist Church. For fun he kayaks the bayside and seaside waters of the Eastern Shore, a place he calls “the edge of the world and the verge of heaven.” He edits the Heartlands blog, a site devoted to exploring rural life and ministry through literature, essays, poetry, and interviews.