My social anxiety as a high schooler was grossly misdiagnosed as maturity by adults. I wasn’t seen as shy, but as respectful. They thought me wise, not scanning for clues of how to best abide by social norms developed by my cooler peers, surely. I was empathetic and sensitive, not a people pleaser devoid of a core self.

“You don’t want to do that,” my mother would say firmly, any time I had an original thought. My actions of course were a direct reflection of the kind of parent she was, and it was important to uphold a certain persona. I was cast in a play I didn’t even know I had auditioned for, and she was the star of the show.

I learned to carry things alone, in bags I might as well have sewn into my very skin. When I went away to college, sick with anxiety and longing for what I knew, I sewed a sand leaden bag into each limb, tethering me to the earth, which I so often thought I might float away from, if left to my own devices. I’d rather have two feet on the ground than float away.

When the campus physician prescribed me sleeping pills to assuage my insomnia freshman year, I took them willingly, if only for one night. A large blue and pink capsule strapped me down to my bed without fastenings, causing my limbs to fall asleep one by one, while my brain continued to whir desperately, like a computer that can’t read a scratched CD. I could barely lift my arms to dial home. Nobody wishes to die by being buried alive.

“Everything is falling asleep but me!” I remembered crying to my mother, on the other end of the telephone. “Just calm down,” she said, a note of panic in her own voice. “Pretend like your limbs are full of sand, and you’re getting heavier, and heavier, until you drift off to sleep.”

I’ve often felt like we are two foreigners, my mother and I, so desperately wanting to find a common tongue but unable to do so. So we gesture, and point, and rely on facial expressions to convey our messaging. But something is always lost, in the way her eyes are devoid of warmth, in the way my voice sounds shrill when I’m not intending it to.

She wasn’t able to breastfeed when I was an infant. She never produced any milk; the stress of the pregnancy got to her, the doctors had said. I had never latched upon her breast, producing a flow of liquid from mother to daughter through the suckling of my puckered lips. I’d been, in fact, whisked away minutes after being born for a rare condition they thought I might not recover from.

By the time they had brought me back to her, perhaps I’d already begun to float away, and no amount of swaddling could weigh me down. I’d started to gather grains of sand that very day, until each bag could be filled, and sewn up to keep me in place. 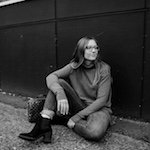 Christine West is a student in the Online Writing Certificate at the University of Iowa. She lives in the Greater Seattle Area with her husband and rescue pup.