Clichés abound this time of year. It’s the one season in which it’s OK to speak of holiday magic or lapse into sappy memories like those that surfaced recently when I ran across a 1956 photo of 4-year-old me on the lap of Santa Claus.

Understand, I’m talking about The Santa Claus—not some run-of-the-mill helper who brings up the rear in an annual Christmas parade. I mean he who sat upon the throne-like chair in Richmond’s Miller & Rhodes for the latter half of the 20th Century.

Whole books have been written about his reign, and anyone who visited him will tell you that, indeed, he was the real deal. For any child among the Santa believers, visiting him was like being ushered into the presence of God.

“He wore a beautiful red suit made of French velvet imported from Lyon. His white collar and cuffs were made of rabbit fur. Hollywood’s Max Factor created his wigs and beard,” says Donna Strother Deekens in her book, Christmas at Miller and Rhoads: Memoirs of a Snow Queen.

Richmond was my mother’s hometown, so we made the pilgrimage to her family home—and Miller & Rhoads—every Thanksgiving. While the prospect of seeing grandmother was attraction enough, these holiday visits, to my mind, were about Santa.

When I held that 1956 photo, it all came rushing back.

I was four: old enough to anticipate, but young enough to be swept away with the kind of excitement a visit to Santa could bring.

My mother and grandmother were excited, too. After weeks of cutting and sewing, pinning and stitching, my grandmother had produced the perfect dress for me: red and green plaid, sweet Peter Pan collar and all. It buttoned up the back, because the front was covered with subtle red smocking—the ideal holiday touch.

This year’s requisite portrait with Santa would be perfect.

On the day of the visit, I was beside myself. I was waiting in my slip and white anklets while Grandmother put the final touches on my dress in the next room. I climbed onto her bed, hopping and jumping, sure my joy would take me through the ceiling and beyond.

She called and, in a final flourish of acrobatics, I leapt over the blanket rail at the foot of her bed and onto the same cherry cedar chest that sits at the foot of my bed today.

When my sock feet hit the slick finish of the chest, they flew in separate directions, and my collarbone took the brunt of the fall. It was broken.

I remember nothing of our trip to the doctor, nothing of pain, and nothing of being swathed in the bandage that covered my body and pinned my arm to my chest.

But I do remember that my mother and grandmother, though clearly concerned about me, were heartbroken: the beautiful dress would not fit over all of the plaster and gauze immobilizing my arm—and my moment with Santa seemed to be gone.

Turns out, we were wrong. My mother came up with some holiday magic I question even today. I could still see Santa; I could still wear the dress; and, I could still have my portrait made on his lap.

All I had to do was wear the dress backwards so it could be unbuttoned to provide room for all that lay beneath.

The next day, my mother implemented her plan, and we were off to Santaland. We stood in line with others, who were either too enamored of Santa, the Snow Queen, and the elf, or too polite to stare.

There was a sea of toys, lights, Christmas decorations, and people everywhere. I could hardly take it in. Slowly, the line moved ahead. The Snow Queen greeted each child and, I learned later, extracted each name before passing it on to Santa through a concealed microphone—high tech stuff for the mid 1950s.

At last, my moment came and the Snow Queen sent me to forth. Gently, Santa helped me onto his lap.

I was mute. All I could do was stare at my mother, who tried her best to extract some Christmas cheer, but it was not to be.

Quietly, I recited my list, and then prepared for my portrait. My mother leaned over the velvet rope and gave me my cue:

“Pull your dress open more,” she whispered, “so we can see your bandages!”

I did (I couldn’t let Santa see me disobey), but the look on my face made it clear: this was not what I wanted at all.

The two things I remembered upon discovering that photo recently were etched more deeply than I knew: My mother’s pleading expression at picture time and the moment, mid-air, I knew my pirouetting leap off the bed had gone, sadly, awry.

Ah, but Santa was there, too, and I took to the Internet to see what I could learn of this and other visits all those years ago.

Turns out, I very likely was sitting on the lap of a Santa who understood full well what it was like to take a flying leap of joy—and that such antics don’t always end well.

That Santa Claus—The Santa Claus—who held me in his arms was former Hollywood stunt man, Bill Strother. In 2010, he was named a charter member in the International Santa Claus Hall of Fame.

They didn’t ask, but you can bet he would’ve gotten my vote, too. 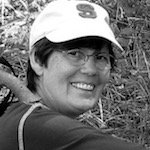 Priscilla Melchior is a career community newspaper journalist who retired to Highland County, Virginia, where she lives with her husband and two border collies.