When I was five years old my stepdad, Bill, found Precious as a stray kitten in the parking lot of his office and brought him/her home. We had him/her fixed at the appropriate time, but later, no one could remember which surgery had been performed. Was the cat spayed or neutered? We decided Precious was a girl—why else would we have named her Precious? And besides, don’t all cats seem inherently female?

She was “precious” indeed. Solid white but for a black patch on top of her head between her ears, so little she slept on Bill’s shoulder. As the years passed I took Precious over as “my” cat, mostly because Sissy—my older sister and self-professed cat lover—rejected her and said she was “gross.”

Precious came to be known as “fat cat” because my mother fed her to obesity (that happened a lot with pets in our house, you know, the “food is love” problem). Her belly hung like an udder and swayed as she walked. Friends asked if she was pregnant.

Once, when she was accidentally let outside by a pet sitter, we came home to find her under a tree with a hole in her side, bird feathers and cat hair strewn around her. She had been attacked by a bird. She was so fat she disrupted the food chain.

Precious embodied all the qualities that make people choose dogs over cats. She was aloof, disinterested in people, a recluse, angry, ungrateful and disloyal. I tried my best to bond with her. Sissy and I dressed her up in doll clothes—what could be cuter? We stopped once she maxed out at a child’s size 6X. The process became exhausting and the dresses just weren’t cute on her anymore. Honestly, she was better suited for biker gear with that attitude. Precious was a little butch.

I desperately wanted Precious in my room, to sleep in my bed and comfort me when I was sad. I wanted her as my cuddly companion. Even more, I wanted Precious to want to be in my room. She never did. It was as though she was repulsed by my neediness. She wouldn’t even stay out of pity. She’d walk straight to the door and paw at it rhythmically and meow—the feline version of banging fists on a door and screaming for help. I would quickly let her out so no one would hear the sound of my cat rejecting me. She just needed to use the litter box, I would tell myself. I never forced her to stay—I wanted her to be happy.

Whenever I caught Precious looking at me, excited for the invitation to engage, I would say something affectionate to her in high-pitched, baby/pet-speak. She would blink slowly and turn her head away just as our eyes met. She didn’t seem to appreciate that I was the only person in the house who was willing to pet her. Everyone else was turned off by her disposition and the cloud of white fur that billowed up after every stroke. She seemed to shed pounds of fur every day. Maybe she was gross.

Even if you could tolerate the debris cloud, keeping track of all her preferences was work: she only liked to be petted on the top of her head, her neck, cheeks and under her chin, and only in the direction of the fur and only for an unpredictable—always brief—amount of time. When you got it right she would purr loudly. If you got it wrong and touched her too far down her body she would turn her head and try to bite you. If you petted her too long she would also try to bite you. Sometimes she would try to bite you for no discernible reason.

Perhaps she was self-conscious about the shedding. I never could touch her for more than a minute before she sauntered off, annoyed. She probably would have left sooner but for the time it took to lift her enormous body.

I always wondered if Precious had a sensory processing disorder, like people who have to cut the tags out of their clothes or it drives them nuts. I saw a news story about treating pets with marijuana derivatives for stress and anxiety. Maybe Precious would have benefited from such a treatment, been a little more agreeable. But what if it gave her the munchies? She already weighed over twenty pounds, and she was not simply “big-boned,” as my mother claimed. She couldn’t afford to sleep any more than she already did, either, which was most of the day. And when she was awake she often had that eyes-half-closed, stoned look.

​As I became a teenager and Precious’s black patch turned to gray, her life improved. I wasn’t around as much to force her to do what she didn’t want to do, namely, interact with humans.

​And then she was gone. My mom explained that she didn’t tell me Precious was sick because she didn’t want to distract me from my school work; I was a sophomore in college at the time. She also told me that when she took Precious to be put down, the vet said she was actually a neutered male. Which explained a lot.

Even though it often seemed like Precious didn’t like me, or my touch, or the sound of my voice and was happier when I was away, still, she was mine. And I missed her.

Many years later I was revisited by Precious—well, her essence—when my two girls were in middle school. When they acted like I could do no right, like I was annoying and my hugs made them recoil—I thought of Precious. When they avoided eye contact and strutted off with a flick of the hair, I wasn’t alarmed. I had seen it before. And I kept on loving them. 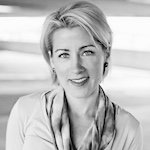 Sarah disappointed her family many years ago by not becoming a doctor of any type. She instead followed her heart and has enjoyed an illustrious career as a stay-at-home mom of three for the past 18 years. Sarah is a humor essayist who lives with her husband and children in Charlottesville, Virginia. Read more of her essays at Sarahdickerson.com.