A few years back, a new neighbor called. “Katie, there’s an old man leaning against my front wall, should I call the police?”

I pulled my window up and leaned out to look, just two houses over. There was Paul, a retired carpenter who’s lived on my street for thirty-five years. (My mom paid him to build me a loft bed when I was 16.)

Paul. How can she not know who Paul is? He spends every day outside, walking a few hundred yards, resting, walking, and smoking, always in pressed white carpenter pants. I want to tell this woman; Paul lived in your basement when you bought your house. He was forced to move so you could renovate, get a new tenant. And thank God, we found him a room in the apartment building in front of the firehouse.

Soon, the couple sold and a lawyer bought. He married and had a little boy and one day on the sidewalk I said, “Do you know you live in an old May Day commune?” I wanted to tell the story about the woman the FBI chased on their roof. He was anxious to get going; not everyone wants to know this history.

Still, on this street, memory is my map.

A new neighbor looks blankly, “You mean where the condo is?”

“Right.” That’s where Mrs. Glass’s house used to be. It was the oldest house on the block. Always full of pokeweed and hollyhocks. The only way she moved away was that she fell and her family came and took her to a home.

So, yes, I walk my street among the departed and disappeared, Paul, the May Day activists and Mrs. Glass. Some days, what’s missing is more vivid than what is. 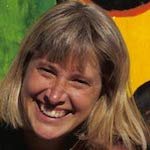 Katie Davis is an independent radio producer and writer who lives in Washington, D.C. Her radio stories have aired on NPR’s All Things Considered, This American Life and Soundprint. Davis has released a three-CD set of her work called Neighborhood Stories and she continues to write about her neighbors.