Artist Jane Skafte has designs on our natural environment.

She illustrates her deep concerns for climate change with research, conscience and talent that subtly reveals devastation from the ground up.

“I am interested in what happens when naturalism and the awesome terror of nature (e.g., tsunamis, erosion, earthquakes) is fused with abstract geometric elements, as a stand-in for human imposed structures and practices (e.g., clear cutting forests, fracking, CO2 emissions),” states Skafte on her website.

“…In an attempt to deal with these overwhelming global events, I work to illustrate the changes that concern me, and to explore what I can do to create the empathy, emotional engagement and cultural understanding needed to motivate a meaningful shift.”

While long a fine art artist and textile designer inspired by nature, Skafte, in 2006, changed her artistic focus to climate change issues after taking a class in which students were invited to look at ways of representing consciousness and involve one’s own symbolism.

“I arrived at the personal symbols of ‘fault’ lines as though I could use them as a disguised autobiography. When I started the series that ultimately became Climate Change, I was looking at diagrams of volcanoes and earthquakes, and considering how they were somewhere between naturalistic and completely abstract (earth and inner strata seen in cross section looking like layer cakes) and I was imitating the scientific diagrams in a symbolic way.

“While I was working on a very abstract drawing (considering the idea of fault line symbols), my daughter was dangerously close to a wildfire where she lives in Colorado and my preoccupation with her safety showed up in the drawing, I started to draw the land in flames. Then I realized that I was more interested in developing drawings that had topical content.”

A native of Chicago, Skafte earned her BFA from the School of the Art Institute of Chicago and an MFA in Fibers and MA in Textile Design from Syracuse University. Her “first career” as a textile designer led her to Lenox China in New Jersey and creating floral designs for tableware. She later produced museum reproductions for the Smithsonian, the Virginia Museum of Fine Arts and, product designs based on archeological finds at Monticello. For over 15 years, she taught 2-D design, painting and drawing at schools and universities including James Madison University and Piedmont Virginia and Blue Ridge Community Colleges. Skafte and her artist husband, Peter Allen, moved to Virginia in 2001. They live on a farm in Kent’s Store.

While helping her husband create slide lectures about earth grids and geomancy, she was influenced by sacred geometry which “bled into my own work,” says Skafte. “The study of sacred geometry has its roots in the study of mathematical principles and relationships found in nature from the micro to the macro level. These and other correspondences are sometimes interpreted in terms of sacred geometry.” Her abstract drawings eventually wended their way to climate change subjects.

“Grid is about a damaged earth. It started with some idea of planes you could see simultaneously on top and under each other. Three-dimensional drawings have always been a fascination of mine. I’d just start drawing and let things overlap. Then after I’d had got an interesting bunch of lines and shapes and areas, I started adding color to it. That’s where my textile sensibility comes in.”

Skafte acknowledges a nod to Klee, Picasso and Sonia Delauney, especially the latter for her colorful geometric textile designs.

“The drawings evolve. As I complete an area, then I figure out what else I need to include to tell the story. On the computer I download millions of pictures. I’m always researching from wild fires to under water scenes. I also incorporate mythological symbols—Hindu and Buddhist cosmology, and Judeo-Christian creation myths.”

Unlike the primary, vibrant watercolor palette of her abstracts, Skafte uses colored pencils for her subdued, elegant and understated Climate Change series. “The use of colored pencil is pretty and soft…you’re not seeing blood and guts,” she notes. “They’re easy to look at. Then I’ve kind of roped you in and make you pay attention to things that are really horrendous and difficult.”

In the early study, Climate Change, Skafte, using weather map motifs and geologic perspectives, depicts wild fires on one side of the country and floods on the opposite side. A city and forest both suffer ruination. ”They are related although they would seem to have nothing to do with each other,” she says.

“I started Thwaites Glacier Antarctica on the right side and worked my way across. I thought I needed red or something hot to illustrate the melting glacier. The idea came up of a phoenix and I put the bird in. Although the destruction of the global warming is there, the phoenix represents a rebirth. I realized it was actually a hopeful image. That didn’t occur to me until after I’d finished the piece.”

Oil Spill, above, references an oil spill, mangroves and pelicans that were covered in oil during the BP Deepwater Horizon disaster in the Gulf of Mexico.

Unraveling is about the rapidly disappearing ice of the Arctic Ocean region. Above the reindeer is a microscopic image of anthrax. “Anthrax had been sequestered in some of the frozen permafrost for who knows how many thousands of years. When melting, the anthrax was still viable and wiped out a significant number of reindeer,” says Skafte.

The birds pictured flying off to the left are murre, a species that is endangered to the brink of extinction. Also some of the dead murre are drawn on the lower left. These die-offs are a result of warmer water that has reduced the numbers of fish that murres depend upon.

In Mudslide, Skafte employs the Hindu mythological symbol of the elephant holding up the world, mud slides overcoming him with their weight. “I was looking at photographs of clear-cut logging in Northern California and the Pacific Northwest; both clear cutting and wildfires contribute to deadly mudslides. It’s a mash-up of different geologic disasters.”

In Ghost Forest, the fragile earth is balanced on the back of the sea turtle, another ancient myth. This piece, says Skafte, shows the Neskowan Ghost Forest in Oregon. The forest probably went underwater as the result of a tsunami or an earthquake, but the dates are unknown.

There’s a similar situation on the coast of North Carolina, where wetlands were claimed for agriculture, but the rising sea and storm surges are making this land unsuitable because of salt water. It’s becoming a ghost forest, she says.

Finally, Carbon Footprint was sparked by California wildfires a few years ago. Here the temperature and tones heat up Skafte’s ever growing climate change frustrations. The lower plane renders the harnessing of electricity and subsequent factory fallout from its carbon footprint. The rising planes reach Biblical heights.

The illustration of strip mining and the refinery, she says, represent all the ways the whole ecosystem has been destroyed to extract  fossil fuels to produce electricity. On the left, are burning houses.

“My granddaughter was sleeping over and I was checking on her,” Skafte says. “I started drawing her foot because it was so cute. I was thinking of the play on words of foot as a footprint and how I could incorporate carbon footprint into a drawing. I thought that I would be more successful if I found some reference for my work in progress, and I came across a print of Michelangelo’s Sistine Chapel fresco of the verse “let there be light.”

“It seemed a way of contrasting the natural light, solar power, versus our power plants; the imbalance in C02 from constant burning of fossil fuels has the nasty effect of contributing to unmanageable weather and wild fires. It pictures how in our pursuit of power and reliance on fossil fuels we have destroyed our home.

“Gradually the angel, or Lucifer, and God got in there too. I didn’t set out to make this about the Judeo-Christian version of hell. It seems that happened in spite of me.” Skafte laughs.

While not necessarily seeing climate change in apocalyptic terms, she allows that “a meaningful shift” in consciousness is now being raised among younger generations with hope that they will lead the fight forward. “The kids are staging walkouts and strikes. So the hope is that the generations who survive are able to create a very different world.”

Optimistically, Skafte also finds refuge surrounded by nature’s constant bounty and renewal. She’s now working towards a 2020 exhibition that will combine her abstracts with nature studies including endangered insects.

“I’m looking at patterns of butterfly wings and other amazing creatures that will start to resonate more with these works. There’s always a pattern design,” she says. “You can’t take the textile designer out of me.

“I love looking at my garden and the iridescent butterflies and being inspired by them. I want to show their beauty. So it’s also an appreciation.” 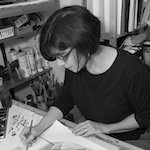 One thought on “Jane Skafte: Cautions of Climate Change”