I’ve been interested in photography since I was twelve years old. I grew up in North Miami Beach in a predominantly immigrant neighborhood. In middle school, my mother sent me about an hour away to a school in South Miami. She wanted me to see and experience things that were different than what was in my immediate environment. The school happened to have an arts magnet program that included photography.

At the time, I didn’t have a real camera. My mother bought me disposable ones from the pharmacy. Whenever I had assignments and would run out of film, I had to wait until she could buy me another one. Eventually my photography teacher gave me my first real camera. It was a 35mm Leica.

Today I am inspired by my mentor CW Griffin, a Miami photographer who taught at the University of Miami and is now retired from being a staff photographer at The Miami Herald. CW was the first African American to be named Military Photographer of the Year worldwide. His work has appeared in The National Geographic, Smithsonian and Time, as well as in exhibits at the Brooklyn Museum, Corcoran Gallery of Art and the Historical Museum of Miami.

CW uses photography to tell untold stories. There’s a level of thoughtfulness and harmony in his photographs that seems to always bring out the beauty in unconventional, and sometimes hidden, spaces. As my mentor, CW reminds me that photography is as much about chronicling life as it is about creating art and/or making a statement.

I also admire Dawoud Bey, known for his street photography portraits of teens in their communities.

My favorite photographer of all time is Gordon Parks. His images are striking and thought provoking, but I really love how Parks uses a photograph to tell a multi-layered story. It’s as if he’s inviting us to peel off each layer of the subject and its environment. His stories, like mine, are of people and places that are underrepresented, nuanced, and multi-faceted.

After serving in the US Army at Fort Rucker, Alabama from 2009 to 2012, I grew a bit restless for new places. Haiti seemed like the best next step. I imagined it to be the kind of place that is mesmerizing, beautiful, mysterious and heart breaking. I was never interested in the “poorest country in the western hemisphere” narrative. I lived in rural Haiti for seven years, from 2012 to 2019. I soon began to document intimate parts of everyday living, I seek to capture the raw beauty of black and brown people as they balance their lives on the fine line of resilience and struggle.

Some days, my photo stories were about love. Other days, they were about struggle. But every day, it was about the beauty around me. I wanted to share the images —whether it was babies with wide, toothless grins or Rara bands dancing merrily through the street.

Michael, above, and the Baroness, left, both identify as two-spirited, both male and female.

Spirituality is the pillar of Haitian communities. It sets social and communal order.

For example, the Haitian calendar is closely aligned with that of the Catholic Church. Certain dates for particular saints within the Catholic pantheon are used to represent Haitian and African spirits that were synchronized during slavery to hide their original religion. I had the opportunity to document private Vodou ceremonies in remote parts of the country and Rara processions where practitioners took to the streets in celebration of their ancestors and ‘Iwas.’ (Iwas is the collective name for ancestral spirits and African Gods. They are venerated year round and are celebrated on specific dates throughout the year).

Experiencing life in Haiti and developing countries became my catalyst to document marginalized people throughout the world. Later, I traveled with my camera to Indonesia, Cambodia, Malaysia, Thailand, and the Dominican Republic as well as throughout the United States.

I try to capture the essence of my subjects, not necessarily peoples’ physical features.

My default is black and white photography. It’s what I’ve always loved. I feel that black and white captures and highlights human emotion in a timeless manner. I use color to emphasize a distinction between the subject and his setting in a bold way.

Currently, I am working on the Brujx Project, which focuses on the journey to self of brujxs (the gender-neutral term for spirit workers practicing Afro-Caribbean spiritual systems) in South Florida and the Caribbean.

As they navigate within, they adapt the spiritual systems of their ancestors. Through this project, I am exploring identity, sex, and spirit.

Charlot’s photographs are now part of a group exhibit at the Haitian Embassy in Washington, DC. through December 2019. Ambassador Hervé H. Denis says of the artists’ exhibition: “…on the walls of the Embassy are more than images, what you are witnessing tonight is Haiti through the eyes of the Diaspora…It is their imagination on a canvas. It is in essence their way of reintroducing all of us to the Haiti they know. The Diaspora has always held a special place in my heart and in my work. I believe they are one of Haiti’s greatest resources and assets. Their understanding of both republics and the global community positions them to make an impact in our homeland and outside its borders. What I find most fascinating about them is their passion and drive to contribute and give back. I created this initiative to offer a platform through which they can channel that desire and passion, and turn it into action.” 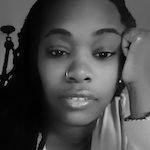 When not taking pictures, Vanessa Charlot teaches and speaks about roots, culture, identity and art at The Vodou Holistic Center in Pembroke Park, Florida. She lives in Miami. Click here to see more of Charlot’s work.