Corsets of snow belly-bust traffic in Chicago,
mercifully blurring the blocky derangements
of Mies van der Rohe’s window arrangements.
You look from Floor 23 down at Michigan Avenue,
wax maudlin for a platter of deep-fried kudzu.
We are not meant for such a graceless place,
its buildings faceless, its rapacious bland spaces,
its huge inhabitants, its malignant tenements,
its grim aborted experiments with Southside facelifts.
We were invented for the Redneck Riviera,
the eternal Virginia Reel with Miz Scarlett O’Hara
ravishing her radish from the ruined ramparts of Tara.
The fantasy of Atticus Finch has leeched into our marrow.
The world is too wide for us, and we are far too narrow.
You curse at the grizzled face of an October blizzard,
rooting furtively in your desk drawer for your scissors
as though you could cut out this gray lake-effect misery.
You remember a Gulf summer storm raining mystery
in its suddenness and intensity, a Pas Christian secret story.
Just like your Dad, a sharecropper’s son, thrust his fist
through the sky, through Mrs. O’Hara’s portiers, trusting
against evidence that there are no ghouls in Clark Gable’s mist,
and reached past cotton fields, reached North, wrist-slitting,

insisting to Dixie, “Lord, there’s something better than this.” 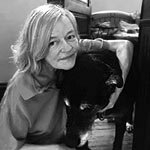 Pamela Sumners is a constitutional and civil rights lawyer from Alabama. Her first publication was for her third-place entry in Streetlight in its 2017 contest. In 2018 and 2019, her work has been published or recognized by thirty journals or publishing houses in the US, UK, Scotland, Ireland, and Singapore. She was selected for inclusion in 2018’s 64 Best Poets, and she has been nominated for 2019’s 50 Best Poets. She was a 2018 Pushcart nominee. She now lives in St. Louis with her family, which includes three rescue dogs.