I remember the moment I knew my grandmother’s mind was slipping away.

My cousin leaned in to give her a kiss and say goodnight. “Goodnight, Dahh-ling,” she replied as only she could, and then, to no one in particular, “Who was that?” Granted, the woman had nine kids and eighteen grandchildren, and she may have had a rum punch or two, but still, it struck me.

Two years later, a few days before Christmas, I sat with her on a bench under a blanket and a blue winter sky in the field behind the old Virginia farmhouse where she and my grandfather had raised my mom and my aunts and uncles. In the field where she had seen six decades of weddings and softball games and egg tosses and fireworks and sledding and dogs and tree house construction and party tents and garden clubs and scraped knees and hurt feelings and broken hearts and touch football and thunderstorms and sunsets and jubilation and horseshit both real and metaphorical. I sat with her in the field where she raised the one crop that mattered to her: her family. The afternoon sun reflected off the water of the Rappahannock down below. We stared through the wide corridor of unkempt boxwood, just past the holly trees out into the brown patch of winter grass where her children and their children and their children were gathered around a fire roasting oysters, melting butter, eating, sharing stories, laughs, beers, hugs, memories. They came there as they did every year from around Virginia, down from New York, up from Texas and the Bahamas, and back from California.

“Tom,” she asked, “where did all these people come from?”

I squeezed her hand.

Reality is a fragile thing. She taught me that, sitting there on that bench. It’s not written in stone or on parchment or saved in the cloud. It’s a handshake deal. A wink and nod. Reality is a nonbinding, subconscious contract defined and redefined with every blink of our eyes, every beat of our heart, every breath. And like every contract, it only works if more than one party holds up their end of the deal.

And, now, I remember the moment I knew my country’s mind was slipping away. You probably do too, though your moment may be different than mine.

For you maybe it stretches back to rumors of Joe Kennedy buying votes for his son. Or the grassy knoll. Or Martin or Robert getting gunned down. Or Vietnam. Or Watergate. Or Jimmy Carter’s Playboy interview. Or Iran-Contra. Or “Read my lips.” Or Rodney King. Or “I did not have sexual relations with that woman.” Or hanging chads. Or 9/11. Or WMD. Or the Patriot Act. Or Halliburton. Or too big to fail. Or TARP. Or the Tea Party. Or Occupy Wall Street. Or the BP Oil Spill. Or “You lie!” at the State Of The Union. Or Citizens United. Or the ACA. Or drones. Or Trayvon Martin. Or Merrick Garland. Or deleted emails. Or “blood coming out of her…wherever.”

Or maybe it was none of those things, or all of them, but seems safe to say, you’ve got that moment in your mind. Your flicker of sad realization for what you thought was reality lost.

To me, this man is the embodiment of our collective dementia. To you, in some way I can’t comprehend, he may be the cure. Sadly, it seems the best we can do is stare with simmering frustration at each other wondering, “Who are you?”

On our trip back to Virginia for Christmas this past year, my wife and I took our kids to our nation’s capital. We stood at Abe’s feet. We huddled next to the bronze soldiers in Korea. We touched the words of the Reverend King. Felt the waters of WWII splash our cheeks. Leaned-up against the sky scraping Washington Monument. We rubbed the braille on Alabama’s statue of a young Helen Keller. We stood under the rotunda of the Capitol. Looked up at the deified images of our founders and looked around at the larger-than-life depictions of the moments of our curated history.

There are more imperfections in that town than the mismatched quarry stones in the Washington Monument. Not all of our history should be celebrated, but these imperfect monuments built to imperfect people are the best genetic map of where we come from. It felt good to remember that. To feel it. To recollect that there are different interpretations of history. Even different experiences within reality. There was comfort to look at where we came from and realize, we were never great, because we have always been a work in progress. Because greatness is a journey, not an end. Greatness is striving. And our shared reality, our handshake deal, is to not give up on that dream. That is why the task of setting out to be great again is a search for a memory that doesn’t exist. A blurry photograph in an old shoe box in a dusty corner of our imagination. It can’t happen again, because it never was. Greatness doesn’t pose for history. Greatness moves forward, not back.

On Christmas, nurses brought my grandmother from the assisted living facility to her home, to her family. We were excited. It was a moment to be with her, in that house, on that day. But, she slept through the entire visit. Never stirred. Never opened her eyes. Oh, but had she awoken, she would’ve seen her children singing and dancing to the songs of the youth she nurtured. She would have seen them trying, hoping, praying to conjure one more dose of shared reality. That beautiful, old woman would have seen complete strangers doing their damnedest to hold up their end of the deal.

We’re under this blanket together, America. Until further notice, there’s no alternative. It’s just a fact.

So, please. I love you. Give me your hand.

I want to squeeze the shit out of it. 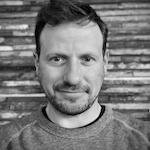 One thought on “What We Forget by Tom Coates”