Have you heard what dying people are said to regret? Working too much. Spending too little time with family and friends. Not speaking up when someone is out of line. Postponing joy. These are real regrets. I know this.

In late August four summers ago, I was preparing to die. I was in an ICU where the force of high-flow oxygen reminded me of standing on a cliff in Ireland being firehosed by wind that travels unimpeded across the Atlantic. Pulmonary fibrosis triggered by mold secretly lurking behind the drywall of our Brooklyn brownstone caused my lungs to irreversibly scar, shrink, stiffen and block the transfer of oxygen to my blood. A transplant was my only hope, but I had waited in the hospital for two weeks as I rapidly deteriorated. Doctors said in a few days I would be too sick to survive a transplant. I should gather family for goodbyes. Then, on Aug. 27, 2015, a lung transplant saved my life. Only a single lung became available, but I was not picky. August 27 is more meaningful to me than my birthday.

Thanks to the generous family of my donor Segundo, an emigrant from Ecuador, I am alive and acting to head off such regrets. Segundo’s framed photo is on my bureau and I thank him daily.

Life is precious. I strive to be more in the moment. I spend more time with family and friends. I try to be kinder and more generous. It was long against my nature, but I have let grudges go. Adventures, not material things, are my focus. With the right mindset, a good book and a large latte, an afternoon walk two blocks from my Manhattan home to Union Square is an adventure.

Both of my daughters now have families of their own. Last July, Eva and Duncan presented the beautiful Alexandra. Maggie, our first grand baby, was born to Lucy and Jon a month before my transplant. The worst part of facing death was thinking I would never know Maggie. “Nana” was one of the first two dozen words of Robert, her twenty-one-month-old brother.

In the last four years, I made my first visit to Paris, attended the Pulitzer Prize luncheon, wore a fascinator to a cousin’s wedding in England, saw Bruce Springsteen, Hamilton and much else on Broadway, and held on to a part-time editing job at The New York Times. I visited a brother I hadn’t seen in eleven years and celebrated another brother’s more than two years of sobriety.

The hurdles and tests I passed before transplant included a doctor who looked into my eyes and, with family and friends surrounding me in support, made me acknowledge that the average lifespan of a lung transplant patient my age is 4½ years. Streetlight accepted this essay on the day I passed 4½ years. I don’t dwell on unpleasant statistics, but I always buy travel insurance. Last year, I lost two friends who received new lungs after me. That’s how averages work.

Transplant life is complicated. Drugs keep me alive, but they make me susceptible to infections, liver and kidney damage, bone loss, foggy thinking, diabetes, cancer and needing more sleep than anyone in the family except newborns. I wear masks in the subway, on airplanes and in crowds. I have little bottles of hand cleaner for every purse and coat pocket. Numbers change but now there are sixteen pills in the morning and eight at night. Alcohol is limited to a half glass of wine a year. I take mine in sips. Stage 2 cancer that pathologists found hiding in my removed left lung complicates my case. A PET scan prior to transplant missed the cancer in my fibrosis-filled lungs. If the cancer had been found earlier, I would have been disqualified for a transplant: that makes my case a fortunate rarity, but with little guidance available on treatment or survival.

Since transplant, I have been admitted to the hospital at least eight times. People ask if I’ll ever move from New York. I can’t imagine leaving my doctors at NewYork-Presbyterian/Columbia.

My YMCA recognized my devotion to exercise through repeated recoveries by asking me to be on a poster about the benefits of membership. I declined, shy about having my photo in gym bathrooms around the city. Still, it was good at age sixty-seven to receive my first-ever acknowledgement for athleticism.

Are you signed up to be an organ donor? Do it. It truly is the gift of life and it’s in your power to make the last thing you do supremely gracious. 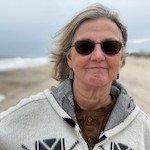 Susan Kille grew up in a small New Jersey beach town that was founded as a Christian retreat. Almost forty-two years ago, she married a guy who grew up in a small North Carolina beach town. They raised two daughters in Brooklyn and then downsized to Manhattan. Her first job was packing saltwater taffy, but has been paid to employ words since she was in high school and took over a fishing column for the Ocean City Sentinel-Ledger, the same paper where Gay Talese got his start.

2 thoughts on “Learning to Limit Deathbed Regrets by Susan Kille”