It was raining hard and Eunice’s husband, Oliver, insisted on getting the car from the lot and bringing it around to the front of Brucie’s, where they were regulars. You could get supper for two, dessert included, for twenty-eight bucks plus tip. Marriages had rituals.

After he left, the sky, at 7:00 p.m., darkened like midnight, and the rain splashed down like a carwash. She waited inside, peering out the window, watching for their cosmic blue metallic Honda that her husband would keep for five more years, at least, no matter what new safety features would be developed or how fuel-efficient a new car would be. “Drive it into the ground” was his motto.

Soon, his car was at the curb, waiting. Pulling the collar of her trench coat up over her head in a makeshift hood, she made a run for it, opened the door, and got in.

The driver was not her husband. He was a stranger. Too flustered to look at his face, she saw his large hands on the steering wheel, his wedding band, the Mercedes-Benz logo on the wheel’s center. Her face burned, which for once wasn’t from a hot flash. She was shocked out of her stupor by fists banging on the passenger window.

“What the hell are you doing in there with my husband?” a blonde woman screamed.

With the raindrops chasing each other down the window and the breath steam, only the woman’s mouth, lipsticked scarlet, was clear—open wide, a set of sparkling veneers, a wagging tongue, a glimpse of tonsils like the clown poster over the funhouse that used to terrify Eunice in childhood. She’s just upset, Eunice told herself, just as I would be if I found her next to my husband. Quaking, Eunice reached for the door handle, ready to get out and apologize for her error, when the man tore away from the curb, leaving his wife shrieking on the sidewalk, and Eunice beside him.

“My husband just went to get our car,” Eunice explained to the man who wasn’t her husband. “It’s dark blue like yours. He’ll be back any moment. He’ll be worried,” but the man who wasn’t her husband kept driving. The windshield wipers, she noticed, actually worked, clearing perfect arcs, the defroster doing its job without blowing heat and making her hot flashes into sweat pools. If only her husband would buy a car like this, which they could afford, but he’d never spring for.

“I have to get back,” she said, finally, a tremor creeping into her voice. She looked at this stranger’s face, which she could only see in profile. He had a large jaw and eyes, a nose that was prominent like her husband’s, but with a perfectly straight bridge. His gray hair was in very defined curls, like an Etruscan sculpture. Her own husband was bald as a headlight and his jawline getting more undefined each year, but still good-looking, not just to her. She often saw other women giving him the eye, then looking away quickly when she caught them.

At the light, she tried to open the Mercedes’s door. It was locked. She was locked inside and didn’t have her cell phone. Whenever she was with her husband, she didn’t carry it, nor her credit cards, or any cash, not even her house keys, which she could have used to gouge out the eyes of this stranger if he tried something funny. But wasn’t he already doing that? Absconding with her?

“I don’t know why I do this,” she babbled, twisting the strap of her pocketbook. “When I’m with my husband, I let myself be totally dependent on him. You’d never know that I have my own business, my own checking account, credit card. In fact, it was through my earnings that he was able to start his business. And he was hardly home when I raised the kids.”

Out of the corner of her eye, she could see he was as impassive as Oliver when she complained. Her words might as well be vapor.

“Where are you taking me?” she demanded.

The rain was slowing down, but not this stranger. Silently, he kept going on the boulevard, passing haloed streetlights, empty storefronts, and those gray medical and office buildings that rose like fuck-you’s to the verdant hills behind them, tiered with trees that would be bright with autumn if it were daytime.

She wanted to scream, but he put on the sound system, which was so rich that the swirling music, the horns like a hunt, vibrated through her, around her, behind her. Wagner? The radio in Oliver’s car was staticky, and whatever was on, even NPR, Oliver hummed a tuneless melody, something he wasn’t conscious of, no matter how often she pointed it out. Now she was being transported by this music, this man.

He drove to the next town and pulled into the parking lot of a large, tony white steak house with green shutters and green flower boxes on the windows and a regal green awning. The valet, a high school boy in a yellow slicker, came toward them. Now was her chance. She could tell this boy she was being kidnapped. “Call the cops,” she would say. But when the lock unclicked and the valet opened the door, all she could think of was that this was a place she’d always been dying to go to, but her husband said it wasn’t worth the money.

Inside, a red carpet was unfurled over the parquet floor. The man who wasn’t her husband helped her out of her coat, which had managed to only be slightly damp, and gave it to the coat check girl. The receptionist showed them to a corner table. The walls were the color of Dijon mustard and the tables round, with vases of fresh roses and candlelight. She didn’t tell the man who wasn’t her husband that she already had a meal at Brucie’s.

She heard this man’s deep, whispery voice for the first time when he ordered a bottle of Merlot. It might have been considered rude to not ask her what she preferred, but she was awed. Her husband would never order more than a glass of wine, said they could open a bottle when they got home if they wanted more. When she saw this man swirl his wine and sniff it at the first pour, she bet his parents weren’t refugees like her and her husband’s. This man, swirling and sniffing his first pour, had never lived a hardscrabble life, one that would make his children frugal and guilty no matter how much money they made. She felt more ice than heat toward this man, but with him, the oysters on a half shell slid down her throat like absolution. He ordered a filet mignon for two, but she began to think of her Oliver, who had gone to get the car without even an umbrella so she would be dry. He would be waiting for her now, at Brucie’s corner. Maybe the stranger’s wife told him what happened. Or maybe the wife took a taxi, and he was all alone there, waiting. He wouldn’t leave without her.

“I have to get back,” she said, standing so abruptly that the chair clattered to the floor behind her. If she had been dreaming, which she half expected she was, this would have woken her up.

He got up too. He left two hundred-dollar bills on the table and retrieved their coats. The valet was so quick that he might have been sitting out the rain in the Mercedes.

“Why did you leave your wife on the curb?” she asked in a huff, as if she hadn’t willingly just had oysters with him.

“When you’ve been married for eons,” he said, “you develop a rap sheet on your spouse. You know every quirk, every mistake made, both large and small, what’s in the DNA and what has been learned from a parent, which you never stop pointing out. Who can live under this scrutiny, this caseload? It’s like The Picture of Dorian Gray, except your sins ruin your spouse instead of you.”

All the small things she’d held against Oliver—his tuneless humming—da dah dum dah da—his money worries, which only magnified hers, his missing their daughter’s and son’s plays and soccer games so he could double up on work to pay for their college. Always living for the future. Shuddering, she pictured this man’s wife, her face like the one on the sign of the funhouse, teeth that could bite into your jugular. “You must be a hellion in your marriage,” she said.

She expected him to confess infidelities or even smackdowns, but he just nodded.

“Hey, we’re not headed back to Brucie’s,” she said, yanking on the door handle, which was locked again. He went south instead of north.

He kept driving to a place where there were no more streetlights. And then he drove down a long, steep ramp and kept going.

She couldn’t get out. Even her seat belt wouldn’t unbuckle. She knew her husband would wait at Brucie’s for her. If he finally gave up, he would somehow find his way to the mouth of hell and not leave without her. She grabbed for the wheel, twisted it. Instead of a U-turn, the Mercedes veered into the concrete wall with a bang like a gunshot. Everything went dark. She felt her soul slipping from her body like an outgoing tide. Faintly, softly, as if from another world, Eunice heard Oliver’s off-key humming. 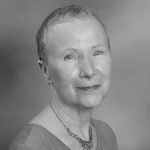 Rochelle Jewel Shapiro is the author of Miriam the Medium (Simon & Schuster). Her second novel, Kaylee’s Ghost, was an Indie finalist. She’s published essays in NYT (Lives), Empty Mirror, Entropy, and more. Her short stories and poetry have appeared in Moment, the Iowa Review, Permafrost, The MacGuffin, and other publications. She currently teaches writing at UCLA Extension. Follow her at https://rochellejshapiro.com and @rjshapiro.

One thought on “Midnight by Rochelle Jewel Shapiro”