Daniel and I had done a lot of preparation for labor, I thought, but I never considered that it would start during the night.

I had pictured it many times and it was exclusively a daytime event. In fact, it started in the morning, like most civilized activities. Like a workday.

But that wasn’t how it happened. I spent the night of October 15th-16th intermittently awake with contractions. I didn’t wake Daniel up to tell him the news, though, because I’d read a passage in a birthing book about some Amish woman who didn’t tell her husband she was going into labor, she just stayed up through the night building a rocking chair and then took a brief time out to give birth. I thought that sounded no-nonsense. The next day (Daniel’s birthday as it happens), the contractions weren’t getting stronger or closer together, so I figured labor wouldn’t begin until the next morning, or perhaps the morning after that.

But after we finished Daniel’s birthday dinner and started in on birthday dessert, I could tell things were changing. My sister Jamie and her husband Hans were hanging with us, eating and playing cards, and I started having to take breaks from the card game to weather the span of each contraction. I’d lean against the kitchen table, eyes on the floor, and take long deep breaths until it finished. I know Jamie and Hans had never played a card game quite like this, and neither had I.

When they left around 10 p.m., Daniel and I were on our own, and it was apparent we’d be facing a long night together. As a rule, I don’t really like the nighttime. Everything seems harder, scarier, more lonesome. Mornings give me an optimistic kick. Nighttimes feel like a touch of madness in a pool of sadness.

So the timing had me disappointed and daunted from the get-go. We knew the Midwife Center didn’t want to see us until my contractions were four minutes apart, so we had many hours at home ahead of us.

That night had some of the qualities of a bad mushroom trip. Time’s passage incomprehensible. Terrifyingly slow, huge chunks unaccounted for. The nausea hit early and stuck around until the end. I couldn’t retain food or liquid. I paced back and forth for awhile, knowing I was wearing myself out, but lulled by the trance that resulted. Although Daniel and I had practiced a number of pain coping techniques, the only one I found reliable comfort in was called “toning”: emitting a long, low-pitched bellow for the duration of the contraction. Covering my pain with my voice, squeezing it out of my throat.

I’m very proud of the hours that Daniel and I spent together on the night of October 16th-17th because we had only each other and we’d never done this before. It was frightening and boring and exhausting and we did it. Our poor dog Manny. He must’ve thought we were haunted. He barely slept that night either, checking in on us anxiously, slinking his body underneath my knees, looking for some normalcy.

The day dawned unceremoniously, thick with rain and gray. The Midwife Center asked us to come in and we piled hopefully into the car. It seemed like a change of scenery would do us good, and maybe the professionals would know what to do.

They told me I was dehydrated and sleep-deprived. They gave me a mild opioid, nubain, that was supposed to help me sleep, but it didn’t dull the pain enough. After they administered the medication and left the room, Daniel climbed into bed with me and began to cry. He said it was hard to watch me struggle for so long. I knew it must be, but I couldn’t think of any way to do it differently.

All the professionals that I dealt with that morning were kind and practical. They’d start to ask me a question or to take my blood pressure and I’d be suddenly sidelined with a contraction and they’d say, “No problem, I’ll wait until your contraction is done” and I’d think wildly, “Why in God’s name would anyone want to do this kind of work, when so much of your job is waiting and watching women writhe in pain?”

I’d already been entertaining the idea of an epidural, but I felt unequivocal when the midwife told me I was only one to two centimeters dilated. The news seemed impossible; she seemed unsurprised. Our doula, Cortney, and Daniel reminded me of our birth plan: that if I said I wanted an epidural, we’d try a new pain coping strategy for ten minutes to see if it helped. Getting an epidural meant going to the hospital and I really hate hospitals. I told them flat out that I wanted an epidural and Cortney suggested that I try a series of movements to adjust the baby’s position and encourage his movement through my body. I halfheartedly tried, then announced that I wanted an epidural for real.

I’m also proud of the time we spent at Magee before I received the epidural, especially the twenty or thirty minutes I spent in the waiting room moaning loudly in front of a dozen strangers, uniquely untroubled by the impression I was making.

An epidural feels weird. I don’t remember the shot itself but I do remember the starry feeling in my legs and feet followed by the unrequited desire to move them so I could roll over. I experienced the insertion of a catheter, but I also really didn’t, since I was thoroughly numb. I experienced many, many additional contractions, but I also really didn’t, since I couldn’t feel half my body. I wanted to sleep but was attached to too many machines to get comfortable. I lay dully for hours in a no man’s land. Cortney opened her laptop and I felt sorry for having done such extensive birthing prep with her, only to choose a route where so few of our plans applied.

Somewhere around 11 p.m., the nurses and midwives announced that I was fully dilated, and I said, “Okay,” the way you’d say “okay” to a bank teller who asked for your ID. They told me it was time to push and the whole thing felt so anticlimactic that I almost cried, except that my mind felt as numb as my body, so I just thought again, “Okay.”

There is some skill involved in pushing amidst an epidural because you have to fight to identify the proper muscles. At first, I could tell I was mainly just scrunching my face and holding my breath like a soap opera actress pretending to have a baby. But eventually I ferreted out my pelvic floor and started moving my baby forward. I did not poop. The one advantage of so many hours of nausea, perhaps. I was empty.

When Kasper landed on my stomach, Daniel cried again and I felt a few miles outside my body, aware only that this experience wasn’t nearly as emotional as I’d been expecting. I felt like apologizing to everyone, to myself. I felt ashamed, but not debilitating so. I took comfort in the fact that I could tell the truth about this birth, my first birth, and it would be valid and people would still love me.

Shortly after Kasper was born, the pediatrician took him aside and began an assessment. It felt inordinately long. Eventually, the pediatrician explained to the rest of us that he was concerned about the baby’s respiratory system. Kasper came out crying—a good sign—but his breathing had a wheezy, hiccuppy quality that suggested fluid in his lungs or worse, infection.

They took him to the NICU, where he stayed for almost three days. Daniel and I had a hard time there. As far as we could tell, Kasper did not, which is a blessing. I’ve struggled with how to describe our experience with the NICU. I think one word that applies is “traumatic,” in that Daniel and I both felt scared and hurt, like we were stuck in a machine that didn’t care about us. I very much doubt that the NICU saved Kass’s life, but I could be wrong. Regardless, I wish the system and some of the people working within it were more supportive of new parents at such a vulnerable point in their lives. As far as the NICU goes, it was a long three days, and I’m glad those are behind us.

Kasper is about six weeks old now. Daniel’s grandmother met him the other day and kept saying, “He’s so nice,” and I was amused because I happen to agree with her, but I’m not sure how we’ve drawn that conclusion. He moves his face spastically through a dozen expressions in a row, eyes attaching and then quickly detaching from faces, objects, and flickers of light. His body has become less pink, more fat. He has been held by dozens of friends and family members, kissed a million times by his parents, and licked occasionally by his dog.

When I was pregnant, I wrote him a series of letters while on my lunch breaks and I often didn’t really know what to say. The only topic that routinely came to mind was climate change and I would tell him about extreme weather events, disaster preparation, and what a beautiful planet we’ve been born into. Now that he’s here on earth with me, living in the same house, I still don’t quite know what to say. He doesn’t care, though. He looks at me with the most patient, open face. I sing songs and trail off when I realize I don’t know the lyrics. I fumble through diaper changes and breastfeeding positions. He’s a presence, both tiny and huge. He’s a mystery slowly unfolding. 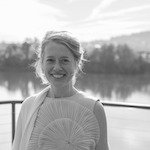 Jess Williams lives in Pittsburgh with her family: Daniel, Kasper, and Manny.