The past is a foreign country; they do things differently there.
L.P. Hartley

That quote knocks me out so much I wanted to use it to launch into a safari through my own history. Perform a little dispassionate examination. No judgey-ness about (most) things, just a backwards look.

But, you know, pandemic.

There is no yesterday. Or tomorrow. Only now.

I do not allow myself to actually think about what the lock-down represents. The deaths. The crushing losses. The wasted economy. The lurking dangers to those I love. So, I don’t.

Instead, I just am.

The weeks have softened into each other. There are no definitive edges to anything anymore. Just a slow melting. While I’ve always been content to appreciate life unfolding from the comfort of my sofa (one of my brothers has long-called me a cockroach because of my limited perimeter) the quarantine is so enervating, so draining, it feels like staring at a screen-saver of water.

But of deep water. With a riptide beneath the surf. And the possibility of sharks entering the frame.

(Or, in a less nautically terrifying metaphor, the present has taken on the dangerous contours of my formerly serene backyard– which is suddenly home to coyotes, thus making a simple dog-walk an exercise in risk-taking.)

While I haven’t done anything essential in a long time, my husband’s a doctor. He’s gone to work. I’ve contributed by not carrying hospital germs outside of the house. So with the exception of grocery shopping and trips to an outdoor nursery for our new victory garden, I’ve stayed home.

Oh, and there was also an emergency trip to the vet’s because the dog ate the soil of a blueberry plant that I’d mixed with acidic additive, making it the most expensive fruit plant ever:

Our son came and quarantined with us for a month which was really nice. He helped cook and clean, leaving me to do, um…nothing. After he left I texted him lamenting the general decline around here. He responded that I needed to tighten things up.

We haven’t seen our oldest daughter, who is immunosuppressed, since February. Our phone calls have diminished into drive-bys:

Me: Okay, talk to you tomorrow.

Our youngest brings the grandkids to use the swing set (someone always on coyote-watch) but we only share pretend hugs from the porch, me acting like my arms don’t actually ache to hold them as I stupidly squeeze my own shoulders in a surrogate grip. The nineteen-month-old humors me by doing it, too—but with a look of serious concern on her face.

My grandboy occasionally asks about the changed world. I blame the Virginia Governor (in addition to being a politician, he’s a pediatrician—he’d understand.) but explain that the new rules are good rules, to protect us from a bad cough that’s catching.

I can’t actually tell him the truth, of course. He’s only four. He watches Daniel Tiger, the spin-off of Mister (Look-For-The-Helpers) Rogers. Imagine learning that our President lied, spinning, spinning, spinning, until it was too late. Or that the man treats blue collar workers as fodder for the 1%—ordering meat packers back to dangerous jobs despite the likelihood of catching the disease. Or rather than procuring masks for health care workers, he authorized Blue Angel flyovers to show appreciation.

So I don’t. My grandson will study current history down the road.

And in the meantime, even though there is a frost warning tonight, I’ll point out the roses that are in bloom, today. 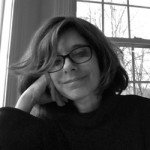 A novelist, Erika Raskin is the fiction editor at Streetlight. Hunkered down at home in Charlottesville, spending her days thinking about cleaning the kitchen, she recently learned that Shakespeare wrote King Lear during the plague. To which she says, whatever.

3 thoughts on “Dispatches From The Couch by Erika Raskin”