The visit was long overdue. At my wife Margie’s suggestion, I decided to do something about it.

So, on a summer day that was forehead-dripping hot with a steely blue sky, the two of us strolled in shorts and sandals up the Toronto street where I first lived. The cicadas sang lustily.

Did they remember me?

We walked past Charlie Haskin’s house. It hadn’t changed as far as I could tell. I recalled sitting in the back seat of his big gray Ford Tudor sedan in 1946 while waiting for my mother to emerge from St. Michael’s hospital with my just-born sister. Quickening our stride, we went by Mr. Egan’s place, which also looked about the same. He had owned not just one, but two black Chevrolet Fleetmasters that most days stayed in the garage in the rear laneway, because before my sister‘s birth it was wartime, and we had gas rationing.

Now I was almost running, my wife not far behind. Out of breath at seventy-six, I suddenly stopped. There it was! Number 355 . . . telephone number, Melrose 6674. Trembling with excitement, I scrambled up the steps to the front veranda and knocked softly on the screen door. I didn’t want to scare the memories away. Behind that door, my life began in 1942. It opened abruptly and a boy as wide as he was tall greeted me. My wife, a retired elementary school teacher, figured he was about eight.

“Whaddya want?” he snarled in a high-pitched soprano voice.

Not quite what I was expecting. His fiery little eyes staring up at me melted my boyish enthusiasm, reducing it to a sad, quivering puddle of uncertainty.

Unimpressed, he continued his laser-like stare, arms like a junior weight lifter menacingly folded across his broad chest. Remembering that I was the adult and this domineering door attendant was a kid, I decided it was time to take control of the situation and identify myself:

“Hello. My name is Margaret and this is my wife, Tom,” I spluttered, pointing to my wife standing at the bottom of the veranda steps. I wasn’t trying to be funny. This tough little guy with his street gang demeanor had really unnerved me.

A couple of minutes later, the four adults who lived in Number 355 came to the entrance. The young sentry stepped aside and suddenly my maturity returned. Trying to muster up a pleasant, more secure sounding tone of voice, I repeated my reason for knocking on their front door on this sweltering July day.

“It’s great to meet you,” said the border guard’s cheerful mom, a small woman not much taller than her son. “I’m Lucy and this is my husband George and my parents Doris and Al. I see you’ve already met our son, Richard, when he answered the door.”

“The street is probably a lot different from when you lived here,” added George, a beaming, heavyset man who towered over everyone else.

“You’re right about that,” I replied. “But on the outside this house seems pretty much like it did then.”

I hoped they would invite me in, so I could see the inside. They did not. However, I managed to peek into the front hallway through the partly opened screen door. A brown-haired boy of about five or six appeared to be sitting on a lower step of the nearby stairway that led to the second floor. He smiled at me as he briefly held up an object in his hand. It resembled the Cisco Kid arrowhead my mother bought me with Rice Krispies’ box tops when I was his age. Mine had a place for secret messages and a siren you blew with your lips. That was in the late 1940s, so not a toy that today’s kids would find interesting, since it wasn’t a computer. The boy said nothing and I had no chance to ask him what it was and where it came from, because the door was closing. Disappointed that I wouldn’t be going inside, I did blurt out that I would come back soon with photos of the house from my time there. Maybe they would let me in then.

One thing piqued my curiosity, though. Why didn’t his parents call the boy to the veranda and tell me his name? They had introduced everyone else. I had only seen him for a moment. Did I imagine him? It was a bit disconcerting. I was feeling emotional as the memories came flooding back.

I started down the steps to join my wife who still waited patiently at the bottom. Halfway there something brushed by me. Then I saw, or at least thought I did, the mysterious little boy from the stairway, carrying the Cisco Kid arrowhead. He turned and beckoned me to follow. That was when I figured out who he was. He was me, at least my remembered me, the “me” of my childhood. He extended his hand and I took it. He led me through the land of memory to my long-ago life at Number 355.

One July morning in 1948, I dashed outside and skipped down the street in my new cowboy outfit. It was my sixth birthday and this was my present. My best friends, Billy and Jerry really liked it.

“Did you get a pony too?” Jerry asked as he handed over his own gift, wrapped in newspaper. “Happy birthday. I hope you like it.”

“Thanks Jerry.” I couldn’t look him in the eye, so stared at the comic book cover. “It’s just what I always wanted.”

However, there was no way I could know in 1948 that in twenty years it would be considered a first edition comic in mint condition, worth hundreds of dollars. At least it would have been if my mother had not thrown it out later on. Without asking me, of course.

It was early afternoon and not yet time for supper so the three of us sauntered up the street, stopping to grab some ice chips from the iceman’s home delivery truck to cool our throats from the blazing sun.

As we ambled along Billy said, “I saw something strange the other day. There’s a really creepy person living up the street. C’mon. I’ll show you.”

We slithered over the freshly mowed lawn of a house a few doors away from Billy’s place. Our hearts pounding, we crouched down trying to stay out of sight and stared through the window at a figure sitting in a chair in a darkened room. It was a woman wearing an orange towel over her hair.

Her face was covered with what appeared to be . . . mud.

The figure in the chair must have heard us because she rushed to the window and furiously closed the curtains. We screamed at the top of our lungs.

“Let’s get out of here,” Billy hollered.

My fear disappeared when Chrissy, the red-haired girl who lived in the house next door, came by. She invited me over to her place to see her birthday present for me.

“It’s not really something I can give you to keep,” she said. “I still think you’ll like it.”

It was a gift I could only look at. I had seen movies at a nearby theater, where I would lie my head on my pop’s knee when it got too scary. This was different. In a corner of Chrissy’s living room was a big white wooden box with a very tiny screen. On the screen was a chubby-cheeked man holding a big doll. The box could talk too. I was amazed. A movie in your own house! Years later, I would remember what the constantly grinning man named Buffalo Bob asked his cheering kid audience and their excited replies.

I had seen my first television program.

Later, back at my own house, I ate a birthday supper finished off with a special dessert, chocolate cake and strawberry ice cream. Afterwards, I sat cross-legged on the olive-green rug in front of the huge brown cabinet that housed the Stromberg-Carlson radio with its yellow dials. I waited with mounting anticipation for the first note of what I would one day learn was the William Tell Overture, followed by the announcer’s voice shouting, “Hi -Yo Silver. . . . Away!” My favorite western hero after the Cisco Kid, The Lone Ranger, was about to come on. I had lots of cowboy heroes; Tom Mix, Hopalong Cassidy, Gene Autry, Roy Rogers and Dale Evans. My pop even lulled me to sleep every night with a cowboy lullaby titled, Go To Sleep My Little Buckaroo which was written by Jack Scholl and M.K. Jerome.

The next day, my birthday over, I joined Billy, Jerry and some other boys on an important mission. We needed to check out a fort made of cardboard boxes that stood in the laneway behind our street. Somebody had invaded our territory and we were mad. We advanced on the intruders’ fort like crusading knights. A hundred feet from the foreign stronghold, we could see that the trespassers were big, and they were brandishing sticks. As the other intrepid knights pressed on with the attack, Billy, Jerry and I began walking backwards. Soon we were in full retreat. If the invaders wanted to own the laneway, they could have it.

I scurried through the backyard to Number 355 where I always felt safe, told my mom about my perilous adventure, and cocooned in her affectionate embrace.

On a blue-skied afternoon in the late winter of 1949, my mom told me we were moving. I raced upstairs as I had done hundreds of times, not even pausing on the step where I first played with my Cisco Kid arrowhead. I passed the landing where I would secretly watch my parents and their friends dance the night away on New Year’s Eve. When I arrived at the second floor where our landlady Agnes O’Brien lived, the landlady who loved me with a fierce love, I didn’t stop as usual, waiting for her to spoil me with a treat. Instead, I climbed faster and faster and higher and higher through the 1950s, ‘60s, and beyond, leaving my first boyhood home forever.

At seventy-seven, in the golden evening of my life, I closed my eyes and dreamed that I had returned to Number 355. The cicadas were singing once more. The front door was unlocked. I stepped inside.

Seated at a table in the living room were my mom and pop playing cribbage, my baby sister at their side.

I sprinted up the stairs, this time stopping on the second floor. Agnes O’Brien was making my cherished chocolate chip cookies. She smiled and handed me one. I took a bite, savoring its taste, savoring my childhood.

I had come home, if only in my dreams. 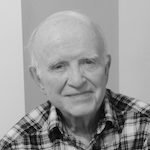 Thomas Laver is a retired high school teacher and a former educational writer for TV Ontario, the public television network of the Province of Ontario. His writing has also appeared in The Smart Set Magazine, Heart Insight Magazine (American Heart Association), Canadian Teacher Magazine and Our Canada Magazine (A Reader’s Digest publication).

One thought on “The Stairway by Thomas Laver”