“I was most grievously undone
when I lost my footing on the shelf
and swan dived to the floor
splayed and back broken”,
says the complete works of Shakespeare
who now leans against the cash register

“We are—so many of us—a musty assemblage of forgotten words.
Trees pressed into paper to hold our messages.
Conceived by some dreamy word dabbler long gone.
Escorting the appreciative few from womb to tomb
Yet now shorn of dust jacket
now a deterioration of spine
dog eared pages and torn scripts
Are we soon to be consigned to a burn pile?”

The selected poems of Elizabeth Barret Browning flutters her pages
“Slings and arrows Will” she says woefully
“slings and arrows”
“One for all” rallies
a volume of the stories of Dumas
“Ours is not to reason why” says Tennyson on the third shelf in 19th century literature.

asserts a copy of ‘Wind in the Willows”

“Looses herself in my illustrations, she does.
Toad and badger still wing her imagination.”

Where you going to go Jack?” asks Alan Ginsburg caressing his cover lovingly.
“The doors are all locked.”
An old dog escapes from Herriots work
and nuzzles the bard.
“Read to us William
in your stentorian voice.”
they all plead.“

Read us through the night.
We still love you.”
. . . and so he begins A Midsummer Night’s Dream
while the other volumes nod approvingly. 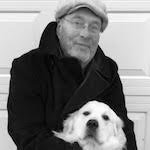 Gary Beaunier won Streetlight Magazine‘s First Prize for his poem Night Train to Paris. His work has appeared in numerous other publications. His chapbook From My Family to Yours has been accepted by Finishing Line Press. He taught poetry in a women’s prison.