The day slipped into dusk as the ambient light ebbed imperceptibly like the liminal moment before the tide changes direction. Robin removed her Ray-Bans and stared up at the wide-open heavens above the El Charco Nature Preserve. Nostalgia? Sadness? Triumph? She couldn’t quite identify the emotions flowing through her young veins. In the surrounding sky, thirty thousand bronze cowbirds swirled and swooped in vast, coordinated waves, forming a shifting black cloud. The very air trembled with their beating wings.

It had taken a fair amount of convincing to get several of her sorority sisters to travel with her to Central Mexico for spring break. First, she proposed a spiritual quest in the footsteps of Jack Kerouac, but was met with blank expressions. Apparently her non-English-major friends knew nothing about the Beat Generation. So dropping all pretense, she lured them in with the promise of cheap alcohol, lots of dancing, and plenty of young men anxious to meet American college girls. The inexpensive shopping and beautiful weather sealed the deal.

The birds continued their aerial display in complete silence. Only the rush of their wings could be heard in soft crescendos when they changed direction. Robin closed her eyes to listen more carefully. It reminded her of a lullaby.

“You know what they call a group of crows?”

Startled, Robin spun around and faced a tall, wretched-looking man standing behind her on the pathway. She had no idea how he’d approached so quietly. Perhaps she had been too lost in her solitude. Perhaps it was Neal Cassady’s ghost arisen from the railroad tracks outside San Miguel de Allende. He kicked a stone that rolled past her and splashed into the placid reservoir.

“Excuse me?” she said. Each tiny hair on her arms stood erect, and her pulse quickened.

“You heard me.” His raspy voice was as dry as the high desert air; his accent clearly American. He shoved a hand deep in the pocket of his ripped, faded jeans and stepped forward. The coalescing birds passed low overhead, creating a momentary shadow.

Robin stepped back to the water’s edge. In the dying light, she noticed his head twitch like a bird of prey as his sallow eyes locked onto her. His left hand undulated beneath the denim while his right hand remained hidden behind his back.

Looking to her left, Robin saw a mangy dog the size of a coyote slinking toward her along the upstream bank of the reservoir. The man clicked his tongue and the dog froze, ears pinned back, tail rigid, waiting for his master’s command. Not good, she thought. Her father would be disappointed. He had brought her to this very spot when she was a young child to witness the murmuration of the birds and had warned her, “There is safety in numbers.”

At some unknown cue, the birds dropped en masse into the safety of the trees to roost for the long, cool night. The soft murmur of their synchronized flight hushed into silence, and the sky darkened another shade. Robin was on her own in the middle of Mexico far from her Florida home and her father’s protection. How could she have been so careless?

“No gracias,” Robin said. “I mean, no thank you.” The man was blocking the return trail, and no other birdwatchers were nearby. The main park had been closed for over an hour, and she knew her cell wouldn’t pick up a signal out here. She imagined her girlfriends back at the hotel laughing and primping in front of the mirror, preparing for a night of bar-hopping and clubbing.

“Never!” she screamed and bolted to her right along the shoreline, sprinting deeper into the park, away from the cab waiting back at the entrance. Maybe she could circle back if she ran fast enough.

She glanced over her shoulder and saw the dog take off after her in silent pursuit. Her foot caught on a knobby root, and she tripped sideways into a large barrel cactus. The needles pricked her bare thigh, leaving spots of blood. As she scrambled to her feet, the dog lunged at her. She braced for the impact and managed to deflect the dog over her shoulder into the water. Frantically, she took off running down the path, her heart pounding in her chest.

When she arrived at the dam, Robin vaulted up the stairs three at a time and waded into the strong current of the spillway, anxious to get to the other side where the birds had settled in the dense foliage. Clinging to the railing, she felt the rushing water grow stronger with each step. As the water deepened, the tugging on her legs swept her feet out from under her, and for a moment she dangled over the deafening waterfall that plunged sixty feet into the narrow canyon. Regaining her footing, she retreated out of the spillway and streaked downhill past the old mill. For a second, she paused to catch her breath behind two trusses holding up an eroded wall and saw the wet dog rounding the bend at the top of the hill. He stopped to sniff and shook the water out of his coat.

I can’t outrun the dog, she thought. There must be another way. On her right, she noticed a small sign written in Spanish and English urging hikers to remain on the trail. “That’s it!” she said and deftly jumped onto the surrounding rocks and climbed higher. The dog leaped at her feet, snapping his jaws, but couldn’t ascend the small shelf. A low growl emanated deep in his throat as he circled below her on the gravel pathway.

Robin felt a brief moment of triumph at having twice outsmarted the dog and began scaling farther up the rocky walls, jumping from rock to rock ever upward. Then she heard barking followed by a two-beat whistle.

“Shit!” she whispered. The damn dog had given her away. She kept climbing. At the top of the ridge, she held out her cell phone and prayed for a signal—no bars. On her left, a large circle of brush and dried grass sat perched on a flat rock. Twisted in the branches, Robin noticed a tattered bra and a pair of torn panties that appeared to be stained with dried blood.

“Have you found my nest, little chickadee?” The man’s voice called up to her from the base of the ledge. He seemed to be in no great hurry, like he was saving his strength.

She ran to the far edge of the ridge and could find no way down. I’ve cornered myself, she thought. They herded me up here like a dumb animal. A breath of mist arose from the dark depths, and she peered down the eighty-foot drop into El Chan—the cursed spring at the bottom of the waterfall. Anyone who touched its sacred waters was reputedly doomed to suffer a horrific death.

“Welcome to my humble home.”

Robin turned and saw the man standing next to his nest, his left hand deep in his pocket, aggressively stroking himself. In his other hand, he held a large bowie knife. The empty sky behind his silhouette seemed to grow darker by the second—even the stars had abandoned her.

“You never answered my question.” He pointed the tip of the blade at her. “What do you call a group of crows?”

Robin knew all too well the answer to his question but refused to satisfy him with an answer. Desperately, she searched the ground for something she could use as a weapon: a rock or a heavy branch. But the only thing she saw was a strange yellow ladybug crawling along the damp, rocky ledge. She recalled the old nursery rhyme and wished she, too, could fly away home.

“Well, chickadee,” he asked as he flipped the knife and caught it. “What’s it gonna be: fight or flight?” 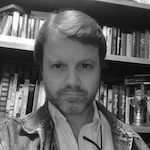 S.W. Gordon graduated from the inaugural class of Stetson’s MFA of the Americas in 2017 where he studied under Mark Powell and Terri Witek. He also holds a BA in English from the University of Iowa. This is his first publication in literary fiction. You can follow him on Facebook.

One thought on “The Murmuration by S.W. Gordon”