From a distance I saw a frog, standing
like a soldier in a field of summer
grass. Up close, the creature looked alive.
My curious dog sniffed its warty behind.
I, too, touched its stiff and tailless end
with the blunt unfeeling tip of my white
summer sneaker. Later, we found another:
the stretched-out skin of its helmeted
head, arched above its shoulders round;
its fore and hind legs spread, poised like a
soldier for action. Closer inspection showed
death: a flat black disc of missing eye and
fat, red tongue in locked jaw extended.
The disaster must have happened only
moments before. Struck perhaps by blind
wheel of car, its intestines expelled by
force not choice. Here’s a plot, I thought,
not ever to be resolved. Here’s a frog
at the height of its power, ready to
croak out its shocking blah, blah, blah;
though not singing; the very opposite of
singing; stopped midcourse, the whole
remarkable spectacle showing to highly
informed intellectual delight the exquisite
form of the mature frog. What arrogance
of unimaginable wealth could create
this careless waste of long labored-over
beauty only to destroy it, I thought;
and then I thought of what’s to come
for me: hidden on this side street, set out
in ghastly show: Exhibit A. Misstep.
Blunt force. Final blow. 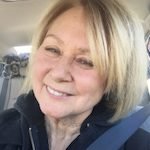 Lisa Low is a Connecticut based poet. She has a PhD in English Literature from University of Massachusetts; taught for twenty years as an English Professor; was a TV theatre reviewer for Christian Science Broadcasting. She has published an edited book on Milton and the Romantics with Cambridge University Press, and poetry with Intro 11, Phoebe, Aphros, Delmarva Review, Broken Plate, Boomer Lit Magazine, Litbreak Magazine, Evening Street, Crack the Spine, Tusculum, and Potomac Review, among others.