“I told you we should have made reservations,” Maya said.

“But this trip was supposed to be about spontaneity.”

Maya and Zephyr were driving across the country in their new used RV. They were celebrating Maya’s retirement after thirty-five years of teaching high school science and Vermont’s passing Marriage Equality. Finally, Maya no longer needed to worry about getting outed at school and she felt a new freedom. Zephyr had never had that worry. As an independent IT contractor no one gave a damn about who she slept with as long as she fixed their computer problems.

They’d been a couple since 1986, longer than most of their married straight friends. Neither expected to feel any different after their relationship was legal. And yet Maya did. It felt more settled, more permanent. It surprised her how good it felt to have their relationship recognized by the state.

They’d settled on this RV, because new ones, even small ones, went for over $120 grand. When they bought it, its compactness impressed them. But the so-called “wet bath” (having the toilet in the shower) took some serious getting used to. And sleeping in twin beds, not able to cuddle at night, was also a drag. Sometimes though, after spending all day with Zephyr, it was a relief to sleep alone. In their excitement to begin their adventure, they gave no thought to how it would feel to be cooped up in a tiny space for hours at a time after driving all day.

They’d been gone for six weeks. Along the way they’d visited several national parks and stayed at numerous campgrounds. Their favorites were the Great Smokey Mountains and Indiana Dunes, which she had to admit looked like the ocean. Yellowstone, with its huge crowds, was a disappointment.

But now they had a problem. They were in the middle of Montana and had been driving for ten hours. They’d underestimated how long it would take to get to Glacier National Park and were both exhausted. They needed to find someplace to stay, pronto.

“Why don’t you go online and see what options there are?”  Maya asked. Zephyr ran her hands through her short, spiky blond hair, grabbed her phone, and started typing. She wished Maya could chill for once.

Maya was chilling though. She was admiring the jaw-dropping Montana scenery. It was unlike anything she’d seen back East. New England had mountains too, but the wide-openness of Montana took her breath away. The immensity of the sky.

“Listen to this,” Zephyr said. “This article from the New York Times called ‘Welcome to Walmart’—”

“You know how much I hate that place. We’re not going there.”

Zephyr’s jaw tightened. Couldn’t Maya leave her politics aside for once? “Wait. Just listen to what it says here before you say we’re not going there.” Thumper, their chocolate lab, tried to come up front between them, but Zephyr shooed him back.

Maya switched her sunglasses for regular clear glasses and brushed her long gray-streaked hair out of her face. She sighed. “Okay, what does it say?”

Zephyr’s green eyes were still focused on her phone. “This really might solve our problem.”

“It says here that most Walmarts let people stay overnight in their parking lot. For free.” She fingered the row of five stud earrings that lined her left ear.

Maya gripped the steering wheel, her knuckles white. “So what? We’re not staying there. It won’t be safe.”

“Some stores stay open twenty-four hours, so there’ll probably be some kind of security.”

“Do you need a reservation?”

“Not really. Says sometimes people call first to make sure it’s okay.” She reached into the glovebox for the flashlight, grabbed the map, and started poring over it. “Looks like we have at least a couple of options. The closest one is gonna be in Great Falls. It’s open all night.”

“I’m just not comfortable with that.”

“We don’t need to go inside or buy anything. Except gas.”

“So, what do you suggest?” Zephyr asked.

“I don’t suggest anything! I’m driving.” Her voice was laced with irritation.

Zephyr let out an exaggerated sigh.

“Fine. You win. Get directions.”

Zephyr plugged the address into her phone. “Says it’ll only take thirty-two minutes.”

“OK. I need a break.” They followed Siri’s instructions to the Supercenter on Smelter Avenue in Great Falls.

“The street name should have been our first clue,” Maya grumbled, pulling into the parking lot.

“Well, other people are here. So that’s good.”

A variety of rigs had already parked there, maybe thirteen or fourteen. A couple of semis, several RVs and motorhomes, and a few vans and pickups. People sat outside on folding lawn chairs enjoying the evening. Maya maneuvered into a spot, not too close, but not too far away from them. By then, it was almost ten and totally dark.

As soon as she turned off the RV, Maya exhaled. “I need to get out and stretch.” She opened the door and hopped down, immediately greeted by an oily stench. “Boy, it stinks out here. Zeph, let’s get Thumper out. He must need to pee.”

Zephyr piled out with Thumper, who shook himself awake and immediately peed. “Oh good. I see some grass over there where we can take him for a quick walk after he eats, make sure he poops.”

“It’s so quiet,” Maya said. “Except for the interstate in the distance. Sure stinks though. Everything about this gives me the creeps. I hope we don’t regret this.”

“It’s not like we had any other options. Relax.”

“Look at those stars, Maya. The sky just doesn’t look like this at home, does it?”

“Not as much ambient light out here. That full moon is magnificent.”

After the tension of the last hour, Maya was happy to sleep alone in her twin bed.

The next morning, they ate cereal in the van and took Thumper outside to give him a quick walk before they gassed up and got on the road. As they headed for the grass, they passed a beat-up Chevy van. A furry covering of rust coated the wheel wells, and slices of brown paint flaked off. A rail-thin guy clambered out of the back followed by a big, black Rottweiler mix, who immediately left a big steaming pile on the asphalt. The man wore a dark, bushy beard, giving his tan face a threatening look. Long salt and pepper hair poked out from a baseball cap. In chunky boots with trailing laces, he slammed the back doors and walked to the front of the van. The dog hopped in first.

Zephyr put her hands on her hips, indignant. “You’re not going to leave that there, are you?”

Maya stood close to her and whispered, “What are you doing?”

A cigarette hung from the guy’s mouth. “What business is it of yours?” He took out the cigarette and spat a big hunk of mucus in front of Zephyr.

“Clean up after your dog!”

But Zephyr grabbed Maya’s arm so she couldn’t walk away. “Come on, mister. Walmart’s nice enough to let us stay here for free. The least you can do it pick up after your dog.”

“Shut up, ya dyke bitch, and mind yer own fuckin business.” The Rottweiler made a low growl from the van’s seat.

Maya started to shake. Her gut had told her this was a bad idea. She couldn’t decide who scared her more, the dog or the owner. Then she noticed the rifle in the rack behind the driver’s seat and pointed it out to Zephyr.

The guy ducked into his van and came out holding a gun by his side.

“How the hell do you know that?”

“I grew up hunting.”

“What? You did? With handguns?”

“Of course not, but we had those, too. I learned to shoot when I was old enough. Loved it.”

You’ve got to be kidding me, thought Zephyr.

“Maybe we should get one,” Maya suggested. “Guns are the great equalizer.”

“You can’t be serious. Whatever happened to my wife the liberal? No way! It’s not even—you have to apply for a permit in the state where you live. Vermont is three thousand miles away—”

The bearded guy stood fifteen feet away and watched this conversation unfold. “If you want your own in a hurry, I can point you in the right direction.”

Zephyr looked at her wife in astonishment. What else would she learn about her as they toured the country in cramped quarters? 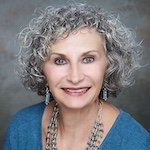 Bonnie E. Carlson lives and writes amidst the saguaros and chollas in the Sonoran Desert. Her stories have appeared in magazines such as The Broadkill Review, Across the Margin, Fewer Than 500, and The Normal School. Her novel Radical Acceptance was published in January, and her short story collection, No Strangers to Pain, will come out in November. Find more of her work at www.bonniecarlsonauthor.com and follow her on Twitter: @carlson_bonnie.