I’m holding the reins of a twelve-hand half-Shetland pony when I get the call. My daughter hops into the saddle, I release my grip, and off she goes to the riding arena for her Pony Club lesson.

Hello, I say into the cell phone. My office, a quirky second floor space I rent in a large historic house divided into small offices, has been broken into overnight. The photographer who rents space across the hall from me went in to work and found massive damage.

It’s every office, he says. It’s bad. You should come when you can.

For over twenty years as a psychotherapist in private practice I have studied and utilized sandplay therapy in my work with clients. I find that most clients, whether children or adult, are drawn to the rectangular trays holding fine white sand, as if they know without being told that healing happens there. Sandplay therapy is based on principles first developed by Carl Jung and later adapted by Dora Kalff.

I watch my daughter and her painted pony jumping cross rails with the other Pony Clubbers and their mounts. They’re adorably cute but now my mind is preoccupied with what my office might look like. I envision years of accumulating sandplay miniatures wiped out in one night of robbery and chaos. Miniatures that mean something to the clients who use them. The thought of thieves violating the space where I work, where my clients work, is painful. There will be months of sessions addressing this, especially if the items clients use in their sandplay are no longer available to them. How will I replace all the pieces it took twenty years to collect?

In sandplay therapy, clients are presented with trays filled with sand, along with a collection of small figures, or miniatures, which represent anything and everything found in the natural and material world.

After the lesson, we load the pony and drive the forty-five minutes to our farm. I trade the truck for our car and make the thirty-five-minute commute to my office. With each mile I flash to images of destruction: holes in walls, broken doors, sandplay miniatures crushed to bits.

The little emergency worker holding a lantern that a young client uses in every tray. The white horse that appears at the center of another client’s trays. The amethyst that one uses regularly, and holds in her hands when we talk after she finishes the tray.

My cell phone rings and the photographer tells me the police are there and would like to interview me when I arrive. I say I’m fifteen minutes out.

The sandplay process offers the client the opportunity to work in the sand, either dry or using water, with or without the miniatures. The resulting trays often represent the client’s inner world, conflicts, hopes, and dreams.

My mind goes to the therapy schedule coming up during the next work week. Which clients are scheduled, how this will impact each of them. Most of my clients have trauma histories, at least half are children. The break-in alone will be stressful, a violation that will press the lasting bruises of previous violations they’ve lived through. Losing the miniatures they use in sand trays will evoke grief in all its phases. Each miniature a client uses carries symbolic weight. I do not know what the impact will be of losing the symbols of one’s unconscious. Many of the miniatures are one of a kind, not replaceable. Most clients use at least some of the same figures more than once in their processes.

I hope the trays themselves are intact. Ordering new ones will mean weeks, if not months, of waiting. Is the man who made my sandtrays even still in business?

Dread fills the car as I make the turn onto the tiny street that leads to the big white historic house, into the small graveled parking lot that wraps around two sides, shielded from the busy street by old and regal evergreens. From the parking area all looks normal, except for the police car and the cluster of people on the front porch.

The therapist provides a safe and protected space for this journey by silently holding and containing the client’s emotional states and conflicts.

When I walk up the steps, the photographer introduces me to the policeman.

I’ll walk you through, he says.

Downstairs, the thieves came through a window in the editing and printing business that takes up all the office space on the first floor. Their work utilizes many computers and expensive printing equipment. The window was opened without force.

The officer explains that he found footprints outside the window and fingerprints on the glass panes. He speculates that since the office was painted the week before, one of the workers intentionally left that window unlocked so they could come back on the weekend.

But the planned robbery theory falls apart because almost nothing is actually missing. Instead, computers have been thrown to the floor in what looks like attempts to destroy them. Printing equipment has been smashed. Every desk is bare, all the contents broken on the hardwoods beneath.

The carnage of expensive items destroyed and left behind is upsetting, anger and violence made visible.

The officer shakes his head. The photographer sighs. We don’t know.

Upstairs, the photographer and graphic designer let me in to see their offices. More senseless destruction. A few items are possibly missing but it’s difficult to tell with the floors covered in things that have been broken beyond repair. Expensive new and vintage cameras thrown hard against walls. Desks raked to the floor. Computer screens cracked and lying on their sides. The personal items, photos of loved ones, mementos, all the trappings of someone’s personal work desk, similarly destroyed.

The photographer gets a phone call and when he snaps his cell phone shut, says his wife insists that he pack his things and move out. The violence of the break-in has terrified her.

The officer says the owners of the house are out of town and haven’t yet responded to phone messages. He asks if I’m ready to go see my own office.

The process of creating the tray enables the client to nonverbally express both conscious and unconscious material. Through continuing trays, emotions and conflicts are worked through and past stresses and hurts are integrated. The result can bring the client to a state of wholeness.

We walk past the huge front staircase, down a narrow hallway, past the tiny back staircase that my child clients love, its white paneled walls and abrupt turns upward like a secret passage.

My space includes a small windowed area with an exterior door that has its own exterior staircase to the back parking area behind the house. I’m the only tenant who uses that door, and a few of my clients come in and out that way to their sessions. This door is secure. The officer makes a note of it.

The small waiting area, which has a green wicker loveseat and table with lamp and magazines, is undisturbed, except for the normally secure French doors which lead to my office proper.

Someone kicked this in, the officer says.

The French doors open into a small square room with two huge windows. Every reachable inch of this room with high ceilings has shelving from floor to seven-feet high, housing the bulk of my sandplay miniature collection. There are hundreds of individual items plus baskets of stones, gemstones, shells, tiny bricks, empty trays for clients to use when collecting the items they’ll use in their work.

I have dreaded this moment, seeing these shelves, imagining entire units of miniatures up-ended. But nothing, not one single item, is out of place. The officer looks at me in surprise. I shake my head. It’s bizarre.

The square room turns sharply into a long narrow hallway that leads to a tiny landing created by three doors. Along this tiny hallway, so narrow you can’t extend your arms to either side, are more shelves lined with hundreds more miniatures. Trees, little shrubs and pots of flowers, tiny buckets and baskets and tools, implements of the everyday world. People of every kind. Superheroes. Gods and goddesses from all cultures. Monsters. Animals of every species. Houses, churches, bridges, fences. It’s as if the world itself is laid out in this space, organized and categorized, perfectly aligned. I am the curator. Not one item is out of place.

The end of the hallway, the little landing space created by the three doors, is illuminated by the light from the door on the right, my actual office, which is rectangular with a wall of floor to ceiling windows. The door to the left leads into a bathroom; I keep it closed and locked. The door directly ahead leads to the graphic designer’s space; we both have locks which we neither one have keys to. The officer walks ahead of me, turning right through the open door into my inner office.

Clients often remark that the passage from downstairs, to my private waiting area and through the French doors, along the tiny hallway into my office, feels like they’re entering the inner sanctum. It’s true; in this rabbit warren of rooms, I view the innermost office as holy space. Which has now been trespassed upon.

I hesitate, not wanting to see what damage there might be. The inner office has two comfortable chairs with a small table and lamp between them. Three sand trays, all waist high for comfortable use by clients. More shelves and more miniatures. An extra chair for a parent or significant other.

When I walk into the room expecting the worst I am again shocked. Nothing is broken. Nothing is knocked over. Nothing has been touched.

I stand silent. The officer makes notes. This is something, he says. They kicked the door in but they haven’t touched anything else. Do you see anything at all that’s missing?

I look again. I don’t think so, I say. It’s hard to tell with all the tiny things. Something may be gone but I won’t know until I have time to really look shelf by shelf.

I keep glancing at the table between the two chairs.

I think something is gone from that table, I say, pausing to breathe. It’s the lamp.

It was old, the first thing I bought when I got my first therapy office.

So it was valuable?

No, it was a Japanese lamp with one of those paper shades. Small, well-made, but not valuable at all. The light it cast was soft, perfect to sit between me and clients. Loss hits as I explain. That light sat between me and every client I’ve ever seen, I say. For twenty years.

But it wasn’t valuable?

That’s it, I guess. The officer closes his notebook, we turn to leave the office. As I pass by the sand tray nearest the door I see something else.

I point to the sand in the tray.

Two man-sized handprints, one perfectly formed beside the other. Whoever came in put his hands into the sand. Drawn, in the midst of a crime spree, to the tray. Seeking help? Searching for light? Leaving his mark.

Neither of us speaks.

“Often the hands will solve a mystery that the intellect has struggled with in vain.” -Carl Gustav Jung 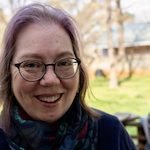 Billie Hinton lives in central NC on a small horse farm. She is a mostly-retired Jungian sandplay psychotherapist and spends her time keeping horses, bees, her native plant gardens, and a houseful of cats and dogs.