Toward the evening of the night I thought my mother was dying, the aide, who stayed with mom during the day, told me mom had been asleep for twenty-four hours and would not wake up. She sent me a picture of my mom, smiling and looking peaceful. The aide put the phone up to my mother’s ear so I could talk to her. It felt as if my lungs had closed and no breath would come, a drowning in sorrow and grief, as in the barest choking whisper I told my mother I loved her. I told her what I could say, what I hoped she already knew.

I knew my eighty-six-year-old mother would die. I knew she was near the end of her life. I knew that dementia had robbed her of her memories and her children of their mother. I knew that the loss of my father had crushed her. I knew how much I loved her.

Even though age showed in her face, my mother was still beautiful, her skin a porcelain white and her eyes light blue. Her warm smile was the same as always. Her laugh was the same. The way she raised her eyebrows when she thought someone was being ridiculous, the way she looked at whomever was with her for guidance, the stories she constantly told in a language only she could understand now.

Mom had been a fiercely devoted wife, a good mother to her three children, and a beloved grammy. She had also been a child model, the daughter of a single working mother in the 30s and 40s, and a woman who chose love over going to college. She spent many years as an active volunteer in our town. She heroically nursed her husband through his own Alzheimer’s journey.

Ours had not always been an easy relationship and she often told me I was “too much,” too much for her and everyone in my family.

Still, there were times of connections with mom, often around my Girl Scout activities and awards. These connections were like little electric sparks, a humming.

She was also the mother who stood to the side as the other graduates from our masters degree program and I processed in—with her hands on her heart and then extending her hands to me.

I worried about my mom dying alone that night and was frantic about what to do—could I find someone in charge to call for an aide to come overnight?

My mother continued sleeping that night. I prayed and could not sleep myself. The next morning the same daytime aide, who spent the previous day stroking my mother’s hand and telling her everything would be okay, called to tell me my mom was up, sitting in her wheelchair, chatting, and eating breakfast.

Another day of life for my mom. Another day to tell her I loved her. She was happy. She was smiling. 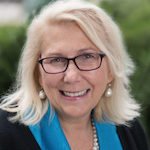 Cheryl Somers Aubin has been writing and publishing for almost thirty years, and her work has appeared in newspapers, magazines, and online journals. She has an MA in Writing from Johns Hopkins University and is the author of The Survivor Tree: Inspired by a True Story. Cheryl is the former nonfiction editor for Delmarva Review. She teaches memoir writing and is a featured speaker at book festivals, writing conferences, and workshops.