Once a week a Sergeant and a Driver were detailed to take the garbage from the Camp mess hall and dump it at the impromptu garbage dump out on the far end of the runway.

In a country where much of the rural population lived at the subsistence level, our garbage was a massive boost to their dietary fitness and soon became the center of a makeshift town.

So there I was, on the Detail and getting the brief from the Mess Sargent.

I nodded my assent and affixed my signature to the paperwork as presented.

“Those starving bastards can have the trash, they can eat the food, they can build houses out of the cardboard boxes, but the Commander had better not see a single “can condo” going up or your ass is on your way back to the States for loss of government property—do you understand?”

I gave him my verbal affirmation at the appropriate volume and with the relevant profanities necessary to fully indicate my understanding of my orders. I affixed my name and rank to the paperwork and placed my copy in my pocket.

Next came the weapon. That’s right. The Weapon. A 38 revolver with a shoulder holster—all signed for and acknowledged on its own appropriate paperwork which now also resided in my pocket.

I put the holster on, slid the revolver in the holster, and waited for the last words of instruction.

“Don’t let ‘em take the cans—use of deadly force has been authorized by the Camp Commander if the situation develops and the cans are in danger.”

I’ll be somewhat honest. Deadly force is what we did, so no, it didn’t strike me as anything out of the ordinary. Welcome to the World.

I left the mess tent and claimed command of my Driver and my Trash Cans. Off we went to the far end of the camp where hundreds of potential can thieves lined up and waited for the weekly dump.

The Driver clutched a warm soda in one hand and rambled through the gears on the ancient truck with the other while loosely maintaining a straight line to the dump with one knee up against the steering wheel.

As we pulled up to the dump he rounded up before the crowd, throwing dust and rocks across the front rows just to show we meant business. Didn’t matter. These people had been threatened and intimidated by professionals.

They just saw us as another group of “guys with guns”. A uniform was a uniform to them. Regardless who was in it, to them it was a clear warning of the potential for sudden violence. I learned that talking to an old man in one of the displaced persons camps. I asked him what he thought about the war. He looked up and answered, “The Government takes my chickens and tells me it is to keep them from the Guerrillas, the Guerrillas take my chickens to keep them from the Government, in the end I have no chickens.” So no, they didn’t flinch at the rocks and dust, they just accepted it.

The Driver swapped the can around in his hands as he tore into reverse with a mighty grinding of gears and popped the clutch, jumping the backend up and making a racket with the jumbled cans.

I stepped out, turned and climbed up over the metal side rails and landed at the back. I lifted up the back railing and began to tip over the cans, one by one. The people surged forward.

A noise behind me, one of them had climbed up over the rails and lifted a can. I pulled the revolver and shouted. He froze in a sudden tableau vivant—“Man with Can”—I pointed the weapon center mass, then without a thought, gave it the full gangsta turn. The can dropped.

A hand wrapped around my ankle—I looked down and mashed my foot into a dirty face. Now, you’re gonna ask, “How do you do that, how do you just up and stomp another human like that?”

Truth? It’s simple. Fear. You live just fine with Fear until one day it reaches up from a scrambling, crawling, screaming crowd and grabs your ankle and then you’ll do anything to get away from it.

I looked up and shouted to the crowd, raised the revolver into the air and slowly lowered it until it pointed right at the crowd.

They came to a rumbled halt. All those eyes turned up and looked at the revolver and the uniform that held it. The smell from the dump slowly covered us all with a stench filled reminder of where we were and just what it was we were getting ready to kill each other over.

They swarmed the truck. I stood back, put the revolver in its holster and watched as in minutes every single can and top was gone.

The Driver laughed. Finished the last of his soda and tossed the crushed empty into what was left of the crowd. Then he shouted a few words in the local language and sat back down behind the wheel. Some looked up. Others kept to their task, sorting food from not food. Value from valueless.

One by one, the cans returned. Each with its matching top. I loaded every single one and gave thanks. I hauled up the last can, with top, dropped the back railing in place and swung down to the cab of the truck.

The Driver looked at me, then the revolver and started to laugh.

I pulled the revolver out of the holster, opened it up and spun the cylinder.

I felt a wave of confused emotions overtake me. Anger at being duped, relief at never having the bullets to shoot anyone and a strange fearful embarrassment that I actually considered shooting anyone over trash cans.

I rode back in injured silence.

Turned in the Driver and Truck, Cans with Tops and one revolver, without bullets. I reported that all went well as I ignored the knowing grin of the Mess Sergeant. 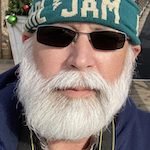 Harry James has been a farmer, soldier, civil servant, glass artist and always a writer. He currently lives in Kentucky with his wife who designs and creates jewelry.