It’s a common situation. In a closely-knit global community we find ourselves communicating in several languages.

The best part is that we don’t necessarily need to be conversant in the said languages. Indeed, with scraps of words picked up on social media, or copy/pasted from google translate, we can get a drift of where these multiple and gorgeous unknown languages might (to use Collin Firth’s words from Pride and Prejudice) tend to.

And what a thrilling experience it becomes – to write down and strikethrough meaning in multiple idioms, some of them forgotten, some of them in discovery mode.

Take my German words collection for example, which only holds four syllables:  Eingang and Ausgang (entry and exit).

My ignorance is a blessing in disguise in this case since there are no special/diacritical characters required when typing them = no pain locating such characters via keyboard shortcuts or “Insert symbol” from the main menu in Word.

The situation is different with the other two languages in which I occasionally attempt to express myself: French and Romanian. There, the pain is real, made unbearable by my lack of organization—no prepared word templates, no inventory or labeling of special characters—a total fly-by-the-seat-of-my pants mess!

With two adult kids busy with their own lives, there is no one to turn to for clever millennial suggestions or productivity tips – I am stuck in this predicament and the frustration grows.

I’m bogged down by diacritics, mired knee-deep in the swamp of wiggly symbols above or below vowels and consonants, which slows me down.

I’m constantly anxious that some of them might be missed, even after the spellchecker runs. It’s mostly vowels in French (vowels are awesome!) and a fifty-fifty split between vowels and consonants that use diacritics in Romanian.

I need serious help, but as always there is no time to stop and get help, so the limping along continues. It’s a classical scenario that calls for a pause and reset, counselling, or a certificate in Diacritics Management.

In the middle of this conundrum, a WhatsApp message arrives from my good friend Dr. Tatiana Arsénie. Tatiana is an artist and the co-author of the book Pictopoems of Berlin which we self-published two years ago. Tatiana tells me we should discuss the translation of our book into German and its editing.

All of a sudden, her thoughts sound like a very dangerous proposition to me, an Eingang into another entanglement, brought about by the brand new set of German diacritics, yet to be added to the repertoire. 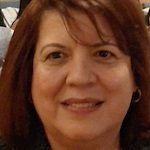 Irina Moga is a Toronto-based writer. Pictopoems of Berlin, co-authored with the German artist Tatiana Arsénie, was released in 2018. Irina’s Sea Glass Circe, a collection of poems, was selected for an official book launch through Toronto LitUp! and Toronto International Festival of Authors (TIFA) in 2020. Her work has appeared in literary magazines such as Canadian Literature, carte-blanche, PRISM International online and The Chaffin Journal.

Irina’s latest book, a collection of poems in French, is forthcoming with Éditions L’Harmattan in France. Find more of her work at www.irinamoga.com and follow her on twitter at https://www.twitter.com/pictopoems.