“Stephanie wanted you to have her eyes,” her sister Susie said. “Please say you’ll take them.” That was in 2018, the second time she died.

Seven years earlier, the blips on the monitor flat-lined, the alarm went off. The ICU team flew into action. Gloved hands thumped her chest, injected epinephrine, jolted her silent heart. Seconds ticked by. Minutes. Stephanie’s soul was suspended, a chrysalis dormant among the milkweeds. She languished between the light and the dark. That was the first time my best friend died. Later she told me where she had been, what she had seen.

“It was a golden room, and I was sitting on a golden throne,” she said, her voice calm, matter of fact. “I got up to go, but there was a glass wall blocking me from the darkness beyond. It must have been a sign.”

A sign for life, I think now, that prompted the blips to resume their rhythmic dance across the screen, the ICU team to exhale, her family to call me with the good news. A butterfly had emerged.

Stephanie has been gone for nearly a year and I am still waiting for a sign from her. A sign to keep me going, make me believe that we are not lost in a dark blur.

We met in ninth grade, bonded immediately as the “new girls,” whose families had moved from out-of-state several weeks after the school year had begun. After routines had already been established, friendships formed. We consoled ourselves in each other’s bedrooms after school, she brushing my hair, picking her guitar, I brushing hers, singing along. Together, we pirouetted through high school and college, silly, sweet, shiny bright secret-sharers. We were maid/matron of honor in each other’s weddings, in turn one in white, the other in purple. A pair of twins staying in close touch, building careers and families, exploring life. After I moved across the country, we visited once a year or so, texting and calling weekly between visits. Joined at the hip from the first days when we persuaded the Ouija board to foretell the future to the last when we paged through our high school yearbook at the fiftieth class reunion and chuckled at the past.

Stephanie believed in me, accepted me as I was, even at fourteen when other kids only saw me as the weird girl hunched over in class straining to read with a magnifying glass. She became my eyes, helped me with my locker combination and my boyfriend’s letters written in cursive too small for me to read.

But she is gone, and as the first anniversary of her death approaches, I feel a wave of grief rushing in. Not as fierce as the gray-green tsunami that first broke over me and fractured my being, that left me waiting for a sign our connection was still intact and always would be. I have yet to find a message written in the sand and I am still lost.

Her sister Susie has also been waiting for a sign, desperate to be reassured that she and Stephanie would go on together. At the funeral, Susie and I held each other, hugged all the gathered friends and family members. We stood in Stephanie’s sunny living room, part of a circle of twenty or so sharing memories, swapping stories. When it was time to leave for the airport, Susie laid a pair of Stephanie’s earrings in my palm. I felt the smooth fan shapes. Enameled?

“They’re cloisonné,” she said. “With green and white opalescent triangles. I have a matching pair at home.”

“We will have to wear them together on her birthday,” I said, hoping that Stephanie would see, would smile. That together we might conjure up her spirit; we would have our sign.

Back at home, I spent the first days in a watery world, my feet not working, not finding the ground. How many times did I reach for the phone to send Stephanie a quick text, or spend an hour chatting about nothing and everything? Old friends called, shared memories, emailed condolences. Susie and I still clung to each other, she in Ontario and I in Los Angeles.

Two weeks to the day after Stephanie died, my phone pinged.

“You have a new message from Stephanie Evert,” Siri said.

I sucked in my breath, tasted the bittersweet of “new.” The phone was Arctic cold, molten lead. Drop it, hold it close. I didn’t know what to do. Was this her sign? Was Stephanie reaching out, her hand parting the shadows of the netherworld? Had Siri become a medium in a twenty-first century séance? Inside I knew it couldn’t be true.

This was too eerie, a betrayal, not a séance. Siri was not smart enough to know Stephanie was gone and had left her phone behind. The algorithm could not tell whose thumbs were tapping the screen.

The words came from Marianne, her other sister, who had blanket-messaged everyone on the contacts list. Even those who had already been grieving, had attended the funeral and were still caught in the rip tide once the tsunami had roared back out to sea.

Susie and I wore the earrings on Stephanie’s October birthday, but it came and went with no sign. Nothing to tell me she wanted to stay connected. I began to accept that her spirit would never move in me the way my father’s had shortly after his death. When he had been cremated, I felt the fire release him, return his spirit to the stars through me. But Stephanie lies in an earthen darkness, and all I can do is hope the fingerprints I left on her casket are still with her.

July 24th arrives on a Wednesday this year, the vastness of it bearing down on me with all of its weight the moment I open my eyes. Perhaps I will feel her stir when I recite her favorite poem today, say Shel Silverstein’s words, tell her about the place where the sidewalk ends, as I did a year ago in the funeral home’s chapel. Maybe this time. . . . Maybe.

I stand in the kitchen with my morning cup of tea and stare at the phone, remember Susie’s call so early on that fateful Tuesday last July. The caller ID had said “Ontario” and I knew this was the call I had dreaded for months, years even. Stephanie’s out-of-control thyroid had won. Finished off what remained of her heart just as the ashen-faced doctors warned it would.

“It’s Stephanie?” I had asked.

“Gone,” Susie confirmed. She was clear, held herself together, seemed to understand what I needed to make Stephanie’s death real.

“Three of them,” Susie said. I wanted to throw up.

Before I could ask for the details, the description of her last hours, last words, last breath, Susie jumped in.

“Stephanie wanted you to have her eyes. Please say you’ll take them,” she said, heaving with sobs.

The words struck deep, hit an internal gong that reverberated in every cell of my body. I had no idea Stephanie wanted to make such a bequest. Leave me the precious gift of her corneas. Clear, beautiful tissue to replace the milky clouds obliterating mine. Delicate, complex tissue that would now be harvested from her sad, dead body when I believed she would still need them to see us from beyond.

Susie was sobbing and it was my turn to straighten up, hold myself together, deliver the bad news. But how? How could I tell Susie I was not a good candidate for cornea transplantation? Where were the words gentle enough to make her understand my eyes were too sick, in danger of collapse with one more surgery. How dare I explain, say that the probability of rejection was high even if my diseased eyes survived the surgery?

“What is your doctor’s number,” Susie choked out.

“I will be seeing him on Friday. Let me talk to him then,” I had said, hoping Susie understood and would be satisfied, willing to wait three days.

I felt another kind of pain rising up then, this one too ready to complicate the already desperate sadness of loss. It was another kind of mourning for the gift turned aside, wasted, the grace of it dishonored. The chance to have a part of Stephanie live on in me squandered.

At some point in the haze of the day, Susie texted to say she needed my ophthalmologist’s number. Nauseous again, my heart crumpled. I knew how awkward it would be, unseemly even, for her to be lost in the menu of options. . . . “To schedule an appointment, press one. . . . To speak to a physician’s assistant, press two . . . to reach the optician, press . . . press . . . press . . .” None would say “To donate a cornea, press eight or nine or infinity.”

The cornea bank called before I replied to the text. The quiet, patient voice on the other end asked if I had my surgery already scheduled. I said no and started to shake, the lump in my throat blocking anything but a whisper as I tried to explain there probably wouldn’t be any surgery. The voice was calm, a kindness that allowed me to swallow hard. She told me she would talk to the family, tell them I would always have a credit at the cornea bank. Corneas were only viable for fourteen days and Stephanie’s would go to someone else whose surgery was scheduled. Relief rushed over me, a warm current swirling within the cold tsunami of grief sucking me away, drowning me somewhere out at sea.

I let my doctor know on Friday and he said he was sorry for my loss and that the particular cornea bank holding my credit was a reputable one, good to work with should the time come.

It hits me now. Stephanie gave me a sign a year ago. She wanted to give me all she could, wanted to leave a gift most precious to someone like me who cannot see. Susie told me when she called so early on that awful morning. But her message was lost in the gray-green grieving. Stephanie wanted us to be connected. I can see it, the flitter of her butterfly wings, her sign that said we will be together for as long as I live. That sign will light my way. 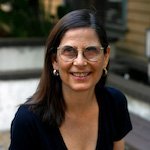 Carol Jeffers has published creative nonfiction, including the book The Question of Empathy: Searching for the Essence of Humanity (2018), and a number of short pieces. She also published a work of short fiction and has a novel in progress. More info can be found at www.CarolJeffersWriter.com.