When I was a toddler, I named my hands “Turner” and “Bobby.” Turner was my dominant right hand, the one used to access closed doors and cupboards. My parents say I blamed “Turner” when I spilled a glass of milk. “Bobby” was the diminutive for Robert, my father’s name. He would take my left hand when we walked or crossed the street. It is debatable whether this phase of early childhood can be remembered by a child of two, or if it is imprinted because I have heard more than once the story as told by my parents. Since I also recall the miniature moose who came out of the air duct under my bed at night to tell me stories, I have no doubt of the veracity of my own memory of referring to my hands as “Turner and Bobby.”

Turner and Bobby reappeared unexpectedly the other day in an online class to help writers return to the page when we are living through challenging times, be they our own struggles or those imposed by the world around us. For our timed writing exercise, I wrote on the topic of “there are many ways to move forward.”  The result was a personal journal-like muse on facing the daunting work ahead on the revision of a first draft memoir. My writing partner for that session said, “It’s your two hands talking to one another. When one hand cannot write, the other encourages you to keep going.” She knew nothing of Turner and Bobby, but there they were, Turner who wrote the draft and Bobby, the guiding hand of my father.

“There are many ways to move forward.”

My first draft book, Approaching Lavender, about growing up with a gay father, was completed last year as part of a two-year class on memoir writing. By the time I finished and passed it to my beta reader I was weary of the words and the emotions, the revelations. I enjoyed a brief resurgence of hope in the draft’s merit when I received my beta reader’s evaluation. Within a month that high faded. The holidays came and went, I took a job as a tour guide as a retirement gig, eager for the intellectual stimulation. I immersed myself in writing my script, hoping to plan for targeted writing sessions after taking a break from the memoir.

Unexpected challenging times landed and with them an uncertain stretch of “free time.” Whether these free time events happen to us as individuals or a life partner, a family, a community, the world, the illusive gift of time can be exhilarating, even if short-lived like a major snowstorm.  It can also be jarring, be it from a sudden illness, or a pandemic. Whatever the reason, whenever the pause button is activated, the space that opens feels strange as we wait for the signal to move forward.

“There are many ways to move forward.”

It was this open space, the gift of unexpected time that led me to return to my manuscript. I asked myself whether this was truly the time to return to this project. I was plagued by the questions of whether my story really matters anymore. Who would read it? Who would care to hear the story of a gay father and the impact it had upon his life and our family fifty years ago? Turner was telling me to write. Bobby, the hand in my father’s palm, would have to provide the courage to move forward. Bobby, the voice of my father, said, “go forward.”

I hired a writing coach and scheduled time for a deep dive back into my story. My writing coach suggested I consider launch points, other than chronological, to tell the story of being the daughter of a gay man. I tried three different ones, with the voice of Anne Lamott on my shoulder saying, “Bird by Bird.” I also listened to a TED Talk by Elizabeth Gilbert. She spoke of the leap of faith on creativity showing up and how the root of “genius” comes from the ancient Romans and Greeks. It refers to a divine entity, sort of like Dobby the house elf in the Harry Potter series. Creativity results come from the protection of the work, the shared results with the divine, and my job is to show up and let the divine genius in to provide collaboration. I got the part about showing up.

For the past months the object of my focus begins early each morning over my first cup of coffee. My laptop is opened to that completed first book draft, the one I grew tired of last year, the work that after a recent read through is 2/3 shit and maybe 1/3 of any value.

I look for the chapters where the story comes alive. I have thirty-two chapters, a prologue and an epilogue, all of which I have summarized individually with the question of: “What does this do for my story?” This exercise has been time-consuming and heavy brain work but it has moved me forward in that I am beginning to see what parts can stay, what needs to be distilled and what needs to be chucked out. Its hard to let go of “my little darlings” but I find myself more willing than I was in December. I still cling to the prologue and epilogue because I believe in them. But if in the end, they, too must go, then I can more easily accept that and move forward, even if all that I’ve labored to write for the past few years comes down to only a few “good” chapters from which to revise. For, even in this pause in our lives, I remain hopeful that I will look back and remember this time as the moment when I had the courage to take my story to the next level. Even if this is Year three of seven or more years to take my story to its conclusion.

A last, but challenging, part of moving forward is to ignore the ping of email messages, the ring of the phone or text messages. Sometimes I turn them off altogether. I dismiss guilt that I could be engaged in a meaningful conversation with a family member or an old friend instead of writing. Sometimes, I openly admit to a few of them, my selfish need to respond to the call of my own creative endeavors. I tell them, “When I am ‘in the zone’ do not expect to reach me. Leave a message.”

There are many ways to move forward. Pick one for today. Turner will write and Bobby will cheer me on. 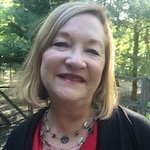 Debra Leishear King is a retired librarian pursuing several genres of writing, from children’s picture books to a memoir about growing up with a gay father. Her off-writing hours are spent walking, kayaking and boating around Lake Monticello, Va., where she lives with her husband and a goofy young black Labrador retriever.

One thought on “Turner and Bobby by Debra King”