There were many reasons I didn’t play with Barbie dolls. Besides being gender-nonconforming before the term existed, besides not liking girls in my class who did play with Barbie dolls, and besides knowing that for every Barbie I was given for a birthday or holiday, there was some present I would have actually enjoyed that I would now never receive, there was the utter anatomical stupidity of that useless toy.

Forget Barbie’s disproportionately tiny waist and large breasts that became famed objects of scrutiny during the then-burgeoning era of feminism . . . what at first frustrated and finally infuriated me was that Barbie had no ankles or knees. Sure, she had bumps in her plastic indicating where ankles and knees would be, but they were entirely unbending, so they couldn’t function even remotely as a simulation of those critical joints. As a result, Barbie could sit, but only with her legs at a right angle to her torso. She could convincingly sit if lounging on one of my father’s handkerchiefs transformed into a picnic blanket but became a dysfunctional freak when I tried casually posing her atop two Kleenex boxes taped together to form a chair. Struck with rigor mortis, Barbie’s legs jutted out as if some phantom examining physician just checked her reflexes with a medical hammer. While Barbie’s complete lack of flexibility in her ankles was slightly less obvious, her downward-arching feet always semi-tiptoeing; perennially prepared for pirouette, suited for little else. This odd foot-flex makes it impossible for Barbie to keep her shoes on. No matter how hard one tries to jam those diminutive pumps onto her flexed feet, they just won’t stay.

This is, if you ask me, the reason so many Barbies go barefoot. And I don’t mean Malibu Barbie, where it makes sense because she’s supposed to be at the beach. Even Bridal Barbie and Prom Barbie are often found predictably formal until you scan to their naked feet.

Of course, after losing one of Barbie’s shoes, you can abandon ever finding it.

Barbie shoes are really just tiny rubber molds. Designed to fall to the carpet in silence, each shoe wields enough inherent bounce to ricochet in thoroughly unpredictable directions, finding clandestine lodging behind, say, a sofa leg. If not devoured by a truly ambitious vacuum cleaner, a Barbie shoe can lay dormant for decades. Eventually, someone moving that sofa will finally accidentally dislodge it and the Barbie shoe will miraculously spring to life, making its perky presence known after years of lurking clandestine. The finder of the shoe will examine it momentarily, flexing it between thumb and index fingertip, and then discard it as the ridiculous and arcane artifact it is. This is the fate I always imagined for my tiniest of lost toys. Toys like the Barbie shoe that were small enough to be shoved inside a Monopoly thimble. Toys small enough to fit inside a cat’s nostril. Toys smaller than a thumbnail, larger than a frozen pea, but smaller than a blueberry.

This is how small, years after I had been freed from the torture of contemplating Barbie or her non-existent joints, my safety deposit box key was. My safety deposit key was not only so ridiculously miniscule it was begging to be lost, it was also illegal to duplicate, making creating a back-up plan an impossibility. I had as good a chance of keeping track of that ludicrously diminutive key in my twenty-something first apartment as I would have had if I had gone to an open field, closed my eyes, and hurled it backward over my left shoulder.

When I first laid my hands on that key, I really didn’t need a safety deposit box. Sure, I collected things of sentimental value, but nothing a thief would steal. Yet I possessed a safety deposit box in my twenties for the exact same reason I had owned an oriental rug in college and sported a fur coat at sixteen—my mother thought it necessary. After procuring the box, I became hard-pressed to find things to put in it. For a while I left a thousand dollars in cash in it, but I don’t really know why. For a different while I left my college diploma in it, until I no longer did. All this was before I lost my tiny key and with it my access to the box.

The first time I lost the key, I was pretty sure it was gone forever. I hadn’t seen it in over a year, during which time I basically had forgotten about the box. When the annual eighty-something dollar invoice arrived, my memory jostled. I had two choices; The first choice, the one where I confess to the bank I lost my key, and they break into the box and replace the locks and give me a new key, would cost $300. That seemed like a lot of money to pay for a box I didn’t really have anything to put in. My other choice was simply not to tell the bank I had misplaced my key and keep paying the eighty-something dollars a year to keep a box to which I had no access. My mid twenties self decided hanging onto an inaccessible locked box was the better idea.

For years I paid the annual fee on that box to which I had lost the key. Then, when moving out of my just-sold first apartment, I spied a little hint of gold wedged in the crevice of a metal kitchen drawer I had been using to amass taxi receipts. I dutifully preserved my endless taxi receipts because my accountant insisted I might someday need them. Taxis were my vice back then. Literally. Some of my peers spent too much money on drugs. Many shopped for more clothing than could ever be worn. I blew most of my paychecks on taxis. I acquiesced to my visceral aversion to subways. Buses I remembered fondly from traveling across town with my brother to the planetarium during our childhood, back when life allowed endless hours to get from point A to point B. And though walking great distances in the city gave me a sense of territorial dominance, when I needed to get someplace fast, I never hesitated to flag down the nearest yellow car. I took at least two, and sometimes four taxis a day—each time requesting a receipt, and each night when getting undressed, into a drawer in my kitchen, ridding my pockets of that day’s accumulated scrolls and crumples. After a few years of living in my first apartment, I amassed a few thousand of those little slips of metered math. When I moved, I transferred them all to a small black garbage bag. While I was knotting the bag closed, a glint hit my eye—the top curve of the lost key beckoned me! Using a butter knife, I pried the key out of the crevice of the drawer and put the tiny key someplace I considered “safe,”; thereby losing it again.

I have always tried in vain to find safe places to put things. Watching To Kill a Mockingbird on TV after school when I was nine, I was so taken with Scout habituating a hole in an old tree and finding treasures of marbles and slingshots there, that I searched out my own hollow hole; experimenting with corners of our large apartment, branching out to the service stairs in the building and to under the sorting desk in the mailroom. I discovered that Upper East Side apartment buildings rarely offer safe shelter for a child’s possessions. Housekeepers uncovered my hidden items around the apartment. Handymen and porters swept away valuables I left in corners of our building.

In fifth grade the fingers of my first baseman’s mitt proved my safest haven, concealing tampons in my classroom cubby, because lockers began in sixth grade. In high school more random safe places harbored the “gems” floating through my life; a gold coin from a country famous for apartheid, a few letters from a correspondence I fell into with reclusive author, J.D. Salinger, a Babe Ruth autograph my father procured as a boy, a necklace purchased celebrating my birth that had purportedly been worn in My Fair Lady. I had a vague perception of value then, and did my best honoring the real or perceived worth of such items by attempting secure storage. I’d stash things around my mess of a teenage room in places I knew others wouldn’t find them—but I became those others, learning “safely” hidden was synonymous with misplaced or lost.

I had misplaced most things by the time I got my safety deposit box. When I was thirty, my mother sold her apartment and moved to Florida. Assuming my safe deposit box was where I would store the deed to her cemetery plot, she transferred possession of it to me. And although I never lapsed paying the eighty-something dollar yearly box invoice, I hadn’t even the slimmest clue where the key now hid. I never mentioned that though, as I “filed” her cemetery deed among some pile of other significant papers in my life. How was I to know she would hold me so accountable? There had been zero ceremony surrounding my mother’s conferring the deed to her plot, she simply stuck it in one of her Vogue article mailings. The articles, always neatly cut out, circled with red ink, and paper clipped together, covered such topics as new shades of plum lipstick or crucial information concerning black purses being the acceptable choice for navy dresses. The consistent reality that I didn’t wear lipstick nor carry purses never dissuaded my mother’s missives.

The cemetery deed was a multi-page, multi-stapled document with a blue vinyl front cover and a black vinyl back cover. It had a big presence. It dwarfed a Barbie shoe. My mother had had to use extra postage to send it, and she never used extra postage. But for all its heft, I couldn’t hang onto the deed any better than I hung onto all the other items of significance that passed through my careless fingers over the years. A therapist conjectured losing the deed was my attempt at postponing my mother’s death. But my mother’s analysis differed; she said it proved I hated her. I argued, to no avail, that though momentarily dispossessed of the cemetery paperwork, upon her death I swore I’d gain her access to her coveted four-by-eight plot of grass and soil, rather than have her decay in her apartment while I searched for official documentation.

If folks want to find me after I die, I hope they look to my children, to books I loved, art I revisited often, music I played over and over as backdrop to dinner parties with killer food, great candlelight, memorable friends. I will always likely misplace bits of plastic, metal, wood . . . trinkets and alleged treasures of all sizes and sorts . . . things too small, too elusive to hang onto. By invoking lofty notions, I assuage my guilt concerning my lifetime of misplacing; the only stuff really worth retaining cannot be buried, locked away in a box, or lost through carelessness.

Besides, many of life’s hidden items are perpetually on the brink of being revealed. Just like Barbie’s shoe—which no matter how insignificant it may seem, still provides a reassuring moment when it reappears. 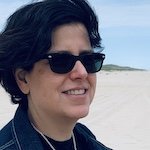