At times I almost convinced myself the Whitman
photograph, signed, would be mine,
instead of the Longfellow which hangs in the big room
in airs chilly and wintry, night falling,
as I listen for nonchalant Walt to appear.
How the thought cheers me, singing

still, for I called Nin’s father, “Dad,” seeing him rise up singing
arumph arumph in his bass-o-roar-re-o: Whitman?
Sure, he said. He was parceling things in a manner to appear
partial to his son-in-law, yours truly, whose mine
I learned not to shout, begetting such failures falling,
even though another relative got the Brady I wanted to put in the big room.

Just a kind of family game, names not making room
for presence of mind when preference comes home singing.
I prefer Whitman for that eye and shaggy beard falling
out of the photo, plus the signature, pure Whitman.
Too, no human being should be able to come up with words to mine
the universe the way he does: the elegy to Lincoln will never appear

again except in wonder when I appear
beside my mother’s lilac in the hedge and see the big room
full of Matthew Brady’s photograph, mine,
on the wall where Longfellow’s singing
for popularity as bard instead of Whitman.
I want to give Emily Dickinson a break, too, as if falling

out of favor in her time (she could not get published), she’s falling
no longer, Hope being the privileged feathers which appear
to sing the song whether Walt’s in Texas or Whitman
is a candy good to eat on holidays in the big room.
So I asked the relative Dad gave Whitman to (the guy loved my singing),
if we could trade. Lo, he said he liked his Whitman. Well, mine is mine.

I picture Long Island going mad not to care over any thought of mine.
I think there’s an occasional thesis written on the word “falling”
in Longfellow’s cares of the day setting and singing,
bringing me joy; his photo and signature, dated 1876, appear
almost in my turns when I turn out the light in the big room
to brighten the corners of my mind as Whitman.

What is in a mind to mine anyway, saith I, to appear
grateful for any falling cares might glare in the big room.
Let nightfall come as singing birds and may I always long for Whitman. 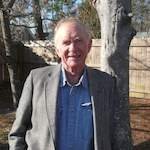 Shelby Stephenson was poet laureate of North Carolina, 2015-2018. He was editor
of Pembroke Magazine for thirty-two years. His recent book is Slavery and Freedom on Paul’s Hill (Press 53).