What I remember of my mother is this: She is down on her hands and knees, crawling backwards along the hallway, scraping old wax from the hardwood boards with a hairpin.

John Thompson lies in a bathtub. He lies in a bathtub, without water, and waits. He is eighteen. He lies in a bathtub thinking help won’t come in time, that he will die. Without finishing high school, without going to college, without ever becoming a rock star like Midler or Houston or forming a band like Guns N’ Roses. Such were his dreams. He is more concerned about his parents, though, about the hurt this will cause them, the grief, and their senseless, inevitable guilt. John is a good son. He has lost his arms.

The books I was given were tucked away unopened so as not to get soiled. My dolls were kept high on a shelf.

John’s aunt comes. He sees the horror flutter across her eyes, the sudden dry swallow. He hides himself in the shower curtain, protects her from the full view. “They’ll be here any sec,” she soothes, stroking his hair. He is afraid but, oddly, feels no pain.

Our house was spotless, the thin grey carpet vacuumed daily, linoleum washed and waxed. My friends were never asked over, nobody ever came in.

John Thompson remembers the machine jamming, reaching down, a tug and one long, hard pull on his sleeve. Then he is running, running uphill to the farmhouse forty yards away, running and panting and jabbing at the latch with exposed bone, running again, faster now, around to the back, working the sliding door with the grisly white blade, pecking uselessly at the phone with his flat, farm boy nose, clenching a pencil in his teeth instead, dialing his cousin, spitting out the pencil and shouting “I don’t have any arms! I don’t have any arms!”

We will read of this. We will read of the volunteer ambulance crew’s arrival half an hour later and their initial shock, of the momentary pause before they gulped down their terror and began to act. Of John’s clear-headed instructions to get plastic garbage bags from the kitchen, retrieve his detached limbs, pack them in ice. Of his humour and courage, wisdom, and incredible strength.

John Thompson is a hero. The doctor will make a speech to that effect. The nearby town will talk of nothing else. His parents weep and pray.

I was ill, lay on the sofa sick to my stomach and spontaneously vomited on the living room rug. I was shouted into the bathroom while my mother scrubbed the mess.

John made his frantic phone call, loped—dying—to the bathroom and crawled into the empty tub. He went there, lay waiting against the cold, unyielding porcelain, not wanting to stain his mother’s carpet. 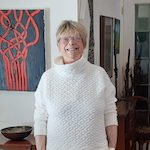 Sheila’s short fiction has been published in Canadian literary journals Fiddlehead, paragraph, The Antigonish Review, Grain, and The Dalhousie Review. Her music-making activities resumed once everyone was sleeping through the night, but COVID has put a temporary halt to playing in orchestras and chamber ensembles. Sheila is happy to once again be writing and submitting from her home in Victoria, B.C., and delighted to appear in Streetlight.