It is autumn. I think of Mary Oliver’s river of loss as I watch the trees burn fragrantly and allow themselves to be naked in their distance from the sun. I wonder about this kind of graceful dying, and how we humans grapple with death and the strangeness of our own faces during the fall season—the dying season. The ghoul-masks, monsters, blood, and skeletons no longer thrill me darkly as they did when I was a child, nor fill me with dread as they did in my early twenties. Then, a very rigid sort of Christian dualism was all that held my mind together and helped me make sense of the acres of dying, and legitimate evil, I had encountered. Now though, these things don’t frighten me so much, as call me to grief.

This year especially, autumn comes with a potent mixture of gratitude and grief. One autumn not too long ago, I turned around to face a part of my shadow that haunted me for decades. I recall a dream I had sometime while studying to receive my Master’s degree in Counseling Psychology, a dream of a winged banshee woman who came at night to steal a bronze medallion that represented my destiny. In the dream, I was poised to kill her when I suddenly knew that, rather than destroy her, I needed to love her. When I woke, I knew that she was a part of myself I have long hated for its particular desire.

I began loving her last fall, and I recall vividly the buzzing in my head and the stone in my throat when I sat in a Karaage restaurant in Belltown, Seattle and came out as queer to my close friends. It was a rainy Friday night, right before a lecture given at my graduate school by beloved author and Lacanian analyst, Annie Rogers. I don’t remember what she actually spoke about—only that I left with a lingering sense of her brilliance and kindness and the depth of someone who has suffered immensely yet remained stunningly whole. After the lecture, I huddled in the back of a car in the parking lot outside of the school and sobbed while my friends offered me presence and touch. They were huge, cleansing sobs, and I cried out black inky masses of all that I have held for a very long time: vitriolic self-contempt, the shame-soaked isolation of secrecy, and the despair of a body that wasn’t “normal.” The rest of that weekend, I felt as though I had undergone a major surgery.

A year after coming out to my friends and Seattle community, I came out to my mother figure. I am still having conversations with myself about what I could have done better, how I could have approached each interaction differently to somehow yield an alternative outcome. Something in me anticipated a necessary separation, and perhaps that is why I waited a year. If I’m honest, our relationship has waned since the last election sent fractures and tremors through even the most tight-knit of families. After the election, there were some things around which we agreed to disagree. Mostly politics. Conversations about racial injustice were implicitly taboo. But I knew the coming out conversation was inevitable and I needed a long while to prepare myself.

I still contend with the temptation to parse whose fault it was that I lost my mother. Some dark part of me wants to wear the blood of martyrdom and victimization, and the other side of that coin is the desire to destroy this woman from whom I am lately estranged. It is a terrible choice to be offered—to remain loyal to old theologies and the people who are still held by them; or to be allied to one’s body and experience. I wonder if losing each other wasn’t the most truthful thing we could have done, as we each gave up fantasies of what the other is, or isn’t, or “should” be. In spite of the complexity and what feels like a horrific bind, I am still grateful. I wouldn’t be alive today if not for the kindness she offered me growing up.

I recently participated in a sacred circle of womxn, facilitated by one of the strange, wise, wild people I have had the privilege of knowing through grad school. The circle of womxn grieved with me the loss of my mother. In fact, they wailed with me. We broke curses off of one another’s bodies, and participated in communal howling and rage-screaming in response to patriarchal systems and body-shaming systems that have kept our wings bound and our mouths sealed shut. We affirmed the goodness of our bodies and the wisdom of our intuition. We acknowledged the goodness of loving and being loved by all true mothers: not only human mothers (whom I have encountered in both male and female bodies), but also trees and wolves and other inhabitants of the natural world.

These gatherings are crucial to the survival of my body and spirit, as are regular, long walks in the woods. The trees offer wisdom and a presence that comforts, nourishes, and enlivens my physical and spiritual senses. Those same friends who sat with me in the parking lot on the corner of Elliott and Wall have stuck with me. They are the family with whom I celebrate Christmas and birthdays. I am grateful for these tree-people with their deep, craggy roots, wind- tossed liveliness, and solid, enduring spirits.

“No tidy way to end these conversations,” and “With grief,” I ended my email correspondences with my mother and with variants of these salutations. It is raining outside, heavy rain that melts the leaves which have already fallen thickly on sidewalks and trails in the woods. 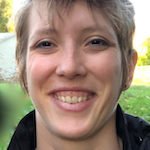 Genevra Levinson is part-dragon, part archaeologist of the human psyche. She resides in Seattle, Wash., where she is a therapist-in-training and a disciple of the blue herons that stalk the rocky shores of the Puget Sound.