I grew up in Virginia Beach where I witnessed damage and destruction of rural and natural lands for the lie called development. I feel levels of anger and disappointment when I see greed eclipsing nature. As poet Gerard Manley Hopkins wrote, “Aftercomers cannot guess the beauty been.”

I now drive around Eastern Virginia and North Carolina and search for ways to preserve rural and natural beauty. This beauty manifests to me in rusting barns, abandoned homes, churches and schools, forgotten tractors, trucks, and plows, as well as fields, forests, and shorelines. I admire the endurance of the buildings and vehicles and the repurposing of nature. I try not to trespass.

My “Beauty of Decay” concept comes from the rejection of society-defined beauty or so-called progress, and as a method of accepting my own decay.

I mostly prefer color to black-and-white because it copies nature. There is certainly great black and white photography, but I usually feel the need to show organic color and tone.

Two photographers have influenced me more than any others: Ansel Adams and my brother, Greg. Adams, of course, demonstrated how to capture nature on gigantic scales, giving argument for why we should admire and preserve natural settings.

Greg is a more experienced and equipped photographer than I. When we were  in college, he once took me to an abandoned factory in Richmond, Va., where I witnessed trees and vines growing inside, rail tracks bent and broken, file cabinets piled and blowing papers, waking me to the idea of lovely decay and/or how nature taking it all back can be exquisite and aware.

The lighthouse, above, is almost 130 years old; it remains somehow sturdy in sand. It must be all the metal spider webs. I found the pilothouse operated by wasps and one lightning bug.

Cotton is one of my favorite crops to capture. Here a ripe cotton landscape pools in every direction, contrasting well with an old barn and tall trees.

Thousands of miles on country roads and highways, and I’ve only found this church twice. Semi-stained windows are overshadowed by a ripping roof. It creaks in the wind like an old boat. 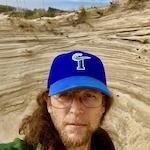 A native and resident of Norfolk, Va., Daniel Pravda earned an MFA in poetry from George Mason University. Pravda was the winner of the 2019 Dogfish Head Poetry Prize for his book, Normal They Napalm the Cottonfields.

His photographs have appeared in The Virginian Pilot, The Norfolk Review, Ponder Savant and All You Can Eat. His work has been shown in the Suffolk Art Gallery and Gallery 410 in Norfolk.

3 thoughts on “Beauty of Decay: Photographs by Daniel Pravda”