The truck stop parking lot reverberated with idling big diesel engines. The air smelled like sour urine. Randal Whitley stood by the open door of his cab smoking a cigarette and drinking his morning coffee. A stick of beef jerky and two chocolate donuts was all he’d had for breakfast, but that was usual. He seldom sat down to eat in the mornings. When he awakened he was wired and anxious to hit the road.

It was drizzling rain in Tuscaloosa, a cool morning for the time of year. Usually it was already hot in Alabama by eight-thirty. Randal Whitley was getting a late start, but that was okay. He didn’t have to be in Fort Worth until Thursday so he had time to kill. He would have over four-thousand miles by the end of the week. That was good money, not that he particularly needed it. He never spent anything much living largely out of the truck. Oh, he kept a little place in Knoxville, but he probably didn’t spend over two or three days a month there. Just long enough to check the mail, get good and drunk and maybe have supper with his sister and them.

He was just getting ready to head out when he noticed a woman coming across the pavement toward him. At first she looked like a young girl, but the closer she came the older she got. By the time she reached him she was forty at least. Sometimes it’s awful hard to tell with whores, especially truck stop whores. “Hey, you look like a nice enough guy. Give me a lift, will you?”

“Can’t,” replied Randal Whitley. “It’s against company policy. Can’t let no unauthorized people in the truck. That means no body that ain’t been approved. Sorry.”

“Aw, come on dude. I’ll make it worth your while.”

“Shit woman, you ain’t got nothing that could. Go on and tag some other driver. I tell you I can’t let you ride.”

“Who the hell’s going to know? I just need to get out of here quick. I don’t care where. You can drop me anywhere just as long as it’s a hundred miles from here.”

“That’s my business, Honey. I ain’t trying to be short with you, but the less you know the better.”

“Sounds like you’ve done got yourself into trouble. Well, I’ll give you a lift as far as Jackson, how’s that?”

“Great! Thanks!” she said. It was unusual to see a lot lizard in the daylight. They most often did business between one and four in the morning. She wasn’t really a lot lizard. She didn’t quite deserve to be called that. She was by no means attractive, but she wasn’t an out and out skank either. She had long, dirty blonde hair and lots of eye makeup that gave her the initial appearance of being a zombie or something, but underneath all of that she wasn’t that ugly and she had a right nice body.

“Get on up in the truck,” he told her. “Ain’t you got no bag or nothing?” She shook her head. “Well . . ” he said and let it trail off questioningly. He didn’t care. It made no difference to him. As a matter of fact he was already starting to regret his decision to let her ride along. He watched her climb up into the cab. Then, he got in and slammed the door.

“Oh shit,” she said with a startled gasp. “It’s Rodney!” She quickly ducked down behind the dashboard. Randal Whitley looked out across the parking lot. Coming through the trucks was a big man dressed in a black leather vest and cowboy hat. He looked angry and he was headed his way. The man stopped at the end of the row and stared down as if he were searching for someone. He turned to look the other way. Then, the guy caught a glimpse of Randal Whitley sitting there behind the steering wheel. He walked hurriedly over never taking his eyes off him. The guy was carrying a damn baseball bat.

“Stay down,” Randal Whitley said to the girl. He tried not to move his lips as he spoke because the guy was watching every move he made. The driver’s side window was rolled down. He wished he could put it up, but it was too late for that. In a moment the guy was standing by his door.

“You seen a woman around here?” said the guy.

“A slinky damn blonde with a short jean skirt and high heels.”

“Yeah, I seen her go up that way a couple minutes ago. I think she went in the restaurant, but I ain’t sure. She your old lady or something?”

“Shit, she ain’t my old lady.” He lifted the baseball bat and slapped his other hand with it suggestively. Then he turned and walked away.

“Damn, I thought he was going to climb up and look in. Who is that sucker anyway? He your pimp?”

She laughed. “Nobody calls them pimps. He’s my manager. Hell, he’s also my damn cousin. Come on; let’s get out of here before he comes back. If he finds me he’ll beat the hell out of both of us. He’s crazy as bat shit.”

“He ain’t going to beat me,” said Randal Whitley as he reached over and pulled a thrirty-eight snub nosed revolver out of the console. “I’ll blow the motherfucker to kingdom come if he tries anything with me!”

“Just let’s go,” she pleaded. He shifted the idling diesel into gear and released the air brakes. The big truck hissed and then began to move slowly out into the lot. In a minute they were on Interstate Twenty and headed west. The woman raised her head and looked out wide eyed. “God, that was close.”

“Well Honey, you’re safe now. Get up out the floor.”

“What’s that on your dashboard?”

“It’s just for looks. I picked it up in San Francisco. I just think it’s cool.”

“Hell no!” he laughed. “Who ever heard of a bogleheaded Buddha?”

“You got a cigarette?”

“Yeah,” he said. “Here.” He reached into his pocket and handed her the pack. She smiled. She had a right pretty smile. It seemed almost clean. For an instant she didn’t seem like a whore.

“That Buddha thing has some fucked up ears.” He didn’t say anything to that.

As they drove, he got to know her. He even started to like her, but when they reached Jackson she said goodbye and climbed out. He watched her as she crossed the grass and into the rest area bathroom. He had allowed himself to fantasize about how things might have been different, how it might have been if he’d met her under different circumstances and if she wasn’t a whore and he didn’t drive a truck. He laughed again with a hint of chagrin. Things just happen, don’t they? It really didn’t make any difference. He looked at the Buddha on his dashboard. Like always, it was smiling back. 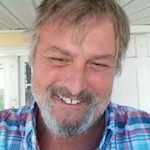 A native of Southwest Virginia, James William Gardner writes extensively about the contemporary American south. The writer explores aspects of southern culture often overlooked: the downtrodden, the impoverished and those marginalized by society. His work has been nominated for the 2016 Pushcart Prize. Gardner is a graduate of Virginia Commonwealth University and lives in Roanoke, Va. His work has appeared in numerous publications including Deep South Magazine, Newfound Journal, and The Virginia Literary Journal.