I have worked with children in Bosnia, crocodiles in Mexico, frogs in Puerto Rico, egrets in Bali, mushrooms in Montana, archaeologists in Spain, butterflies in Los Angeles and lectured on island evolution and marine biology on cruise ships in the South Pacific and Caribbean.

I believe the same skills one uses to understand science are those used for art. Impartial observation of what is before me. Then I concentrate to see the underlying colors and shades in each white wall or dark shadow.

I’m an ardent naturalist and love animals.  I was the founding Art and Science Director of Esperanza’s Community Housing Corporation in South Central Los Angeles. I worked there for 16 years. We created murals, butterfly gardens, and for a brief time, changed our bit of neighborhood by the introduction of monarchs into South Central. I passionately believe in combining art and science. It’s is the way to really see, understand and improve our community and our world.

My mother was a pianist and teacher and my father a writer, so I grew up in the Hollywood Hills, right above Universal Studios, surrounded by arts. I studied and dance ballet, got into theater and Improv. But I always drew. In my early twenties, I studied at the Brooklyn Museum art school, although I’m mainly self-taught. The first time I tried to paint, it was a muddy mess!

I adore the Impressionist painters, especially Cezanne and Van Gogh. I’m in awe of Dali, Thomas Hart Benton, Tamara De Lempicka, Hopper, and, and, and…

I also am drawn to dark images. I like imagining the hidden lives behind windows in the night. I like mysterious streets and film noir.

I think painting is all light and shadow. Color and light. Diagonals that guide your eye through the painting.

I spent a few years in a Mexican magic town and many working with the Latin community in LA. I believe all the light, color, and enchantmentof their culture influenced me. No place is so full of color and light, hope and fear. They  decorate with shadows. The nights shimmers with ghosts.

All colors absorb light reflecting a single hue back to the observer, except black. Black absorbs all light. It rarely occurs in nature, and only then in minerals. I never use black; instead I use mixtures of umber, acra and phalo blue which look dark, but unlike black, draws the viewer into the painting. A good exercise can be to paint brown shadows, then blue shadows. Highlight with white mixed with just a touch of yellow or blue.

White reflects all color. Look at a “white” wall and concentrate. You will see browns, blues, yellows, magentas and infinite shades of reality.

In creating my paintings, I apply thick paint with brushes. Sometimes I use a buildup of spackle. I prefer thick acrylics and love iridescent paints.

Especially with portraits, build up of paint, though invisible to the naked eye creates a more dimensional face or figure. When I “get” a face right away, it is often not as good as when I have to work at it, because there are fewer layers of paint built up. But, be careful, texture can work for or against you.

I make detail as intrinsic a part of the painting as the focal point. By emphasizing the details that form the whole, I emphasizethe mood. Since emotion is shaped by the totality, my pieces focus on emotion. Life is not simple, emotionally or visually.

Besides cityscapes and portraits, my other works include nudes and fantasy.

In 1989, I was chosen by the Esperanza Community to paint an interior mural in their new building. They wanted something that would involve children but look professional. I conceived the idea of the Cut-Out Kids – life-sized portraits of local children holding up blank pieces of paper. The children painted their own images in the space provided. This gave them complete artistic freedom.

I later created a traveling exhibition of The Cut-Out Kids – free-standing, life-sizedfigures backed on masonite. These Cut-Outs were exhibited at the LA County Museum of Art, City Hall, Kid’s Space Museum, and many other sites about town.

The children attended the opening as both subjects and artists. They received a lot of recognition, and students told me that it was life changing.

In 2000, ECH turned a two-story abandoned sweatshop into Mercado La Paloma, a place for home-made restaurants, shops and non-profits. I painted the mural, Meeting of Minds to cover a graffiti of fraternity insignia on the west wall.

A Meeting of Minds is meant to portray the ideal world as an outdoor marketplace. The mural pictures the flow of ideas from the last millennium through to the present and into the future. Among those pictured are Albert Schweitzer, Albert Einstein, Leonardo da Vinci, Rosa Parks, Eleanor Roosevelt, Aldous Huxley, George Bernard Shaw, Mahatma Gandhi, Charles Darwin, Nelson Mandela, Martin Luther King Jr., Cesar Chavez, Ann Frank and Charles Darwin, to 90 year old Sister Diane Donoghue and young artists and babies in our community who continue to advance the philosophical ideals that create and foster a healthy, diverse, peaceful and beautiful community.

Later the head of the non-profit program for torture victims, told me that the he took all new clients to see the mural, “to show them everyone belonged.”  That was pretty cool.

I can’t improve on nature, but maybe I can add or comment on man’s additions to the earth. 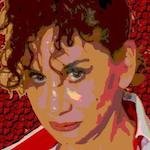 Elizabeth (E.E.) King was the founding Director of the Esperanza Community Housing’s Art & Science Program. She has worked as an artist-in-residence in Los Angeles, San Francisco, Sarajevo and Bosnia. She was an advisor to the J. Paul Getty Museum and Science Center and headed their Arts & Science Development Program.

A new resident of Venice, Ca., King has won two International Tides Painting fellow-ships and two Earthwatch Fellowships. She served as Science and Art Coordinator with the Global Children’s Organization (GCO), working in a Bosnian summer camp for war orphans.

Besides her landmark mural, A Meeting of the Minds, in Los Angeles, King has also painted murals for Escuelas Para La Vida in Cuneca, Spain and in Tuscany, Italy. She was represented by Los Angeles County Museum of Art, sales and rental gallery from 1995- 2001. Click  to see more of KIng’s work. Follow her on twitter, facebook and another of her sites, https://whatsinanafterlife.wordpress.com/.

In addition to her painting, King has been widely published and won various awards and fellowships for art, writing, and environmental research. Ray Bradbury called her stories “marvelously inventive, wildly funny and deeply thought provoking. I cannot recommend them highly enough.”