I was on the patio in my lounge chair journaling. The year was 2017 and I had been living in Los Angeles for the past twenty-three years, having moved from Chicago. I loved my husband Dave, family and friends but I hated my life. I no longer had a passion for anything.

In the past I did have passion working as a dancer, actor and singer for thirty-four years, but I did not feel I was successful because I only had a very small savings, enough to last me for two months. I went from paycheck to paycheck and I was tired of working so hard and not getting anywhere. So, when I was fifty-three, I decided to open my own business that would give me a passive income coming in and I would not have to struggle so much financially. I thought, “I know a lot of actors, singers and dancers in the industry, why not open my own talent agency?” This would give me a chance to go back into acting when I got my business off the ground.

Ten years later my business was doing fairly well, but passive income typically means that you continue to make income with no or very little effort on your part to maintain that cash flow, but I was still working long hours every day at my business and had not returned back to acting.

Ten years had flown by just like that. I was now sixty-three. As I sat journaling in my notebook, I thought to myself, “What happened to my life? Where did all my dreams, plans and creativity go?” I stopped journaling and sat very still in my lounge chair thinking, “There has to be more to my life than just running my business.” There was more to my life I concluded, but if I wanted more in my life then I would have to make it happen myself.

I finally came to the conclusion that while continuing to do my business, it was time for me to get back into acting. As an actor, I always thought that I could help people get in touch with their emotions. I could make them laugh, cry or even inspire them.

I was so excited about my decision and then my interest waned when I realized, “I’d probably have to start out with commercials because it would take a while to break back in.” I never liked commercial auditions because when I did them you didn’t get a copy of the script until you arrived at the audition. I have dyslexia with reading, speaking and seeing, which means I always had to work harder to compensate in all areas of my life. Also, I would need to brush up and go back to acting classes and get new pictures because my old ones were ten years old and outdated.

I was willing to put in the work that I needed to do to get back into acting while continuing my business because it was my only livelihood. That settled in my mind, I relaxed in my lounge chair when suddenly I looked down and saw a snake staring at me. Alarmed, I jumped up and ran into the house to get Dave. When we went back out to check he said, “Where is the snake?”

I looked closer. I realized that Dave was right. It was just a large lizard sprawled out on the root of the tree. I could relax now knowing that it was a lizard.

I opened my eyes and the lizard was staring at me as if to say, “Well, what is it—acting or strolling?”

I looked down at the lizard and said, “Smartass.” Then this idea popped into my head; google what the spiritual meaning of lizard represents. I googled lizard and it said, “Lizard is a powerful animal, prompting the energy of change. Leave the past and quit being attached to what has been. You need immediate change in one or more areas of your life. Let go of old ideas, patterns, belief systems and habits. Move into a new chapter in your life.”

I got it. I needed to write my book on strolling. I felt at peace and I gave the lizard a smile. I ran inside to tell Dave about my revelation. When I went back outside the lizard was gone. She had done her work. Now, in writing my book, if I could inspire just one person to stroll, like the lizard, I will have done my work too. 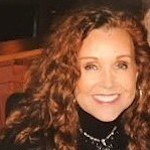 Susan Lubeck Moriarty began journaling when she first got sober. Up until then, she had never put pen to paper for fear of her dyslexia and spelling. After a thirty-four year career in theater, performing all over the United States, Canada and Europe, and her own show on the Las Vegas strip, and talent agency business, the Coronavirus brought her business and life to a standstill. It was then that she started writing her book on strolling which helped her to deal with years of grief, anger and depression.

9 thoughts on “When the Student Is Ready, the Lizard Appears by Susan Lubeck Moriarty”