The sound of rustling leaves, like old fashioned petticoats, soothed the cold lodged like a stone above my brow. Compliant for once to the vagaries of my body, I stretched out on the floor letting my mind wander toward the Blue Ridge sprawled across the horizon in a color I love because of its smoky calm. How relieved my father would be to see where I live.

In a rare heart-to heart conversation two years before his death in 1992, I told him how unhappy I was in my marriage of thirty years

“We’ve come apart like a seam in a tired piece of cloth. I want to write and breathe clean, fresh air, but Robert is happy here in this big white house, the water a stone’s throw away. The only thing he dislikes is my insomnia. The only person he dislikes is my analyst. He’d shoot him if he could get by with it.”

A smile lurked abound my father’s lips as I concluded, “The children have their own lives, and now I want mine.”

I will be forever grateful that my father made no mention of the question that burned in his heart: And who will take care of you. Instead he spoke of companionship and the solace of familiarity as infirmities caw round the aging body and one’s way seems lost. Early on my parents lost their way, but separate they did not. Clearly, in my father’s mind, that was a wise decision, for my mother was not alone when she died.

The steadfastness of generations showed in his high brow and clear blue eyes, the definite nose and straight mouth not given to long phrases. Tall and slim, he wore his traditional suit, vest and tie. How handsome he is, I thought. For a moment I was a child again and he and I were walking around the block after dinner. “There’s the Milky Way,” he would say, “and there’s Canis Major” as I pretended to see the star in Upright Dog’s eye. At nine, I was much more interested in the rare experience of being alone with my father than in locating constellations in the heavens.

I’ve forgotten much of what he said as we sat in the sun-drenched living room of my home, but I remember the omissions—no mention of whiskey or tension like fog that floated throughout our house. My father’s memory was exclusive because of the empty places he didn’t know he had. Nonetheless, the words under the words were not lost on me. They were ripe with belief that living alone is no life at all. It made my heart hurt to see my father’s concern for me. I gave him a big hug wishing I could squeeze the cancer out of his chest.

A decade later, and here I am thinking of his last morning—the way my stepmother had described it.

He lingered in bed with a crossword puzzle on his chest. Yes, he would be down for breakfast. No, he didn’t feel any worse. “But there were tears in his eyes,” she said.

Recalling her words I wept, not for myself, but for my shy, resolute father who knew, as he knew the inevitable tithe of his summer corn to the raccoons, that he was about to leave everyone and everything familiar to him.

What my father believed about God or death I did not know.  It was one of the things, like sex, we never discussed, but I grew up watching him turn the parchment pages of his Bible with reverential regard. It lay on his bedside table along with Shakespeare, Yeats and the New York Times magazine section. How, in his mind, Scripture stacked up to Hamlet or King Lear, or how Paul’s conversion compared to Blake’s turning toward a life of mysticism, or if he actually considered eternity a possibility— these were all mysteries. I was sure of only one thing: He died without argument, without fear and without going through the door his generation was told to keep shut. Don’t talk, don’t complain, and don’t feel. I was pretty sure the underpinnings of life . . . the dreams he had, the impulses, the hunches, the changes of mood remained thoroughly hidden. So I wept for that, too.

I cried off and on for hours . . . those selfless tears that come so infrequently. Guilt and a personal sense of loss were not part of my sadness. Regret, yes, but primarily sorrow, and sorrow is different from the pain of grief. Grief bleeds for itself. Sorrow connects you to the other.

All day I carried on little conversations with my father reassuring him that I had come through a dark wood into a space I had cleared for myself.

By late afternoon, remembering bills that need attention, I moved to my office.

I was deep into budget revision when I sensed light coming from somewhere other than the waning of the day or the dresser lamp behind me. Curious, my concentration broken, I looked out at the gathering darkness at what I can only describe as a supernatural brilliance.

Had I been an astronomer, I might have recognized some rare place in the universe: had a shepherd’s crook rested on the arm of my chair I might have believed the Star in the East: no way was it a planet or star, too bright, too many points of light streaming through the windows just above my desk.  Disbelief moved me into the kitchen. Yes, it was still there. Wanting my new husband to see it, I rooted around for my shoes, flew down the steps and ran toward the barn. ”Ed, Ed,” I shouted, pointing with  my arm, “look.” The radiance was nowhere to be seen in what was now a night sky.

I fell asleep wondering if I’d read about a celestial phenomenon in the morning paper. It astounds me now that I looked even briefly in the noisy world for an answer. The whole day had been spent in a quiet, holy place, and that place was inside me in a room called Remember. We all have this room. The door might slam shut, the roof cave in but nothing can destroy it.

I like to believe that’s where I went. For a few hours the world around me didn’t exist and I was bound to my father in a common fate that allowed for the deepest levels of compassion, sympathy and empathy. The wall that seems to separate life from death came tumbling down and two people straddling two worlds were inexplicably linked. 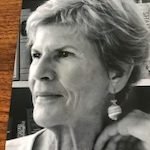 2 thoughts on “A Room Called Remember by Mary McCue”