said If you become a soldier, you’ll be a general.

A Spanish Napoleon,don’t you think?
Face a bold triangle. Wide nose and brow.
His mother said,If you become a monk,

you’ll end up as the pope. Yes, wouldn’t he have

been Leo X with mistresses and power?
But his eyes, oh, my dear, you can’t turn
from those eyes. Large and oval with black

centers that absorb the world.
Picasso said, Instead I became
a painter and wound up

She could be Queen Elizabeth the First
with ruffled collar, aquiline nose and starred,
startling eyes, so arresting you stop

to stare back, to question.
What had she to do with Picasso,
our hot and steamy Spaniard, who preferred

Iberian royalty, his women sultry and south
of England’s cold green Iles. Was he so taken
by Matisse painting his wife topped by a wild chapeau,

stirring the artists of nineteen-five into a frenzy,
that he, Picasso, had to try his wide prolific hand
on a lady in a hat? And what of this hat? By no

means a crown, nor a beret, his favored attire. No,
hers a quirky, clownish lid for the red hair
flaming out. Some secret hidden here,

painted with whimsy and care
by a man who cubed his women,
capturing this one in a square. 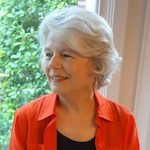 Diana Pinckney is the author of five poetry collections. Her work has appeared in many journals and magazines, print and online. She has been awarded the 2010 Ekphrasis Poetry Prize, Atlanta Review‘s 2012 International Prize and Press 53‘s 2018 Prime Number Award.