Primarily a poet and writer, I came to photography by accident. I was on a summer nature walk in southern Ontario, Canada, when I got lost. It was incredibly hot and I had forgotten my water. My wife had given me a phone with a camera. Instead of rushing and panicking, which I knew would make things worse, I walked slower to preserve energy and remain calm. In these woods which I would come to know better in the future, there was plentiful wild red sumac at a colorful and vibrant intersection where two forests meet. I began taking pictures of these trees. The fullness of the leaves, and the play of light and shadow all fascinated me. As I went along, I took more pictures of branches and trees. Documenting nature added to, if not a sense of calm, then the chance of not panicking. I had a focus.

I pretended I was not lost. Eventually, I arrived at a small foot path which led to a larger trail. It took a long time, but I found my way. And in taking close-ups of tree parts, I became enamored of the process and resulting photographs. Now, years later, the close-up of leaves and flowers is my ‘go to’ or staple shot.

Most of my work takes place in the York region forests, on and around a series of long and sometimes labyrinthine forest trails. If photographing the same field or farmhouse, I believe, it’s the artist’s job to see it newly, to find what is hidden, to make it interesting, the proverbial ‘digging deeper.’

in Ontario, we are blessed with four seasons so the same places do eventually change. We enjoy overcast to sunny, or winter to spring as well as the opposites. I have grown to love the opacity of the textured firmament with no sun, or the autumnal places bleak and gloomy. All mise en scene are there for the shooting.

In street photography, I love shooting a variety of scenes. I call my recent work, Mosaics, Journeys through Landscapes Urban and Rural. These Mosaics allow me to switch gears—framing a colorful far away Cuban street scene to a close up of frozen mushrooms in a winter forest. I have found that simple scenes like the lights of the Canadian petrol station at night after the rain and snow are also attractive aesthetically.

Although I see many photographs I admire, I believe that the figures I respect most have influenced my choices in interesting ways. Some writers I appreciate are Cormac McCarthy, Jack Kerouac, and Henry Miller. Miller also painted many watercolors. Musically, I like Mazzy Star, Tom Waits or Van Morrison—whom I find soulful. More direct visual influences include the Impressionists, and my favorite painting, The Falling Rocket (Nocturne in Gold), by James Whistler. I also admire filmmakers such as Frederico Fellini, Terry Gilliam and Stanley Kubrick.

Another influence on my photographs is Nonduality, a spiritual study and modern term for Vedanta and Advaita texts and teachings. I was involved deeply with an investigation into this study for a long time. I believe its search for awareness influenced my ability to see the world in a more interesting light. What may have been thought of as prosaic, such as street gas station signs or electric lights, prior to this spiritual practice became magical after it.

If there is a shift in consciousness or a reconfiguring of how one sees the world, the world can appear enchanting in its newness. Nonduality points to seeing reality as it is as being the spiritual goal. So the orthodox or regular, be they objects or places, skies or even tree leaves, are seen freshly or with childlike wonder once again.

These days, when I walk in the forests or on a roadside, I see in this new and joyous way. Getting lost now and again can turn into a productive creative pursuit. 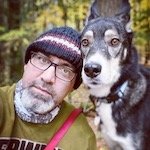 Brian Michael Barbeito lives in Auroa, Ontario, Canada. He is a poet, writer, and photographer. His work has appeared at Fiction International from San Diego State University and in CV2, the Canadian Journal of Poetry and Critical Writing. His photography currently is published in the winter edition of Riddle Fence, The Journal of Arts and Culture. A novelette appears in The Notre Dame University Review’s best of the best issue in January 2021.

One thought on “Finding Photographs by Brian Michael Barbeito”