My friend looks like he stands tall and straight.

But for fifty years, he’s lived in his brain.

He can’t bear you to know

he can’t bear his body.

Hidden inside, a fiddlehead,

curled to protect a tender secret

it’s not in vogue to keep.

After the death of one parent’s wits and another parent’s heart,

he tries on the latest fashion.

But bravery carries a price

his sister makes him pay.

And with half a century of silence,

his fetal back is broken.

Unfurling is nothing but pain. 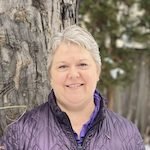 Sara Dovre Wudali is a writer and editor from Saint Paul. She grew up on the plains of southwest Minnesota, where the wind blows strong and box elder bugs rule the earth. Her work has been published in North Dakota Quarterly, Creative Nonfiction, Sweet, Saint Paul Almanac, and as part of a public art project in Mankato, Minn.